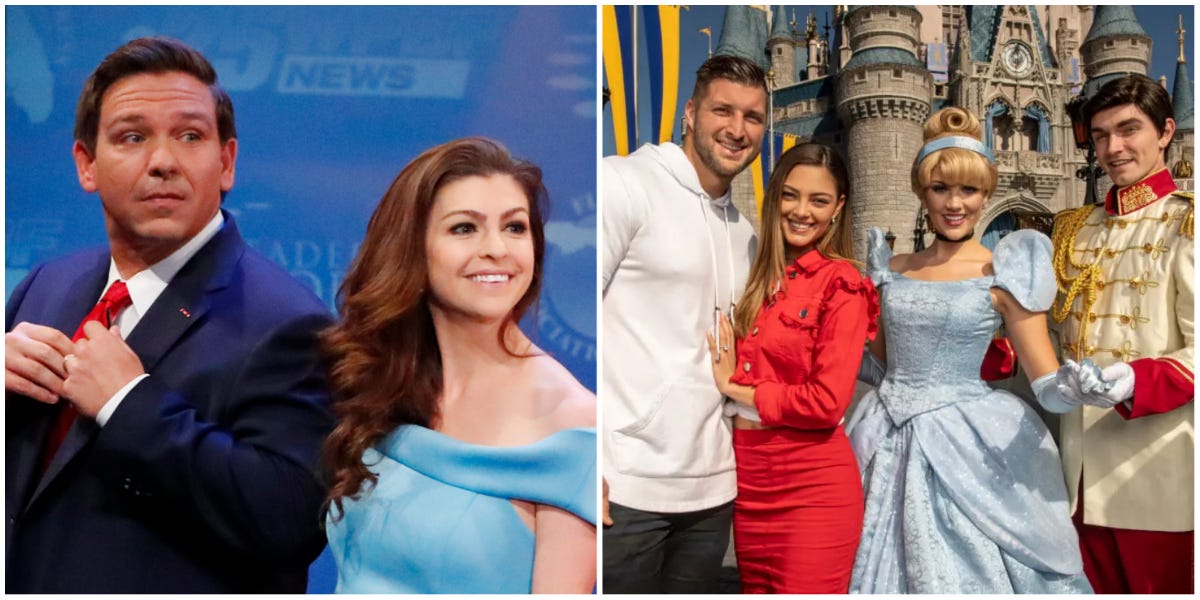 Florida governor Ron DeSantis and his wife Casey got married at the Walt Disney World Resort in 2009.

Insider's Kimberly Leonard reported that the couple exchanged vows at the Grand Floridian's wedding pavilion, a chapel overlooking Cinderella's Castle and the Seven Seas Lagoon at Disney World. The reception was held at Epcot's Italy Isola, in a nod to the couple's Italian heritage.

Their choice of venue is ironic considering DeSantis' recent feud with Disney over the Parental Rights in Education Act. Dubbed the "Don't Say Gay" bill by critics, it bans instruction about sexual orientation and gender identity from kindergarten through third grade. After DeSantis signed the bill into law in March, Disney, which has championed gay rights since the 1990s, said it would work toward its repeal. In response, DeSantis asked the legislature to send him a bill stripping Disney of its self-governing status starting in June 2023.

Mariah Carey and Nick Cannon renewed their vows at Disneyland in May 2013.

On the fifth anniversary of their wedding, Carey and Cannon renewed their vows at Disneyland's Sleeping Beauty Castle, followed by a reception in Fantasyland, People reported. The celebration featured 15,000 flowers, a fireworks show, and park rides that were kept open for guests to enjoy.

The reception, held after the park had closed to the public, featured a private showing of the pyrotechnic show "Fantasmic!," a fireworks show, and two wedding cakes, People reported.

The "Glee" star proposed to her girlfriend of three years during Gay Days Anaheim, an annual event where over 30,000 LGBTQ+ people and allies visit Disneyland, according to The Advocate.

"It's the happiest day of my life," Casteen told the outlet. "I never thought I'd find somebody that is so loving and kind."

"She said yes!" Bleu captioned an Instagram photo of Clements' ring with Cinderella Castle in the background.

In April 2015, former skateboarder and reality TV star Rob Dyrdek proposed to model Bryiana Noelle in the middle of the "Aladdin" show at Disneyland.

Dyrdek appeared onstage riding an elephant to surprise Noelle, who accepted his proposal.

"She was definitely confused, but not that surprised, when you date me you become accustomed to my version of normal," Dyrdek wrote on Twitter.

They married in September 2015.

"YES HE DID!!! It was perfect!" Coggeshall Dixon captioned an Instagram photo of the ring.

They married each other the following year.

The couple was dining at Club 33, a private club inside the Disney park, when Stoll popped the question.

"We went there for Christmas to see the Christmas decorations and we had a lovely dinner there and he did it right there at dinner at Disneyland," Andrews said in an appearance on "Good Morning America."

Stamos surprised his girlfriend with a short film compiling romantic moments from Disney and Pixar movies, People reported. At the end of the film, Sebastian the crab instructed Stamos to "just ask the girl" — a play on the song "Kiss the Girl" from "The Little Mermaid"

Stamos announced their engagement in an Instagram post featuring an illustration of the couple with Sleeping Beauty Castle in the background.

"I asked…she said yes! …And we lived happily ever after," he wrote.

The couple returned to Disneyland to celebrate their first wedding anniversary in 2019.

"Congratulations @timtebow & @demileighnp on your engagement!" the post read. "Wishing you a happily ever after. #DisneyEngagements."

After the pandemic upended their wedding plans, Fisher and Woods held a scaled-back celebration at Disney World. They exchanged vows at midnight in the courtyard of Cinderella Castle, then rode down Main Street while accompanied by Fisher's song "Happily Ever After," which he recorded for the Magic Kingdom park.

"We had to truncate everything, but even though it was small and sweet, it was very intimate and personal," Fisher told People. "I had enough time to make eye contact with every guest that was there and got to soak in that moment with each individual person."