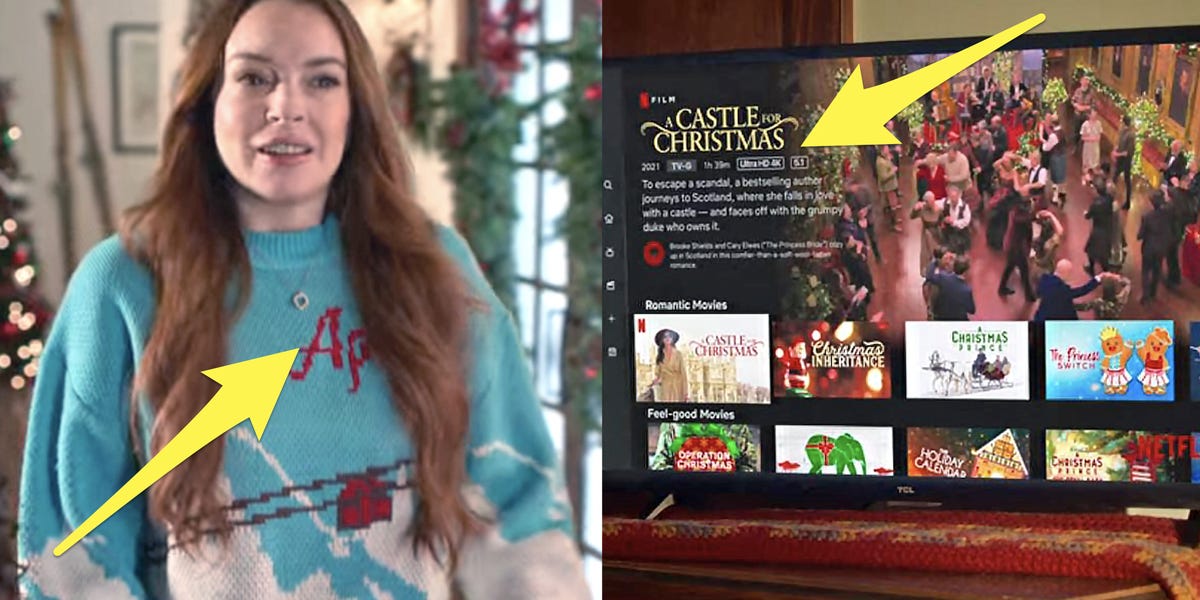 Jake had a top on his drink cup, but it disappears before he spills it on Sierra.

The cup clearly has a top on it when Beau hands it to Jake, but it's missing moments later when Jake is walking around the resort lobby — conveniently right before he bumps into Sierra.

The top of the cup may have helped prevent him from spilling his drink on Sierra and getting kicked out of the resort.

The North Star Lodge has a horse named Balthazar.

Balthazar (also spelled Balthasar) is biblically one of the Three Kings or Wise Men in the Gospel of Matthew's story of Jesus' birth — in particular, the king who presents the child with the gift of myrrh.

Furthermore, the Wise Men followed a guiding star to Jesus' birthplace, which matches up with the name of the lodge.

When Jake talks to his family, an empty reservation list is on his computer screen.

Jake's computer screen shows a reservation list with only one line filled out, illustrating how dire the financial situation is at the lodge.

There's also only one key missing from the wall behind him, which the lodge's only guests return when they leave later in the movie.

There's a reindeer on top of the building Sierra stays in at her father's resort.

The building Sierra stays in at her father's lodge has a small piece of reindeer decor on the roof that doesn't seem to be on any of the other buildings.

The inside of her father's room is decorated with more reindeer-themed items as well, including a set of lamps and a decorated wall canvas.

The snow globe that Sierra picks up, which reminds Sierra and her father of Sierra's late mother, also has reindeer in it — so the other decorations could potentially be symbolic for her.

Sierra sings a few lines of "Jingle Bell Rock" in the car with Tad before he rudely stops her.

In the lead-up to "Falling for Christmas," Lohan even released a new cover of the song.

Ironically, "Jingle Bell Rock" was also one of the solos Chord Overstreet, who plays Jake, had on Fox's "Glee."

Much of the plot resembles another iconic rom-com.

Amnesia has played a part in many rom-coms over the years, perhaps most famously "Overboard" (1987).

In "Overboard," a wealthy woman falls off a yacht, forgets everything about her life, and falls in love with a widow — despite being married to a man who does little to try to remedy the accident.

Although Tad is actively trying to get back to Sierra throughout "Falling for Christmas," many of the other main plot details are similar.

When Sierra wakes up at the lodge the day after her accident, she instinctively reaches for her nightstand — presumably to grab the remote that powers the blinds, as she did in the first scene of the movie.

Instead, the remote she picks up turns on the TV in her room.

It's a little odd that she seems to remember that level of detail from her old morning routine when she doesn't even know her own name. A similar thing also happens when Sierra briefly remembers she "doesn't do bacon" at breakfast.

When the TV turns on, the title cards for other Netflix holiday movies are shown.

When Sierra accidentally turns on the TV, she's startled by the sound and knows her life didn't return to normal overnight.

The TV immediately opens to Netflix, and the top line of title cards is queued up with original holiday movies like "A Castle for Christmas" (2021), "The Princess Switch" (2018), and "A Christmas Prince" (2017).

The trailer for "A Castle for Christmas" even starts playing before Sierra can shut it off.

There are five stuffed animals on Avy's bed, but she only lists four names.

Avy introduces Sierra to the stuffed animals on her bed, hoping it'll help her choose a name since she still doesn't remember hers.

Avy lists the names Frankie, Wallace, Potter, and Sarah before they land on the last one. But there's a fifth stuffed animal whose name isn't mentioned.

Sierra's sweater has a similar design to a painting in her room.

One of the items Sierra borrows from the lost and found at the lodge is a blue sweater with a ski-lift design on it.

The sweater pretty much matches one of the paintings in the guest room she's staying in.

The painting has a blue background that also features a red ski lift and the words "Les Alpes."

The moment after Tad wakes up seems to reference a Jim Carrey film.

When Tad wakes up in Ralph's fishing cabin, he looks at a newspaper article from July 21, 1969, hanging on the wall with the headline, "Man Walks on the Moon."

The article is very similar to the one shown in the Jim Carrey movie "Dumb and Dumber" (1994).

When Tad reads it, he says, "no way," which is the same line Carrey's character says after seeing the paper.

The bloopers in the end credits directly quote"Dumb and Dumber" again when Tad exclaims, "We've landed on the moon!"

The guest book Alejandra has put together includes personal notes from guests, photos, and items from the lodge.

There are notes from guests thanking them for delicious food and a wonderful time, photos from weddings, and an old pass for the ski lifts.

Many of the lodge's guests are from Summit Springs, but even out-of-towners seem to be very connected to the town.

Many of the listed guests are from Summit Springs, the fictional town where the lodge is located. But completely made-up states and zip codes are provided for those who aren't, including Falls River, OZ, and Falls River, ZA.

There's even a fake French address from the fictional town of Tascherea, France.

What's even more puzzling is the fact that two contacts who aren't from Summit Springs have email addresses that end in @summit.flx. All of the provided phone numbers of both local and out-of-town guests also start with "555."

The couple who honeymooned at the North Star Lodge is wearing wedding-like clothing.

When people from the community are stepping up to donate money to the North Star Lodge, a husband and wife thank Jake for letting them have a free honeymoon at the lodge years ago.

As they give their speech and present their check, the woman is wearing a nice white gown and the man is wearing a suit with a bow tie — not unlike what a bride and groom would wear at a wedding.

When Sierra and Tad talk on the phone at the start of the movie, she mentions that he wanted to keep their relationship private.

This makes the press conference revealing their engagement even more of a surprise to Tad's many followers, who presumably didn't know he was even dating anyone.

But Tad's dramatic way of announcing his relationship with Sierra seems fitting for his influencer status.

Avy's wish was teased earlier in the movie.

Near the end of the film, Avy tells her dad that she wished for him to find someone to love when she went to the wishing tree with her grandma.

Earlier in the movie, Avy can be seen writing the wish. It read, "I wish my," cluing viewers in that she might be about to write "my dad." But the camera cut away before showing the rest.