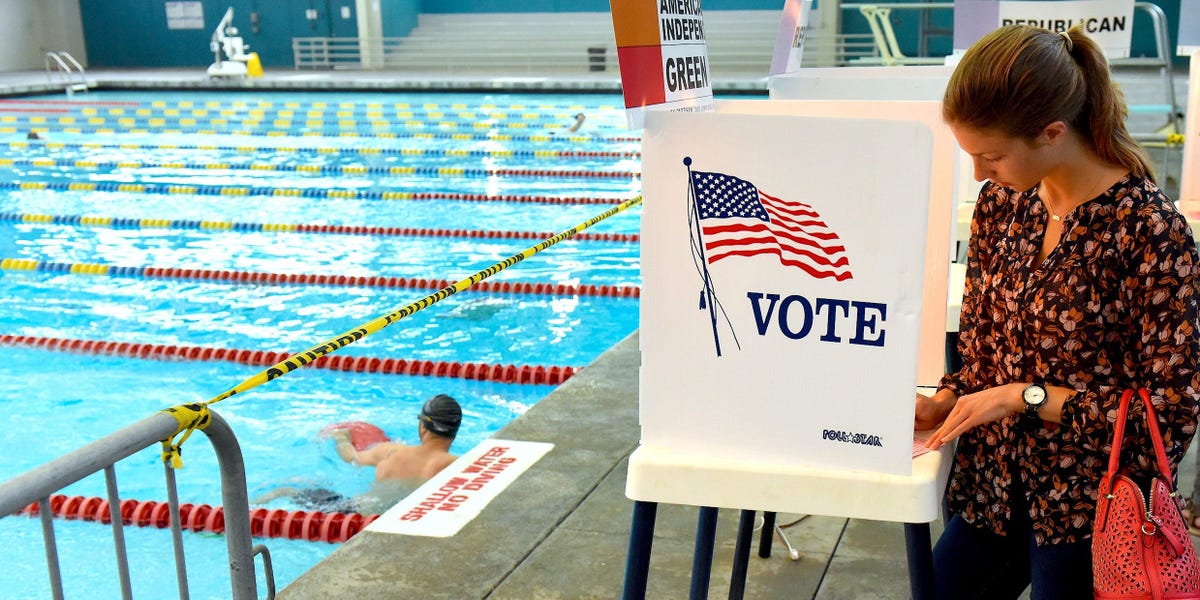 Some voters headed to the Brooklyn Museum in Brooklyn, New York, on Election Day.

The Brooklyn Museum opens its doors to voters every year. In 2020, to celebrate Americans’ right to vote, the museum displayed Ed Ruscha’s “OUR FLAG,” which it calls “a windswept, torn, and threadbare American flag that invokes the precarious nature of democracy.”

In 2022, the museum hosted an interactive neighborhood-inspired art project, according to the Brooklyn Museum website.

In 2012, surfers in wetsuits showed up at the Venice Beach lifeguard headquarters in Los Angeles.

While voting in the 2012 presidential election at Venice Beach lifeguard headquarters in Los Angeles, 30-year-old surfer Mike Weigart told the AP, “It’s awesome the polling place is where I surf.”

Voters cast their ballots in the 2016 presidential primary as swimmers completed laps in the Echo Park Deep Pool in Los Angeles.

The Echo Park pool is an indoor pool complex open year-round for activities including diving, water polo, and synchronized swimming.

In 2006, voters cast their midterm ballots at a polling place inside Visions Hair Salon in Downey, California.

According to Getty, it’s common for businesses as well as private homes in Southern California to be used as polling stations on Election Day.

Voters waited in line at a fire station in Arlington, Virginia, to vote during Super Tuesday in 2016.

Voters wait in line to cast their ballots at Fire Station 10 in Arlington, Virginia.

The Neptune Society Columbarium, built in 1898, is a historical landmark and home to 8,500 cremated human remains, many of which belong to famous names including former San Francisco Mayor Edward Robeson Taylor and the parents of Carlos Santana.

It turns into a polling place during elections.

In the 2018 midterm elections, a Harley Davidson dealership in Long Beach, California, turned into a polling place.

During midterm elections in 2018, Moises Valentin, a pastor voting at the Long Beach polling place, told Rappler, “Usually we vote in the schools or churches. Yeah, it’s unusual actually, now that I think of it.”

Levele Wiley, an employee at Los Angeles International Airport, told the site, “It’s pretty cool. I mean, it’s nice to come look at some bikes and get your vote on. In that sense, nothing seems more American than that.”

A museum-goer observed artwork as people voted in the 2016 presidential election at the Swedish American Museum in Chicago.

When the Swedish American Museum isn’t being used as a polling place, tourists often visit the Brunk Children’s Museum of Immigration, use the site’s genealogy center, or try Swedish food, according to its website.

It can no doubt get a little cramped on Election Day in this one-room schoolhouse in Colo, Iowa, in 2016.

Schools are a common location for polling places, but few are as unique as this one-room schoolhouse, which served as a polling place in the 2016 presidential election.

In previous elections, you could shop and vote at the Foodland grocery store in National City, California.

Grocery stores are normally a popular location for polls, but in 2020, the coronavirus made them less safe, leading states like Texas to opt for other polling spaces.

Ray Lounsberry has turned his farm shed near Nevada, Iowa, into a polling place for more than 15 years.

According to the Ames Tribune, each election, Ray Lounsberry — who was 93 during the 2016 presidential election — wakes up at 6 a.m. to turn on the heat in his shed and set up the voting machines. He offers the roughly 300 voters assigned to the precinct coffee and frees up space in a refrigerator for poll workers’ lunches.

Lounsberry told the outlet that he doesn’t mind sharing his shed; in fact, he volunteered it after voting at a different shed years ago that had very little heat, which he felt discouraged people from going out and voting.

“I feel like I’m doing a service to the county by letting them use this,” Lounsberry said. “I don’t mind at all.”

In 2008, voters cast their ballots next to stuffed mountain lions in the Rotary Nature Center in Oakland, California.

At Lake Merritt in Oakland, California, the Rotary Nature Center served as a polling place on November 4, 2008. The wildlife refuge is an interpretive museum that houses educational displays and exhibits, according to the Visit Oakland tourist organization.

Voters in need of a new president and a new washing machine could kill two birds with one stone on November 8, 2016, in Pennsylvania.

At Mike’s TV and Appliance store in State College, Pennsylvania, voters could be seen casting their ballot right next to brand-new washing and drying machines.