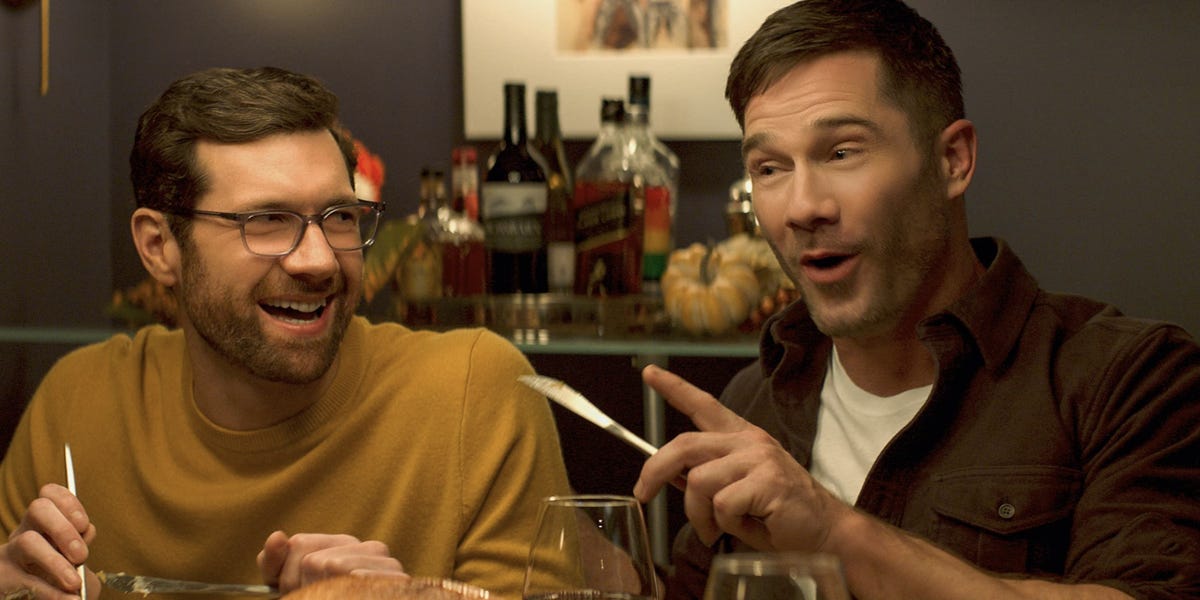 Not only did Jack (Leonardo DiCaprio) save Rose (Kate Winslet) from jumping off of the luxury steamship, but he also got her away from the uber-creepy Cal (Billy Zane).

Their romance was short but steamy so we'll continue to pretend that there really wasn't enough room for Jack on that door.

Bobby (Billy Eichner), a podcast host and self-proclaimed player, meets Aaron (Luke MacFarlane), another man known for playing the field. After a few dates, they don't really know what to make of each other but continue to spend more time together and open up about their pasts and experiences.

Bobby and Aaron's relationship can be appreciated by fans of a slower-paced romance and the friends-to-lovers trope.

Lara-Jean and Peter ("To All the Boys I've Loved Before")

When letters Lara-Jean (Lana Condor) wrote to her past crushes are mailed to each boy she's had feelings for, she wants to put a stop to the chaos immediately. In an attempt to do, she partakes in a fake relationship with Peter (Noah Centineo), one of the recipients of her letters, to make his ex-girlfriend jealous.

However, in a classic friends-to-lovers trope, the two soon develop feelings for each other and must decide if they want to make their relationship real.

From the moment that she laid eyes on him, Baby (Jennifer Grey) knew that Johnny (Patrick Swayze) was "everything."

But it was Baby's bravery that ultimately won Johnny over, and not even the formidable Dr. Houseman could keep "baby in the corner."

The story of Jack (Jake Gyllenhaal) and Ennis (Heath Ledger) is both steamy and heartbreaking.

They have to deal with a time period and community that doesn't accept their love, as well as their own notions of what their relationship really means.

Some may see the fact that Pedro (Marco Leonardi) married Tita's (Lumi Cavazos) sister, Rosaura (Yareli Arizmendi), as a dealbreaker. But we know that he did it because it was the only way that he could stay close to the one true love of his life.

If you don't believe us, read the subtitles during the prayer scene before he finally consummated his marriage.

Stella and Winston ("How Stella Got Her Groove Back")

In an attempt to find herself as a 40-year-old stockbroker, Stella (Angela Bassett) takes a trip to Jamaica. There, she meets Winston (Taye Diggs), who, despite being 20 years her junior, has an appeal Stella can't ignore.

When it's time to return to California, Stella realizes she developed real feelings for Winston and the two have to figure out if they want to make a long-distance relationship work.

Although Mia (Emma Stone) and Sebastian (Ryan Gosling) regularly break out into song and are so adorable that it hurts, their love story is one of the most authentic.

They have big dreams, go with decisions based on ineffective communication, and make mistakes so they're lucky in some ways and unlucky in others. They're the personification of that one true love that will always have a place in your heart.

Based on the eponymous novel by Kevin Kawn, Rachel (Constance Wu) accompanies her boyfriend, Nick (Henry Golding), on a trip to Singapore to attend his best friend's wedding. Soon, she discovers Nick is considered one of the country's wealthiest, most eligible bachelors and in turn, faces judgment from a fleet of socialites and Nick's mother.

Through it all, Nick and Rachel's love for each other never wavers and by the end of the movie, they're engaged.

This is a love story that spans the length of the universe.

Han Solo (Harrison Ford) and Leia Organa (Carrie Fisher) are an unlikely pair who became one of the most revered cinematic couples in history, for men and women alike. Five words: "I love you." "I know."

Ellie and Aster ("The Half of It")

A notorious jock, Paul (Daniel Diemer), asks Ellie (Leah Lewis) to help him write letters to his crush, Aster (Alexxis Lemire), whom she also desires. Keeping her true motives to herself, Ellie pours her feelings for Aster into the letters and, after a series of events including failed dates and even a marriage proposal, she eventually reveals herself as the author.

Though most of the movie focuses on Paul and Ellie's friendship, Aster and Ellie do share feelings for each other by the end of the movie.

When no one else would let Forrest (Tom Hanks) sit with them on the bus, Jenny (Robin Wright) made room for him.

Forrest would love "his girl" from that moment forward. Forrest gave Jenny a gift that would turn around her life, and she gifted him with the one thing he never thought he would have.

This love story is compelling because Monica (Sanaa Lathan) and Quincy (Omar Epps) have very similar career dreams that lead them in different directions.

Not even death can stop Sam's (Patrick Swayze) love for Molly (Demi Moore).

Luckily, they're able to reconnect through a reluctant medium, if only long enough for Sam to save Molly's life and have one last love scene behind a pottery wheel.

Albert and Armand ("The Birdcage")

When their son becomes engaged to the daughter of an ultra-conservative politician, two dads — the owner of a South Beach drag club and its star — play it "straight," even getting an estranged mother to play a role in the charade.

Though it's heartbreaking to see Albert (Nathan Lane) feeling unwanted and relegated to old "Uncle Al," Armand (Robin Williams) eventually proclaims his adoration for his life partner and the importance of being authentic to who they are, regardless of the consequences.

Olly and Maddy ("Everything, Everything")

Olly (Nick Robinson) isn't deterred that his new neighbor Maddy (Amandla Stenberg) has an illness that doesn't allow her to leave the confines of her home.

Using text messages, handwritten signs, and eventually meeting face-to-face, the two manage to have a love story for the ages.

Although you might not love the idea that Sandy (Olivia Newton-John) went from "a poor man's Sandra Dee" to full-on leather in order to impress Danny (John Travolta), he also lettered in track and "cut it down to two packs a day" to win Sandy back.

Adele and Emma ("Blue is the Warmest Color")

This film explores the toll their relationship takes on them as they mature.

Although we only got a few minutes of Carl's (Ed Asner/Jeremy Leary) and Ellie's (Elie Docter) love story, it was clear that they were soulmates.

In fact, Carl's entire adventure was inspired by his love for his sweet Ellie.

Sasha and Marcus ("Always Be My Maybe")

In this Netflix original, childhood friends Sasha (Ali Wong) and Marcus (Randall Park) have sex as teenagers and ultimately end their relationship with each other. Years later, Sasha, now a successful chef, runs into Marcus again, and the two move past feelings from their adolescent years and begin another friendship.

Despite dating other people throughout the course of the movie, Sasha and Marcus have the best chemistry and continue to support each other.

This is an epic love story that begins when they're orphaned children living on the streets in Mumbai (then Bombay).

Jamal (Dev Patel) and Latika (Frieda Pinto) are separated at a young age and must deal with seemingly insurmountable circumstances before they find their way back together again.

Few characters are as quirky, hopeful, and sad as Edward Scissorhands (Johnny Depp).

Seeing him fall in love for the first (and presumably only) time, and have that love reciprocated by Kim (Winona Ryder) gives us all the early '90s feels.

First, they hated each other, then they became friends, and then they fell in love. Harry (Billy Crystal) and Sally (Meg Ryan) proved that men and women can be both friends and lovers.

Based on her own experience marrying a non-Greek, Nia Vardalos's story about falling in love and planning a wedding is relatable in so many ways.

Toulah (Nia Vardalos) and Ian (John Corbett) come from different backgrounds, but their sense of humor and affection make them an unforgettable pair.

In a fantasy about forbidden love, Edward, a vampire, goes against his instinct and falls in love with a human. Though he does his best to avoid her at first, Bella (Kristen Stewart) sought Edward out, and once they became an item, regularly asked him to turn her into a vampire.

It was Edward who refused and then insisted she wait. It's their mutual desire and the dangers that come with being in love that has made both the books and movies huge hits.

Noah and Allie ("The Notebook")

Although the film has a definitive ending, you can read "The Wedding" by Nicholas Sparks for a continuation of their love story.

A modern-day take on Shakespeare's "The Taming of the Shrew" Julia Stiles and Heath Ledger star as Kat Stratford and Patrick Verona who attend Padua High.

Kat is anti-social and Patrick is the local bad boy who is paid to go out with her. If you were a teen in the late '90s or early 2000s, you definitely had this on DVD.

The unlikely love story of a comic book store clerk and Elvis fanatic Clarence (Christian Slater) and Alabama (Patricia Arquette), a prostitute who was hired as a gift by Clarence's boss.

The two fall in love at first sight and end up involved in a murder and an unexpected drug deal.

In this time-bending romcom, Sarah (Cristin Milioti) and Nyles (Andy Samberg) must repeat November 9 every day and soon adopt something of a romance. Through their antics, Sarah adopts a more carefree lifestyle.

Both in and out of the time loop, the two always complement each other's humor so it only makes sense they end up together.

Noah and Will ("Fire Island")

When Noah (Joel Kim Booster) and his friends go on their yearly vacation to Fire Island, they soon meet another group of men, including Will (Conrad Ricamora). In an attempt to make a memorable summer, Noah makes it his mission to find a romantic interest for his friend, Howie (Bowen Yang).

Through the process of finding someone for Howie, Noah and Will ultimately become friends and then lovers.

When Wil's (Michelle Krusiec) mother becomes pregnant out of wedlock, she takes her in and promises to help her along with her baby on the way. However, Wil's typically conservative mother doesn't know she's a lesbian and, scared to see what her reaction would be, dates her girlfriend, Vivian (Lynn Chen), in secret.

Despite Wil's hesitancy to publically proclaim her love for Vivian at first, the two support each other during life's ups and downs, proving that they're a perfect match.

Ashley and Jake ("Just My Luck")

Ashley (Lindsay Lohan) is known as the luckiest person in Manhattan until she kisses a stranger at a party, Jake (Chris Pine). Having exchanged her good luck for his misfortune, her life becomes a living nightmare and will only continue to be until she tracks him down.

Of course, the two soon fall in love but must decide which one of them needs their luck more.

When Simon (Nick Robinson), who isn't ready to come out to most of his friends and family, begins a friendship with an anonymous user online, he's determined to figure out who it is. With the help of his friends, he eventually discovers it's Bram (Keiynan Lonsdale), one of his classmates.

Though Simon's lover's identity is unknown for most of the movie, viewers can still watch the progression of a romance and its success.