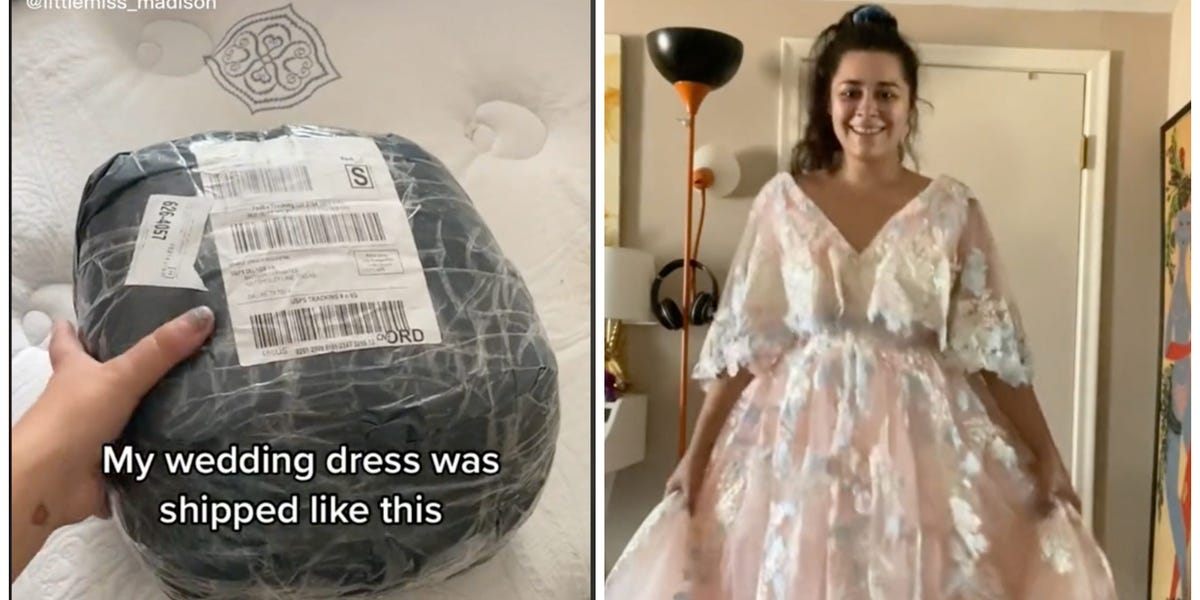 A bride-to-be in Texas delighted the internet when she revealed her multi-colored vintage wedding dress only cost $200.

The first video, shared on August 18, showed the 28-year-old attempting to open the aggressively taped package before she cut it with a Swiss Army Knife.

“I thought how cool would it be if I added some color to the dress and was as non-traditional as possible,” Cervantes told Insider.

The unveiling video gained 37 million views, and the following five videos about the dress amassed more than 14 million views. The videos also brought on a plethora of opinions from TikTok users.

Cervantes told Insider her inspiration for choosing a non-traditional wedding dress and how she responded to online trolls.

The first and only time Cervantes went wedding dress shopping was with her mom on Mother’s Day this year. However, she already had an image in her head of the wedding dress she wanted and kept a reference photo on her phone.

“Most of my wedding dress pictures that I have saved on my phone are all white except for that one pink dress,” she told Insider. “I was trying to base the style of other dresses around that one.”

Although Cervantes found one white dress she liked, it was out of her budget and ultimately wasn’t what she envisioned for her sunset-themed wedding ceremony.

Cervantes told Insider her wedding palette will consist of every color in the rainbow, “except for green.”

“I’m praying that the weather doesn’t rain, but if it is, all my guests are supposed to dress in sunset colors,” she continued. “That way, if I can’t have an actual sunset during the day, all my guests will be my sunset for me.”

She found her viral vintage dress on Luulla, and afterward, verified the online retailer’s credibility and sent in her correct measurements. She officially purchased her wedding dress on her birthday, July 18, which arrived one month later.

“I was so relieved that it was exactly what I wanted. I was beyond ecstatic to try it on,” Cervantes said. “It was a very awesome moment for me. It was a moment to myself.”

Cervantes shared six videos about her wedding dress, garnering both praise and questions from TikTok users

Cervantes told Insider that she was initially hesitant to share her wedding dress online, where her first video gained a million views after it was posted. While most comments applauded the dress – with one user calling it “gorgeous” – others weren’t as taken by it.

Cervantes saw all the comments, but she’s hoping her videos will remind others to be kind on the internet. She also hopes her non-traditional wedding dress and viral videos will encourage others to follow their instincts.

“I think people should trust their gut and not worry about what other people think,” Cervantes said. “I want people to know they can be who they are and love themselves for that.”