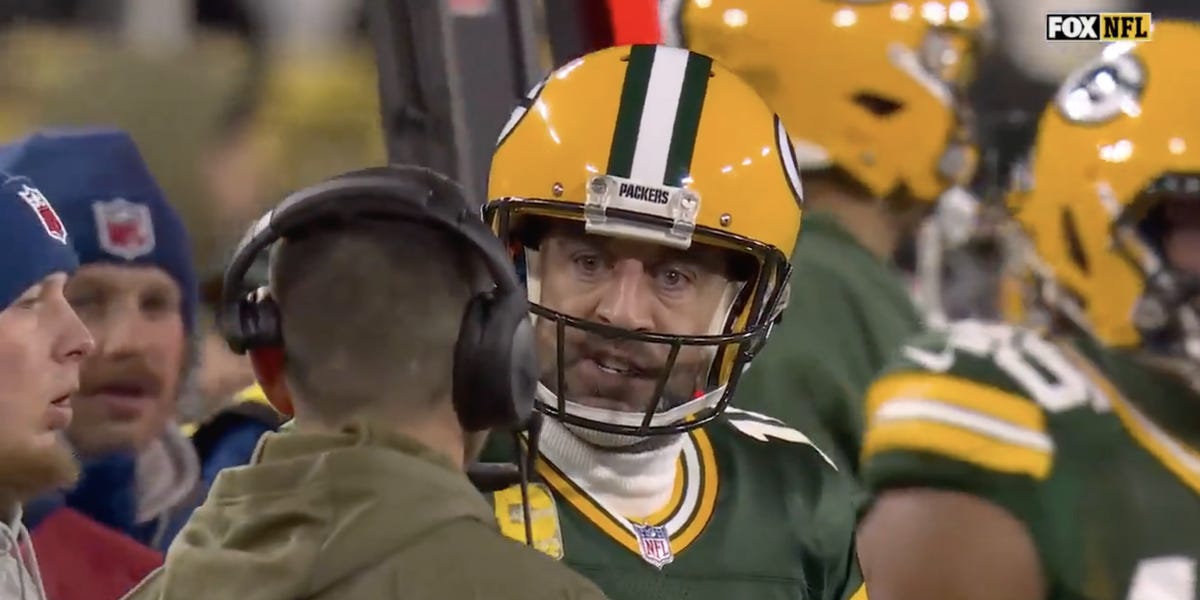 The Green Bay Packers pulled their 2022 season back from the brink with a comeback win over the Dallas Cowboys in overtime.

But as the Packers clawed their way back from a 28-14 deficit in the fourth quarter, there were some tense moments between quarterback Aaron Rodgers and head coach Matt LaFleur.

Things almost boiled over at the end of regulation. After tying the game 28-28 with two touchdowns from rookie wide receiver Christian Watson, the Packers defense was able to get a stop and earn Rodgers one final possession with just under two minutes left.

The play-calling during the sequence proved somewhat lackluster, with the Packers opting for two runs and an incomplete pass to go three-and-out and punt the ball back to Dallas just before the clock hit zero.

After the failed third down, Rodgers was fuming on the sidelines, and unleashed his anger on LaFleur. He seemed pretty clearly unhappy with the plays that were called.

After the game, Rodgers explained the reason for his frustration.

“Just every single play call, probably,” Rodgers said. “I feel like we were 30 yards from ending the game in regulation and also felt like it was two-minute, so I was going to be calling those. And I was in a pretty good rhythm.

“I wanted a chance to go win the game.

“I get run the ball on first down, but not second, and not the third down call,” Rodgers said. “I wanted to be aggressive. Let’s go get them. They play a lot of one-high man, let’s call some man-beaters, and let’s complete a couple passes and we’re going to win the game. Put it away.”

While the Packers weren’t able to put it away in regulation, they eventually prevailed in overtime, with the Packers defense getting another stop and Rodgers moving the offense into field goal range to win the game.

The overtime win snapped a five-game losing streak for Green Bay, moving the team to 4-6 on the year. While the Packers still have plenty of work to do if they hope to reach the postseason, their chances of making a run from 4-6 are leaps and bounds better than, say, starting 3-7.

The Packers now have two major tests on the horizon — a Thursday night game against the Titans followed by a trip to Philadelphia to face the undefeated Eagles. If they can win those games, their season will be back on track.

Between now and then, Rodgers and LaFleur might need to have a frank conversation about who exactly is in control of the team’s two-minute offense.