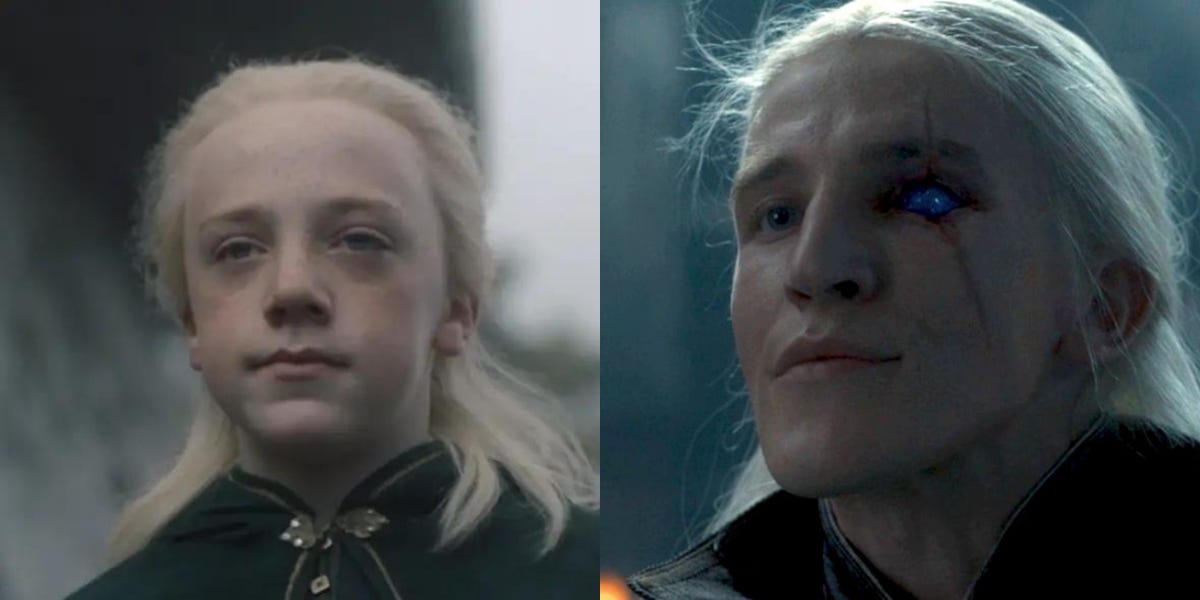 Let's start with Jace, the firstborn child of Rhaenyra and heir to the Iron Throne after his mother.

His full name is Jacaerys, though everyone calls him "Jace."

Jace was born sometime in the 10-year gap between episodes five and six of "House of the Dragon." Though Rhaenyra and her allies insist on publicly claiming that Jace is the son of Laenor Velaryon (Rhaenyra's first husband and future king-consort), his real father was Harwin Strong.

Luke was Rhaenyra's second-born son and heir to the Driftwood Throne.

Lucerys "Luke" Velaryon is another of Rhaenyra's children she had with Harwin Strong, though the realm is meant to believe he is the second son born to Laenor and Rhaenyra.

Luke was the kid who cut Aemond's eye (we'll get to Aemond and his siblings soon) in episode seven, "Driftmark." In the finale, the pair face off again with their dragons, Vhagar and Arrax. Unfortunately, this time their fight ends badly for Luke.

Joffrey is the youngest son from Rhaenyra's first marriage (and affair).

Joffrey was named after the man who was in a secret relationship with Laenor when they were both teenagers. Even though Joffrey (like Jace and Luke) was really Harwin Strong's son, his faux-father chose the name shortly after his birth in episode six.

Now onto Alicent's children, all fathered by King Viserys. Their oldest child together is Aegon II.

Aegon II (also called "Aegon the Elder" in the "Fire and Blood" book by George R.R. Martin) was the first boy born to King Viserys who survived childbirth.

Aegon the Elder is the son of Queen Alicent, and many lords in the realm of Westeros argue that he should ascend the Iron Throne after Viserys dies, surpassing the named heir: Rhaenyra. After Viserys dies in episode eight, the Green Council crowns Aegon with the conqueror's crown, before word can reach Rhaenyra.

Helaena was the first girl born to either Alicent or Rhaenyra. In between episodes, Helaena was married off to her older brother, Aegon the Elder.

Aegon and Helaena have children of their own — twins named Jaehaerys and Jaehaera.

In the ninth episode of "House of the Dragon" season one, we saw a glimpse of the blonde twins when Alicent went into Helaena's room.

Aemond was the last of his siblings to claim a dragon, though taking Vhagar for his own cost him an eye after a fight broke out among all the children in episode seven.

In episode eight, Aemond is now a confident swordsman and seemingly more capable than his older brother, Aegon the Elder. In the finale, Aemond reveals that under his eyepatch, his eye has turned bright blue, similar to the White Walkers in "Game of Thrones."

Now onto Daemon's children. He has two daughters from his first marriage to Laena Velaryon. First, we have Rhaena.

Daemon and Laena married and had their two children in the intervening 10 years between episodes five and six. By episode eight, Rhaena was happily living with Daemon and her new stepmother, Rhaenyra.

Baela is the other daughter of Daemon and Laena.

In episode eight, we see that Baela has been sent to live at Driftmark as a ward, learning the ways of the court from her grandmother (Rhaenys).

And last but not least, Daemon and Rhaenyra now have children together. Their first trueborn son is also named Aegon.

Aegon was also named after Aegon the Conqueror, adding to some confusion about which Aegon is which.

Since Aegon III is just a toddler in episode eight, with Aegon II in his 20s, the books refer to him as Aegon the Younger.

Rhaenyra and Daemon had a second boy they named Viserys.

Named for Rhaenyra's dad (and Daemon's brother) King Viserys, little Viserys II was introduced in episode eight as an infant.

Daemon and Rhaenyra were expecting a third child, but Rhaenyra experienced a stillbirth in the finale.

Rhaenyra, who was pregnant with her third child with Daemon at the start of the season finale, tragically went into early labor and delivered a stillborn daughter, named Visenya, after learning about her father's death.

For more, read our breakdown of the best details you might have missed in the season one finale.