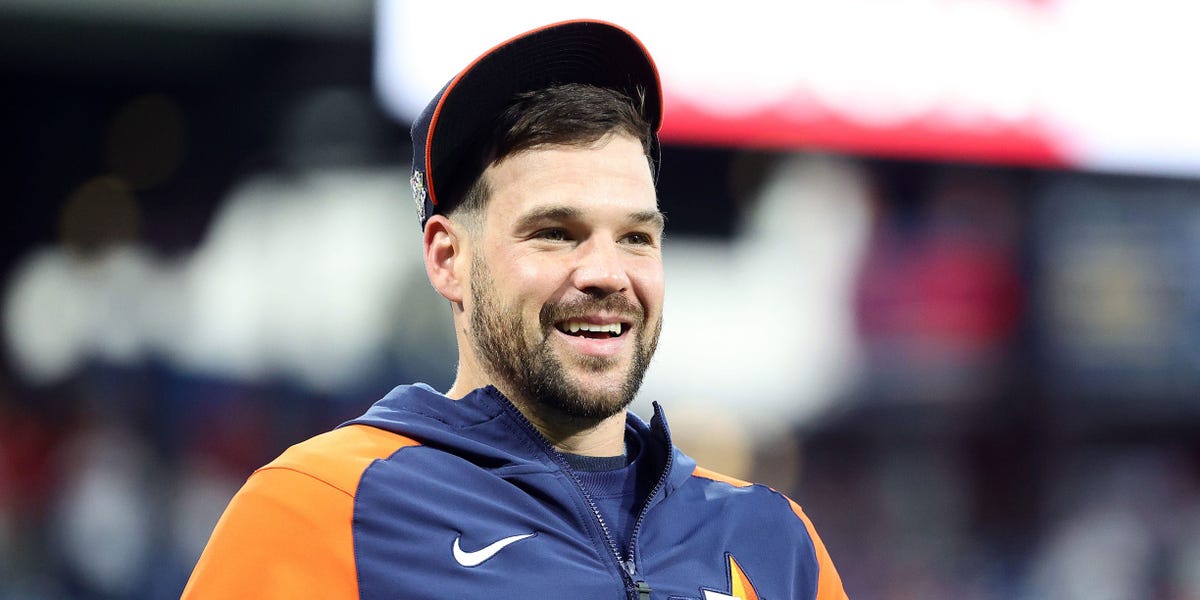 Houston Astros centerfielder Chas McCormick has emerged as one of the stars of the team’s run through the 2022 postseason.

In a lineup dotted with superstar hitters like Jose Altuve, Yordan Alvarez, and Alex Bregman, McCormick has been a bright spot in the second half of the order, leading the team in on-base percentage at .412 and batting .286 against some of the best pitching in the majors.

In Game 3 of the ALCS, McCormick hit a home run just over the right field wall to open the scoring for the Astros in the second inning, leading to a 5-0 win and a 3-0 lead in the series against the Yankees, which Houston would go on to sweep.

Celebrating in the locker room after the Astros secured their spot in the World Series, McCormick was excited — not just for what his team had accomplished, but who they would be going up against next.

“I was rooting for the Phillies, to tell you the truth,” McCormick said through sprays of champagne in the clubhouse.

McCormick grew up a Phillies fan in West Chester, Pennsylvania, a 45-minute drive outside of Philadelphia. He would now be making his first-ever MLB start back in his home town — in the World Series.

“I’m going to have a lot of friends, family, rooting against me, but I honestly couldn’t be more excited to play against [the Phillies]. They’re a great team, and it’s going to be a blast,” he said.

Ahead of Game 3, McCormick was still soaring high on the excitement of playing for a World Series in front of so many people he knew personally.

“I wanted it. I asked for it. I’m looking forward to it,” McCormick told Insider just before the start of Game 3. “I’ve got a lot of friends and family in town. It’s gonna be a fun time. It’s like a dream come true.”

McCormick does indeed have plenty of friends and family in town to watch him play, but not all of them will be cheering for him this week.

“I hope Chas does well, but I hope the Phillies win,” says Scott Fenton, an old teammate of McCormick’s at Henderson High. “It’s probably the Philly attitude, but it’s Philly or Die, obviously.”

While Games 3, 4, and 5 mark McCormick’s first time playing at Citizens Bank Park, it’s not his first time competing for a championship title in the state of Pennsylvania.

Back in 2010, McCormick was the only freshman on a team of mostly seniors. One of those seniors was McCormick’s older brother Sean, who served as starting pitcher, shortstop, and the top hitter of the Warriors’ lineup.

It might look like a lesser accomplishment now that he’s made the big leagues, but at the time, making the varsity baseball team as an undersized freshman was no easy task.

The McCormick name came with plenty of athletic pedigree at Henderson High — both Sean and oldest brother, Ryan, were star athletes at the school, each going on to play collegiate baseball. In their junior and senior years, Chas and his twin brother, Jason, both finished as the top scorers on the Warriors’ basketball team.

But heading into the 2010 season, McNichol still had yet to see Chas play in person, so he asked Sean just how real of a talent his younger brother was. His fielding was a given, but was Chas, at 15 years old, going to be able to keep up with the pitching they were going to be facing throughout the season?

McNichol recalls the memory with a laugh.

“Coach,” Sean assured McNichol, “he can hit me.”

“I remember it exactly, because we were playing an inter-scrimmage,” Sean says during Game 3 of the World Series. “I was pretty confident in myself, because I was mowing down everyone else. And then Chas comes up and just rips a first-pitch single. Smokes it into left field.

“I’m like, Okay, he got lucky that time. Next time up, I think he took me to left-center, a double. I’m like, See, this kid can play.”

“I threw him, I think a first-pitch curve ball, because I’m not giving up another hit,” Sean said with a laugh. “And he hit a double. This kid is a freshman? Yeah, well I’m a senior, and I thought I was good.”

With that assurance, little McCormick secured his spot as the only freshman playing varsity baseball that year at Henderson, starting in centerfield and batting fifth in the lineup.

Even as a freshman, McCormick’s talent was readily apparent

“It was pretty amazing. He just naturally could cover a ton of ground,” explained Fenton, another senior on the team that played both catcher and in right field next to McCormick.

“If you watch him on the Astros, he’s like, big now. He looks like a grown man, which is just so funny,” Fenton says. “But he was not that big as a freshman, maybe 5-foot-8, 5-foot-9 and just fast as hell with a rocket arm.He looked like a 13-year-old kid with 18-year-old talent.”

“You could tell he was really athletic, really smooth, really calm,” says Kyle Hooven, another of McCormick’s teammates that year. “Plus just fun. You could tell he is having fun out there.”

Chas McCormick came up clutch for the Warriors, opening the floodgates in the state championship game with a two-run double to give his team a 3-0 lead early. Henderson went on to win the game 7-0.

Still, playing alongside his older brother didn’t come without some troubles. Sean recalls one time Chas got the signal to bunt from McNichol in a playoff game while the older McCormick was standing on second base trying to get home. Chas ignored the sign and just took a strike.

“I start screaming from second base, yelling at him. ‘You get a bunt down!'” Sean says.

“Then next pitch he hits a double to the gap. I score. I was like, Oh, right, nevermind. Good job.”

In Chas’ memory, the thing that stands out about his first high school season was the talent that surrounded him.

“Just how good we were,” McCormick told Insider. “How good Sean, my brother, and Kyle were. Those two were pitching every other game, and they were dominant. They were our best hitters in the lineup. Having those two, basically, won it all.”

From high school in Pennsylvania, it was a long journey to the majors for McCormick. He played Division II college ball at Millersville University, following his oldest brother, Ryan.

Chas was selected by the Astros in 2017 in the 21st round of the draft. A fine accomplishment for any ballplayer, for sure, but it’s not often that 21st round draft picks fight their way all the way to the majors.

Even before he was an everyday starter for the Astros, McCormick had a flair for the dramatic. Fenton and Hooven both recalled traveling up to Baltimore to watch him play against the Orioles. McCormick wasn’t in the starting lineup, but entered the game as a defensive substitute in the late innings. A cheering section of McCormick fans migrated over to the left field stands to cheer him on.

As luck would have it, his spot in the order came back around, and McCormick made the most of it.

“He ropes a dead center home run,” Fenton said. “Kyle and I looked at each other, like, this guy just has a thing for the moment.”

McCormick’s place on the Astros has created some split allegiances

While his high school teammates were happy to cheer him on against the Orioles, things have changed a bit now that McCormick is up against the Phillies in the World Series.

“Chas, you know, go get your big contract. We hope you do,” says Hooven. “But no, it’s go Phillies all the way.”

But while his former teammates might have turned against him due to previously held local allegiances, McCormick’s brother and high school coach are standing behind their guy and his new team.

“This is my first time in Citizens Bank Park in Astros gear,” Sean said. “It’s a little weird. A few times, I kind of forgot. I saw Sixers players, and I was screaming at ’em, like, ‘Go Sixers!’ They’re looking at me sideways like, ‘Who’s this Houston kid yelling?'”

For McNichol, the math was simple. He wanted to see his guy get a ring.

“I would root for the Phillies if they were playing any team other than the one that Chas was playing on,” he said.

McCormick’s journey from Henderson to Houston and now back to Philadelphia came with many lessons, but the biggest one he took from McNichol was also a simple one.

“Stay out of trouble,” McCormick said with a smile.