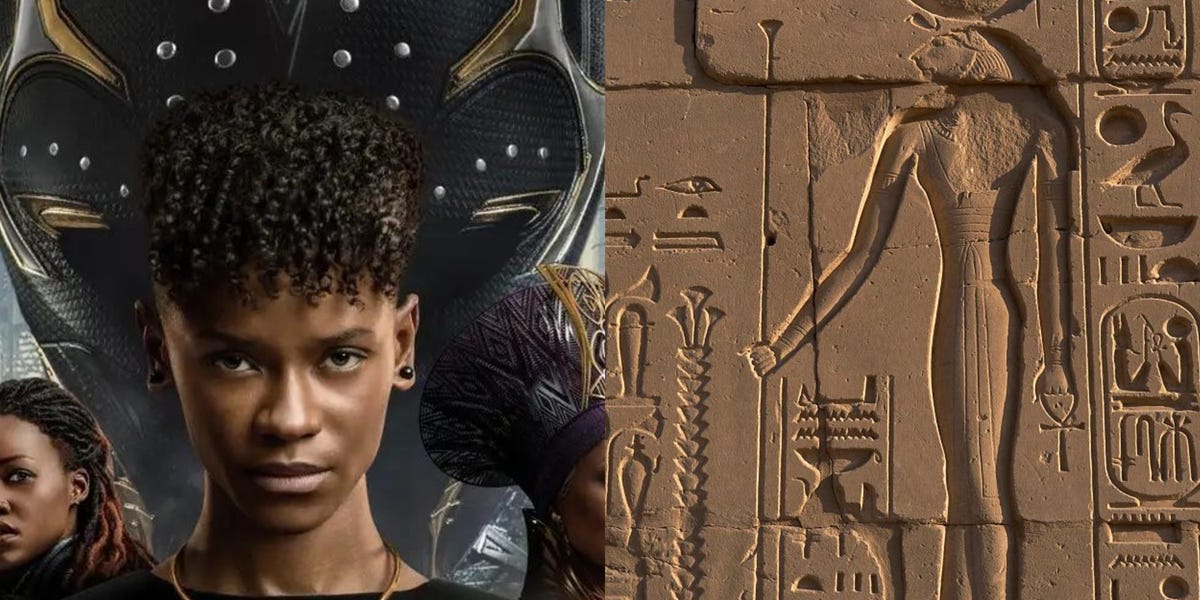 The core Pantheon of Wakanda is known as the Orisha, which refers in real life to spirits that play a key role in the Yoruba religion of West Africa and several diasporic religions. The Orisha is comprised of five gods based on ancient Egyptian and other African deities.

Both Africana religions and Afro-speculative fiction, like "Black Panther," explore "what it is to be Black and human" and their possibilities, according to Torin Alexander, professor of Africana religion at Winston-Salem State University. Religion and fiction's imaginations of what is possible for Africana people have fostered "their flourishing, their perserverance, and resilience in an anti-Black world," Alexander said.

Bast, the panther goddess, is one of the most prominent of the Orisha in the MCU. She is based on Bastet, the fierce feline goddess of ancient Egyptian religion.

Bastet was the protector of Lower Egypt, defending the king and the sun god Ra. Though she was originally depicted as a lioness in the third millennium BCE, she later took on the form of a cat. Cats were highly regarded in ancient Egypt, as they protected crops and slowed the spread of disease by killing vermin.

In Wakandan lore, Bast is represented as a panther goddess. T'Challa's ancestor Bashenga formed a religious order, the Panther cult, to guard a giant mound created by a vibranium meteor. The meteor had created demon spirits, and the Panthers fought to keep them from spreading across the kingdom.

Ptah, the Shaper, is another Egyptian deity that provides alloys like vibranium to Wakandans

Wakanda is rich in the fictional metal known as vibranium, which enabled the nation to create advanced technology and weaponry while the rest of the world was stuck in the Dark Ages. Ptah is the god that provides alloys like vibranium to Wakandans.

In Egyptian mythology, Ptah is the creator god who conceived the world and serves as a patron of craftsmen. Worshiped in Memphis, the city and capital of ancient Egypt, Ptah was typically represented as either mummified or as a man with green skin, a divine beard, and holding a scepter symbolizing power, life, and stability.

Thoth, the Egyptian god of the moon and wisdom, is the third Heliopolitan god

Thoth was the Egyptian god of the moon, knowledge, magic, and the sciences, and was depicted as an ibis bird or a baboon.

According to the original "Black Panther" comics, Thoth was among the Heliopolitans, a fictional group of gods that are heavily based on Egyptian deities. As monotheism spread around the fifth century AD, many Heliopolitans lost their worshipers, but Thoth, along with Bast and Ptah, remained worshiped among the Orisha of Wakanda.

Two African gods make up the rest of the Orisha

Kokou, a feared warrior deity from the Yoruba faith in West Africa's Benin, and Mujaji, a rain goddess of the Lodebu people of South Africa, are the two other gods that make up the Orisha of Wakanda.

In the MCU, Kokou serves as the god of war, while Mujaji is the goddess of sustenance.

The White Gorilla cult, enemies of the Panthers, worships an ape god based on a Yaounde deity

Outside of the Orisha, the gorilla god Ngi is worshiped by the Jabari tribe. After the death of King T'Chaka, the Jabari formed the cult of the sacred White Gorilla, which was considered blasphemous by fundamentalist Wakandans, according to the "Black Panther" comics. The Jabari fought to retain their faith and, led by M'Baku, eventually sought to usurp the throne, but T'Challa defeated and exiled them.

In the movie, M'Baku, originally called "Man-Ape" in the comics, was reimagined to avoid racial stereotypes.

Ngi is based on a deity of the same name, worshiped by the Fang people in Cameroon, according to Adam Amir, a professor at Florida State University. Indigenous African people considered gorillas among the most intelligent animals in the forest, and believed they were spiritually connected to them.

There are several theories around the etymology of Wakanda, some of which are tied to Indigenous spiritual practices. The Omaha and Ponca tribes, for example, believe in a Superior Being, whom they call "Wakanda."

Wakanda was also "a place of pleasure and repose, where the prudent in council, intrepid and courageous warriors, indefatigable hunters, and the kind man will obtain an eternal recompense," according to a 1873 report in the Nashville Tennessean cited by the Washington Post.

While it is unclear if Stan Lee and Jack Kirby, the writer-artist duo behind "Black Panther," directly consulted Native American history when the superhero first appeared in Marvel comics in 1966, the 20th century was marked by policies that led to the displacement of Indigenous people, including the Indian Relocation Act of 1956 and the removal of Native American children from their tribal families.

Other associations with the name "Wakanda" include the Kenyan Kamba ethnic group, also called Akambda or Wakambda, as well as "Kanda," the Kikongo word for "family" or "clan."