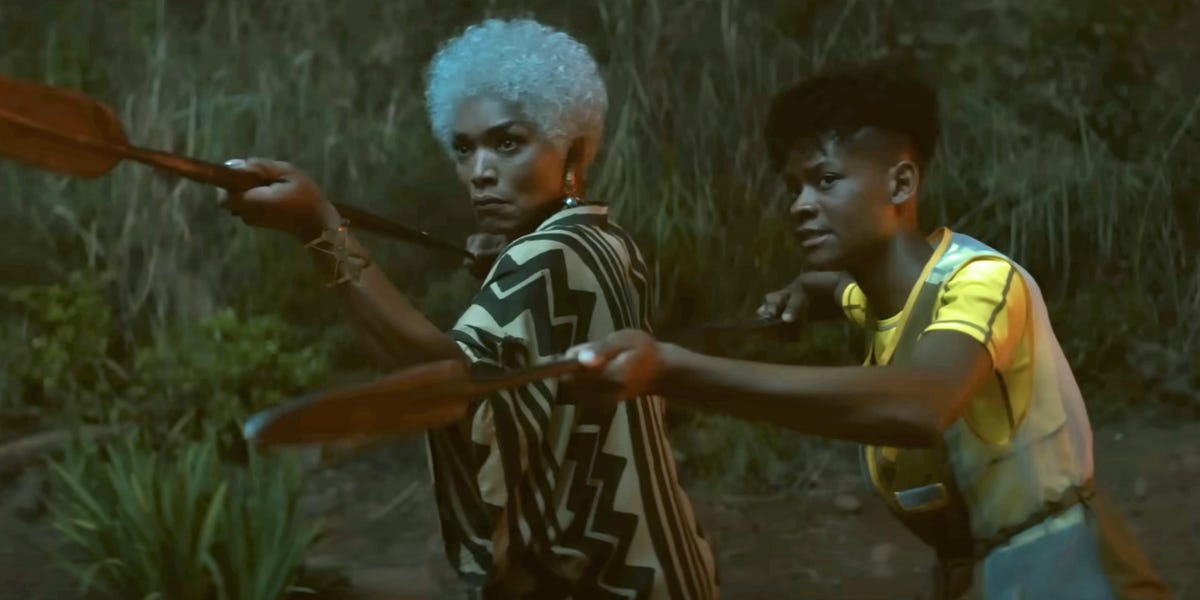 While the news of Prince T’Challa — who goes by the alias “Toussaint” in order to live a normal life in Haiti — may have come as a surprise, the character’s reveal was hinted at during a few moments in the “Black Panther” sequel.

In fact, the end-credits scene isn’t even Touissant’s first appearance in the film. He actually appears earlier in the movie during a scene that becomes a bit more emotional upon a second viewing.

Here’s where to keep an eye out while watching “Wakanda Forever.”

1. Queen Ramonda was likely trying to tell Shuri about her nephew early in the movie.

During a second watch, it becomes clear that both Ramonda and Nakia were trying to find the right time to introduce Shuri to her nephew.

Early in the film, Queen Ramonda tells Shuri: “There’s something I need to tell you about your brother.”

Before she can say anything else, Ramonda’s cut off by Namor’s entrance and the mother and daughter never return to their discussion. You may leave the theater wondering what Ramonda was going to tell Shuri.

When you watch the movie again, it becomes clear that Ramonda was likely trying to tell Shuri about T’Challa’s secret son with Nakia.

Nakia was likely attempting to break the news to Shuri, as well. Early in the film, we learn she has been trying to reach out to Shuri numerous times to no avail. Shuri repeatedly refuses her calls.

2. Touissant appears earlier in the movie

When Queen Ramonda first arrives in Haiti to speak with Nakia, she’s approached by a group of schoolchildren.

Look closely. Touissant is the little boy who approaches Ramonda first to bring her to his mom.

He even has a line, asking Queen Ramonda cleverly if she’s there to see the headmistress, instead of referring to Nakia as his mother, in order to keep their relationship hidden.

Since Queen Ramonda dies earlier in the movie, you initially leave the film thinking that it’s unfortunate the two were never shown on screen together. When you realize the movie showed their relationship in a subtle way, it makes that small moment between grandmother and grandson even more emotional on a second watch.

“Wakanda Forever” is now in theaters. You can read our review here.