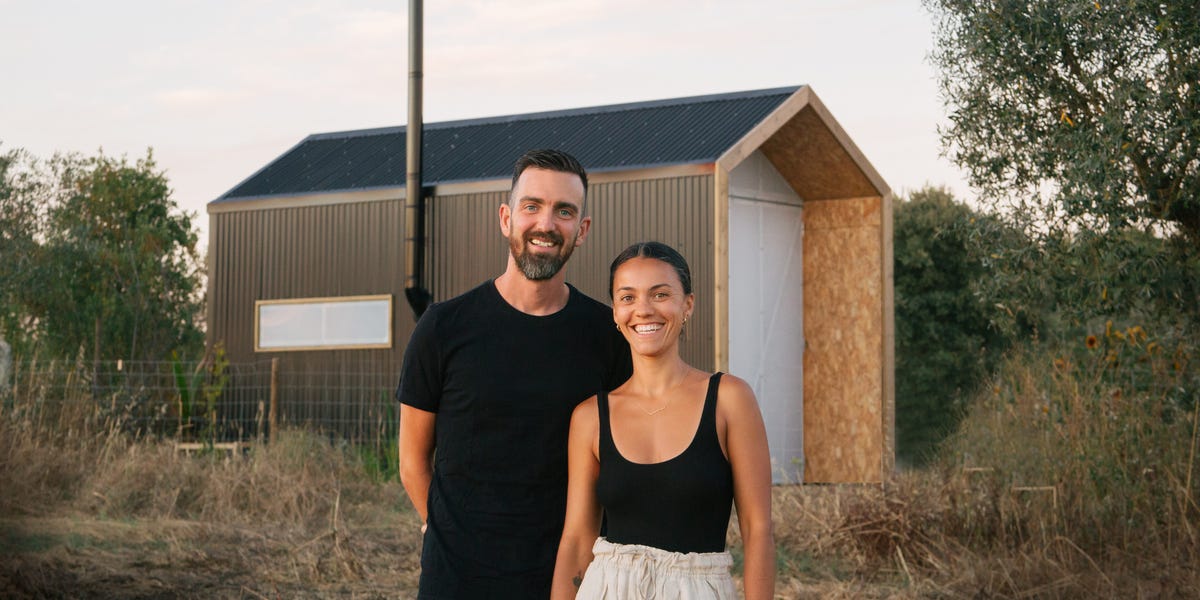 Pepe Romero and Eugenia Diaz, both 35, know a thing or two about making dramatic lifestyle changes.

The couple moved from Spain to Los Angeles in 2012 after finishing university, Romero told Insider. Diaz had a background in medicine, but she pivoted into starting a handbag brand in 2014. As the brand grew, Romero left his job at an architectural firm to help manage the business.

Five years later, in 2019, the couple decided to shut it down because they wanted to change their lifestyle.

“We built a camper van and traveled around Europe for a few months when the idea of building our own house came to mind,” Romero said.

Part of the decision was inspired by their experience of transforming the camper van, Romero said.

“When we bought our empty, second-hand cargo van, all the quotes we received to transform it into a camper van were very high. We could not afford it,” Romero said. “We were forced to build it ourselves and after that, we realized that anything can be done if you try hard and study it.”

When they wrapped up the van conversion, they realized how much they enjoyed working with their hands, and decided to bring that same ethos to a new project: building a tiny cabin.

“When it came to building a house, hiring someone to do it was not what we wanted as we had already tasted what it felt like to do things by ourselves,” Romero said.

That’s how the couple came to build a tiny cabin in the countryside in Alentejo, Portugal. The cabin is tucked away in a small town of around 30 people, most of whom are elderly folk who have lived here their whole life, he added. The cabin sits on the side of a private dirt road that leads to the land of a next-door neighbor.

“I have many years of experience in architecture design, and Eugenia is a designer by trade, but none of us actually built anything until we built our van,” he added.

Originally, the couple had been on the hunt for a run-down home they could renovate on their own.

“Renovating an existing structure felt like something that was easier to do and more achievable, but all the ruins that we came across were not what we were looking for,” Romero said.

Many of the buildings they found were illegal and poorly taken care of, he said.

“After a few months, I said to Eugenia that maybe we could search for an empty piece of land, so we could design and build what we wanted from scratch,” Romero said. “We found our property in a couple of weeks, signed the agreement, and moved with our camper van to live on it.”

The plot that Romero and Diaz bought measures almost 1.2 acres, but the cabin occupies only a small portion of the land.

The couple wanted to lower their cost of living by being self-sufficient, Romero said: “For that to happen, we needed to grow our own food, so land size was kind of important.”

The space also meant that they weren’t too close to their neighbors, giving them the privacy that they wanted, he said.

“After these first couple of years living off the land, we realized we didn’t need that much space to grow our food,” he added.

The couple declined to share how much they paid for the land.

The couple drew up the design plans and built the entire cabin on their own, with barely any external help.

Romero said the first few days were the toughest.

“I remember thinking to myself when we first started building the platform, ‘Did we just bite more than what we can chew?'” he said.

Thankfully, they became friends with the previous owners of the land, who were kind enough to assist them.

“Having them around those first days helped a lot,” Romero said. “It was great and a huge push, as those early days were the most complicated ones.”

The couple started building the tiny cabin in December 2020 and lived out of their van in the early days of the build.

The weather was a challenge of its own.

“December had the rainiest winter that our neighbors in this area could remember,” Romero said. “It was cold, humid, and muddy.”

There was barely any electricity, as the couple only had 350 watts of solar panels installed on the roof of the van.

With less sunlight during the winter, the solar panels were not enough to get them through the whole day, he added: “We would need to charge the battery of our power tools every time the sun got out.”

Romero and Diaz ended up moving into cabin in January 2021, even before it was completed.

Although the van was good for traveling, it wasn’t the most comfortable to live in during the cold, Romero said.

“I think we only had half of the front door installed and no windows, but we taped the openings with plastic and started living in it anyway,” he said. “We were definitely way out of our comfort zone.”

The completed cabin has a rectangular layout, with a sleeping area in the loft that can be accessed with a ladder.

Although it’s tiny, the cabin fits everything they need — including a living space, sleeping area, kitchenette, and toilet, Romero said.

“Although I like to think that we can achieve anything we set our mind to, I was scared because we didn’t know if it was going to come out ok,” Romero said.

For him, the most memorable part of the build was when they were done installing the cabin’s black facade.

After getting back from a walk with their husky, Aspen, on that same day, Romero saw just how good the cabin looked for the first time.

“Knowing that we did that, with our own hands, was extremely rewarding. I will carry that feeling with me forever,” he said.

For Diaz, the biggest challenge was adding the finishing touches to the cabin.

“The finishing touches are what take the longest,” Diaz told Insider. “We were already living in the cabin and it made our progress even slower. The last 20% of the build took us 80% of the time.”

Due to the limited space, the couple kept to a minimalist design and tried to incorporate space-saving furniture wherever they could.

The couple opted for a retractable wooden dining surface that can be kept in the wall and pulled out only when required, Romero said.

Although they have a compost toilet in the cabin, Romero and Diaz use an outdoor shower.

The cabin is connected to the water grid, but the couple plans to collect rainwater and store it in tanks in the future, Romero said.

“We also have plans to build a well, as our area has a lot of underground water,” he added.

The two of them are now 90% self-sufficient, as they grow most of their food in their garden.

“I wanted to have a garden for a long time, so being able to grow my own food and see the progress in the garden was very rewarding,” Diaz said.

They don’t eat meat often but when they do, it’s usually from a farm nearby, Romero said.

Sometimes their neighbors, who raise chickens, will also pop by to offer them fresh poultry, he added.

Since they’ve started sharing their journey online, the couple has received messages from followers asking for advice on how to build something similar, Romero said.

Those questions became their next business venture: The couple is selling a guide on how to build a cabin.

“We decided to write this guide to help others replicate our design,” Romero said. “All our knowledge and research for every step of the build is in that guide, where we explain step by step in words, pictures, and drawings, what we did, how we did it, and why we did it.”

The book includes a complete materials list, alongside recommendations about the parts of the cabin that they would have done differently, Romero said.

The 130-page guidebook is available on their website for €399, or $390. The couple has sold more than 600 copies of the guide so far, according to a screen grab of their store dashboard that Insider viewed.

The couple has since constructed a workshop next to the cabin and is planning to build another house on the land.

“We are going to start building our final home now, and it is going to be a major project,” Romero said. “I feel that everything we did until this point was to prepare us for this. It is going to be the project of our lives.”