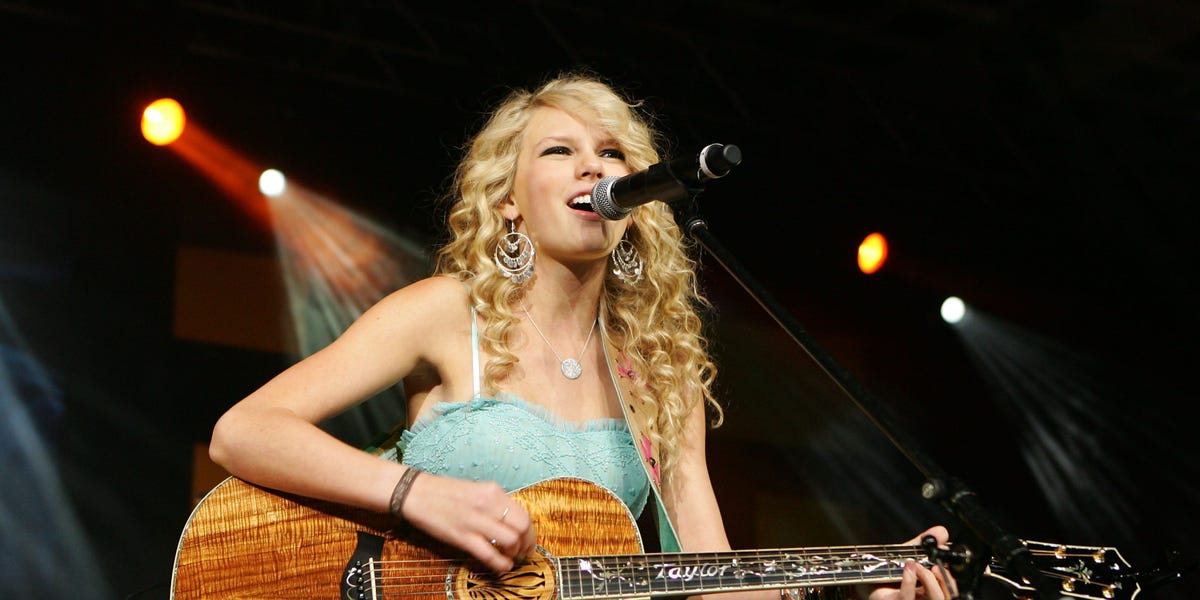 “You’re on the phone with your girlfriend, she’s upset,” is the opening message 18-year-old Katharina sent a man she matched with on Tinder.

“So confused right now,” he replied after she sent a series of cryptic messages referencing his presumably non-existent girlfriend, before landing on what was going on — Katharina’s messages are the lyrics of Taylor Swift’s 2008 hit song “You Belong With Me.”

Katharina, who requested we withhold her last name due to privacy concerns, posted screenshots of their conversation on TikTok, where it blew up, receiving over 5.4 million views.

While using Swift’s songs as an opening gambit in online dating isn’t new, TikTokers began resurfacing the trend in the run-up to the release of Swift’s 10th studio album “Midnights” on October 21.

Many of the “You Belong With Me” exchanges have been uploaded in recent months along with a sped-up version of the song, with videos often receiving over a million views.

But the TikTokers aren’t just hoping to go viral — for some the trend offers a fun way to find someone they think they could be truly romantically compatible with.

Ten days after her original video, Katharina posted a follow-up where she tried the same thing with another match. She told Insider it didn’t lead to any dates, but “it’s definitely a good way to find out whether the people are actually nice.”

Katharina said she thought the Swift-inspired meet-cute would be “funnier than just saying ‘we met on Tinder.'”

Commenters agreed. “This is actually cute af are you in love now lol cause I would be,” read one top comment on her original video, which has over 900 likes. Another with over 1,300 likes read, “Maybe is the one!! It could be a fun story one day at your wedding!”

Twenty-five-year-old Jordan Fisher, who goes by the TikTok handle jordanrose.f, recently posted a video of herself sending lyrics from one of Swift’s new songs, “Question,” to a Tinder match. He didn’t appear to realize he was receiving song lyrics, and the video ended with Fisher writing, “So you’re not a swiftie” and appearing to un-match him.

Fisher told Insider she initially decided to take part in the trend because the lyrics seemed like a good icebreaker for matches that she did not know how to start a conversation with.

Fisher isn’t the only TikToker who appears to be using the trend as a litmus test for potential dates, and many commenters who judge the men’s responses say their failure to play along is a “red flag” or gives them “the ick.”

Fisher said that part of the appeal is that the trend allows men to express how they feel about Swift, which can be illuminating.

In recent years, many people have argued that the historical dislike for and dismissal of Swift is rooted in misogyny. Swift herself appeared to address the double standards she believes she has been subjected to in her 2019 song “The Man,” which includes the lyrics, “I’m so sick of running as fast as I can / Wondering if I’d get there quicker If I was a man / And I’m so sick of them coming at me again / ‘Cause if I was a man / Then I’d be the man.”

“I would never expect someone to love her music, but if they deeply hated her I would question if that is something that is rooted in something else like misogyny,” Fisher said, adding, “It isn’t always that deep, but most people don’t hate artists for no reason. It’s one thing to not like their music but it’s another to hate them as a person.”

It seems men are beginning to catch on to the trend.

On October 28, Nikita Van Thurenhout, who goes by the TikTok username nikitavanthurenhout, posted a video to the same song. Her match played along until eventually replying with: “You really like Taylor Swift huh?? Is that for TikTok?”

Nikita responded, “Ahahaha I thought you didn’t notice damn,” to which he replied, “I was giving you the content.”