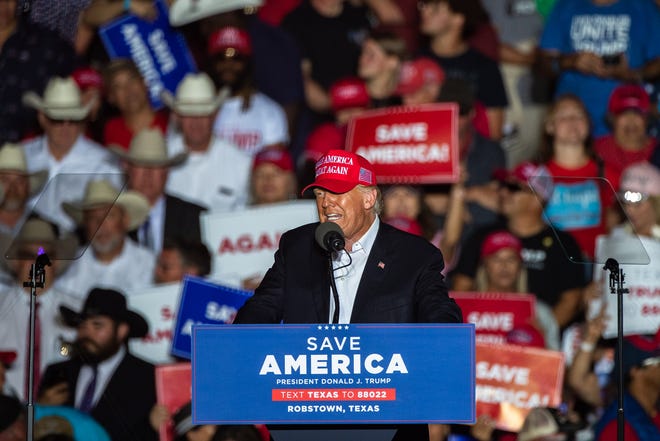 ROBSTOWN — Raquel Garcia was making breakfast when she heard the news.

“It came on the radio playing while I was in the kitchen. I didn’t believe it,” said Garcia, 61. She said she immediately started making calls to inform others: Former President Donald Trump was coming to South Texas.

“Robstown? Really?” her husband, Adolfo Garcia, recalled saying. The couple lives in Alice, but he was in California at the time for his work as a truck driver. Luckily, he would be back home in time to go to the Saturday event.

“It’s like it was meant to be,” he said as they waited near the entrance of the outdoor arena at the Richard M. Borchard Regional Fairgrounds.

The Garcias, who supported Trump for both of his presidential runs and live about 30 miles from the fairgrounds, were among thousands of people who traveled to see the former president speak at the climax of the day-long event.

The venue was likely a calculated choice, as Republicans are hoping to rouse turnout in key South Texas races while also staving off Democratic challengers in tightening statewide races. Event organizers declined to disclose admission totals. The fairgrounds’ 35,000-square-foot central pavilion arena, which was packed full during Trump’s speech, can seat up to 1,900 in the bleachers and up to 1,000 floor seats.

And no fanfare was spared. With heroic music playing from the stage’s sound system, Trump debuted his new plane — called “Trump Force One” — during a fly-over above the fairgrounds before landing at the Corpus Christi International Airport. The spectacle drew roaring applause from supporters.

“This Nov. 8, the MAGA movement is going to deliver another Texas-sized landslide,” Trump said to an overflowing crowd of people.

The rally came two days before early voting was to start for the November election. It also came a day after the U.S. House committee investigating Jan. 6 officially subpoenaed Trump — a development Trump condemned as a “witch hunt.”

For an hour and 47 minutes, Trump discussed a variety of topics while lodging criticism of the Biden administration, calling up guests to adlib on stage and announcing a flurry of endorsements for state and local races. Notably, Trump announced his endorsement of Connie Scott, a former Texas representative running to unseat Nueces County Judge Barbara Canales, the incumbent Democrat.

Throughout the event, he repeatedly reiterated his false claims of widespread election fraud. He also unleashed attacks against a number of Democratic candidates competing for statewide offices in Texas. Democrat Beto O’Rourke, who is running to unseat Gov. Greg Abbott, was a frequent target of Trump.

Trump, in one of the highest points of the night, hinted he could run for president again in 2024, but said he would not formally announce a run before the midterms.

“In order to make our country successful, safe and glorious again, I will probably have to do it again,” Trump said, drawing applause and chants of “USA.” “But first, we have to win a historic victory for the Republican Party this November.”

While Trump has broadly hinted he could run again, his remark in Robstown is possibly the strongest indication of his intention to run. Whether President Joe Biden will run for reelection also remains to be seen.

Tina Lardner, 69, of Corpus Christi was in the crowd. She said the prospect of casting a vote for Trump — which she said would be her first time going to the polls in her lifetime — was appealing.

“I think it’s the best thing that can happen,” she said.

However, not everyone felt that way.

The Nueces County Democratic Party helped organize a counter-protest near a key intersection that leads into the fairgrounds. There, nearly 30 people held signs in support of Democratic candidates or in opposition to Trump. Nueces party Chair Rene Saenz said the local party’s effort was important to “show all sides” to passersby.

“(Trump) tried to destroy democracy and we want people to recognize that’s not a joke,” Saenz said in an interview. “It was something that has never happened before. We want to have that presence here because his presence is for 2024.”

For others, the event being in Robstown was the culmination of a gradual shift in South Texas’ politics.

Bianca Garcia, a Robstown native and the president of the Latinos for Trump Association, recalled when she was tapped as the Trump campaign’s Latino engagement director for Texas in 2016. At the time, she said, the campaign was starting from scratch and worried it would face apprehension from South Texans as a result of Trump’s anti-immigration rhetoric.

The GOP’s newfound focus on South Texas shows her work had an impact, she said.

“We planted seeds, watered them and watched them grow,” she said in an interview.

At least two U.S. congressional districts are considered to be in play: the 34th District in the Rio Grande Valley and the newly redrawn 15th District, which runs from McAllen to the suburbs of San Antonio. The Republican candidates for those races, Mayra Flores and Monica De La Cruz, did not attend the rally, and instead recorded short video messages that were played to the crowd.

Multiple speakers joined Trump during the rally, including Texas Lt. Gov. Dan Patrick, Attorney General Ken Paxton and U.S. Rep Michael Cloud, R-Victoria. Abbott, who is seeking a third term in the November election, said this week that he would not be in attendance because he would be at a campaign event in Florida.

There are some indications that Trump’s popularity has wavered since 2020. A poll from the University of Texas at Austin Texas Politics Project, released on Thursday, found that 44% viewed former Trump favorably, while 47% viewed him unfavorably.

Still, Trump remains popular with the GOP base, and many candidates sought his endorsement during the primaries. The UT Austin poll also found that 82% of Texas Republicans held a favorable view of the former president and only 9% held an unfavorable one.

More:Will Republicans be able to break the Democrats’ lock on the Hispanic vote in Texas?