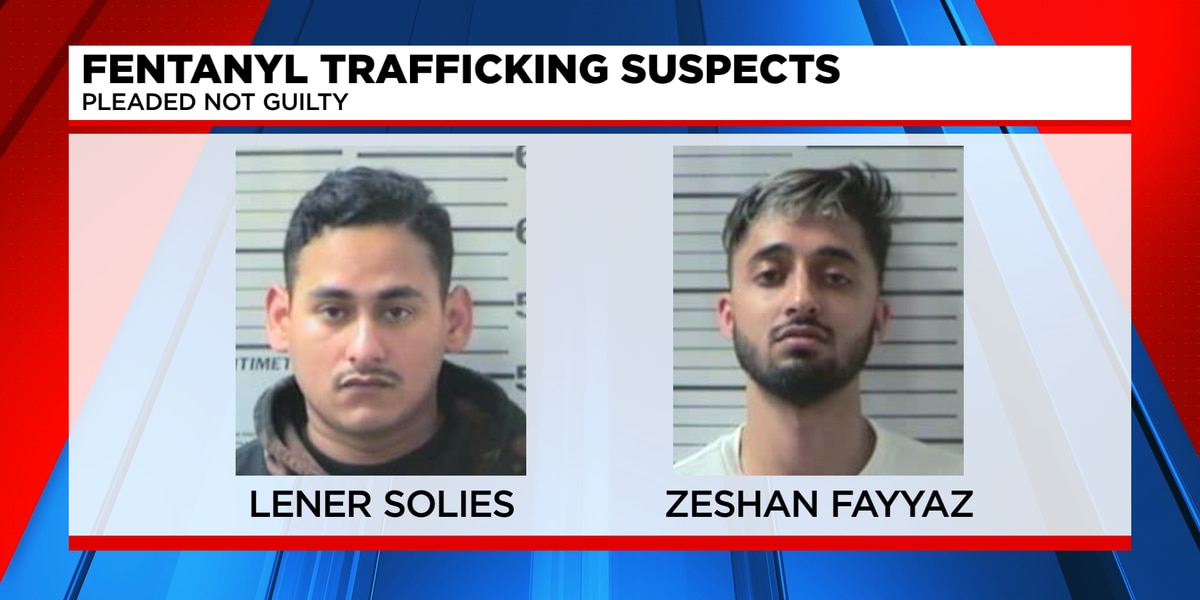 MOBILE, Ala. (WALA) – A pair of California men on Wednesday pleaded not guilty to drug trafficking and possession charges related to what authorities say was the largest fentanyl bust in Mobile County’s history.

Lener Daneski Jiron Solies, 27, of Norwalk, Calif., and Zeshan Malik Fayyaz, 26, of Hawthorne, Calif., appeared remotely via video hookup from Mobile County Metro Jail. Mobile County District Judge George Zoghby left in place bonds of $1.5 million each. The order requires those bonds to be paid in cash, a condition that the defendants’ lawyers said is tantamount to denying bail.

“Fentanyl is presenting us with a complete paradigm shift,” Blackwood told the judge, later adding, “As bad as cocaine is, as bad as meth is, as bad as heroin is, fentanyl is a game-changer. People are dying from it every day.”

The arrest occurred on Oct. 8, hours after the Mobile County Sheriff’s Office announced an unrelated fentanyl bust at the Dreamland Skate Center in Tillman’s Corner.

According to authorities, Solies was driving a rental car when deputies pulled the vehicle over on Interstate 10 near the Dauphin Island Parkway exit for an expired tag. Blackwood said a drug-sniffing dog alerted to the presence of narcotics and that a subsequent searched turned up the fentanyl, along with 3 grams of cocaine.

Blackwood said Solies did not have a driver’s license. He said the defendants later told investigators that they were driving from the Los Angeles area to Pensacola.

Blackwood argued for maintaining the initial bonds set by Mobile County District Judge Spiro Cheriogotis. He said the defendants have no ties to Mobile County and face, based on the volume of fentanyl, a mandatory sentence of life in prison if convicted. He also reiterated how deadly the drug is.

“That’s why it is so dangerous,” he said. “That’s why every aspect of the criminal justice system must take fentanyl prosecutions seriously.”

Chase Dearman, an attorney for Solies, objected to Blackwood’s characterization of how many people the drugs would kill.

“There is no chart that I’m aware of that’s been accepted in a court of law that converts a certain weight of a certain substance to a number of deaths,” he said.

Dearman acknowledged that fentanyl is a dangerous drug but added, “All drugs are dangerous. All of them are.”

Dearman said that although his client is accused of transporting drugs, no one has alleged that he is a drug dealer.

“My client is not guilty,” he said outside the courtroom. “He’s not admitting to anything at this time. Period.”

Stewart Hanley, an attorney for Fayyaz, said his client is the son of immigrants with no criminal record and a consistent work history. He noted that the defendant’s parents were in court Wednesday and argued that a $75,000 bond with electronic monitoring and other conditions would be more appropriate.

A woman identifying herself as the defendant’s sister said, “We would take full responsibility.”

Dearman told the judge that he intends to wait until after the preliminary hearing to revisit bond, but he said after the hearing that $250,000 would be fair. He noted that the current $1.5 million is equivalent to the maximum bond amount set by the Alabama Supreme Court in murder cases.

“My client didn’t murder anybody,” he said. “And at this stage of the game, the law simply states he’s presumed innocent, and he should be entitled to a reasonable bond. There is no way he can afford a $1.5 million cash bond. Very few people can.”

Download the FOX10 Weather App. Get life-saving severe weather warnings and alerts for your location no matter where you are. Available free in the Apple App Store and the Google Play Store.