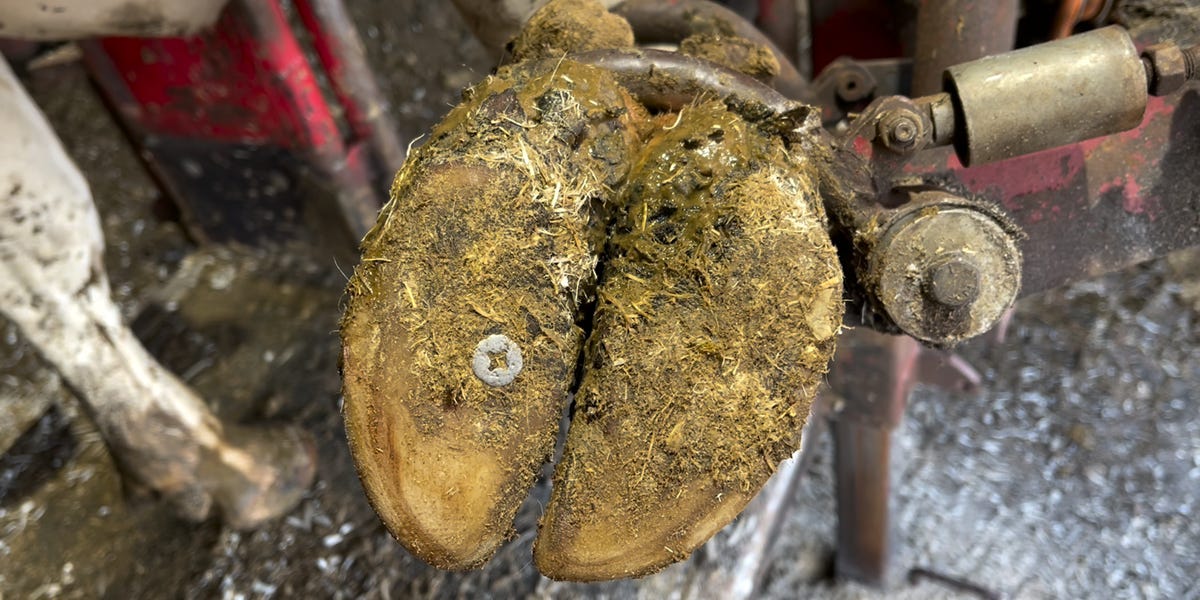 Following is a transcript of the video.

– My name is Nate Ranallo, and I am a hoof trimmer. I’m going to show you how I remove rocks and screws from cows’ feet. I trim primarily dairy cows.

On a typical day, I’ll trim anywhere from 40 to 50 cows. So you’re talking 160 to 200 feet, depending on the day and the number of cows that the farmer has to trim that day.

The chute that we put the cow in is used to keep her in one place, basically, so she’s not walking around. Helps us to lift the feet up safely and work on them without her moving them. She can still move, but it just gives us a safer working environment to run our grinders and our knives. We’re dealing with really sharp tools, and so we want to try to keep that foot as motionless as possible while we work on it.

So, what we’re looking at here is a cow that has stepped on a screw. And at this point, I’m not really sure how deep this screw is embedded. So that’s what I kind of have to investigate. Is there pain here? Is this a long screw that’s all the way through that hoof capsule and into the corium, or is it just a surface problem?

For the basic anatomy of the cow’s hoof, you’ve got the outer structure, which is what everyone sees. That’s the hoof capsule, the hard part that they walk on. But right underneath that is a layer called the corium, on the sole of the foot. And that’s what produces the sole of the foot, the very bottom of the foot. What I’m trying to do is actually to trim the foot and get the angles in the foot back to their normal state. That’s what makes them comfortable. So, just like in people, if we wear uncomfortable shoes that have flat soles, you can feel that in your feet. Almost immediately, you can feel that discomfort. Same thing with a cow.

So, when I find something like this, the first thing that I do is I try to remove the debris from around it. And I’m using my hoof knife here. And what I’m doing is trying to get ahold of that screw and trying to see if it’s an entire screw, how firmly embedded it is in the foot, and if I can actually remove it with the hook of my hoof knife.

So, at this point, I’m going to use pliers to pull this screw out. And the reason I did that is it was too firmly embedded to remove with my hoof knife. I don’t want to apply downward pressure, because at this point, I’m not sure if this is punctured through. And you can see it’s about three-quarters of an inch left of this screw. It’s a fairly sizable screw. Definitely something that would cause damage if it had gone all the way through. I don’t think it has, based on what’s left. The only thing would be is if there was some left inside that foot, and that we’ll have figure out as we keep going here.

So, what I use to trim the cow’s hoof is actually a 4½-inch angle grinder, and it’s got a specifically designed cutting head on it that shaves away the hoof as I trim. So what I’m doing here is just reducing this hoof down, creating the natural foot angles that she needs. Obviously, you can’t do as much finesse work with a grinder as you can with a knife. So anything that takes a lot of finesse or where you have to be real careful about touching things, that’s when I’m going to use the knife, ’cause I can be much more accurate with it. As far as creating a uniform sole, I can do a better job with this grinder than I can with a knife.

One of the most common questions I get is, “Does this process hurt the cow?” And trimming hooves is just like us trimming our fingernails. There’s no pain in the nail whatsoever, no pain in the hoof. It’s the internal structures of the foot that have feeling, and we try to avoid those when we’re trimming as much as possible. Cows’ hooves are very similar in makeup as human fingernails, made of keratin. The only difference is, is they walk on those. The outer hoof layer doesn’t have any feeling, so I can clean up that pretty safely without causing any discomfort. It’s the inner structures of the foot that I’m concerned about, where that screw may have poked through to. That’s where it would be sensitive. And when I get to those points, that’s where I’m much more hesitant, as far as using my knife.

That black dot that you see is a telltale sign of a puncture from something metal. And basically, what you’re looking at there is, what I believe, anyway, to be oxidation from the steel in the screw itself. And this is common when you see a puncture from a nail or a screw like this. You’ll have a nice perfect circle right around where that puncture was. So I’m going to continue to track down this black spot, all the way until it disappears or until I get to corium. If it gets to that corium layer, I know there’s likely going to be an infection that we’ll have to deal with. However, I’m just going to keep working, slowly removing layers of this to make sure that there is no problem.

Basically, I know that this hoof layer is going to be about a half of an inch thick, so I can tell how deep I’m going and how much further I have to go based on that. And the consistency will also change. It’ll get softer. So I’ll be able to tell when I’m getting close to that that corium layer. But luckily for this girl, the screw did not puncture all the way through to the corium. So this was just caught in her sole.

So, picking up this cow’s foot, I can see there’s a hole there. And when I’m working with my hoof knife, I can feel individual stones in this hole. What happens is, is cows, when they go from the outside environment to up onto concrete, those rocks can get embedded into that sole. And over time, they can actually work their way all the way through and puncture as well. She is showing signs of discomfort with this foot. So that’s what I suspect has happened when I discover all these rocks in here.

There’s no real good way to get the stones out without just simply picking them out with my hoof knife. So that’s what I’m doing here. I’m scraping away, trying to pull out as many of these rocks as I can before I start to work on them.

You might think that larger stones would be a bigger problem, but in actuality, it’s the smaller stones that have the ability to embed in the foot. You may get a larger stone embedded in the very surface of a sole, but it’s hard to drive a large stone through the sole itself. It’s these smaller stones that have the opportunity to find small cracks in the white line and in that sole and be able to puncture through to the corium.

You have to realize that a cow weighs anywhere from 1,200 pounds, 1,000 pounds, let’s say, 1,000 pounds up to 1,600 pounds. So you’re looking at 250 to 400 pounds per foot. So if you have some stones, some small rocks in that and they step onto concrete, you can see how that would penetrate and drive right into that sole. The consistency of a cow’s foot is similar to a hard rubber tire on a car. It doesn’t take much for all of that weight to press those rocks in there. And then, over time, continually putting pressure on those can drive them deeper and deeper into that sole.

The spray I’m using is called chlorhexidine. It’s an antiseptic. I’m using that to not only irrigate the foot and try to clean out any of the debris that’s in there, but also disinfect, because this has punctured through to the corium, and there’s a bit of infection starting to set in. It’s not only the rocks that can cause the problem here. What has happened is we have small areas of separation around that those rocks have caused due to the cow’s natural response of trying to release that sole to try to heal this problem up. So that loose layer of horn needs to be removed as well, those small, little jagged edges. So that’s what I’m trying to clean up. But the idea is to try to remove as much of that as you can safely so you don’t get debris and stuff packed in there and reinfect the area later.

The grinder I use to do the majority of the shaping of the foot. In this case, I use it also to prepare that other claw to apply a rubber block to it.

What the rubber block does is elevates that injured claw off the ground and keeps her from walking on this damaged one. I will often use a salicylic-acid wrap to treat these. And what that does is it will kill any potential bacteria, specifically the bacteria that cause digital dermatitis. It’s an infection that cows can get. If that infection sets in, it can actually keep this area open and prevent that corium layer from producing the hard outer layer, so it’ll remain open. So what the salicylic acid does is it kills that bacteria, and it will help slough away any of the dead skin and stuff in there.

This trim went well. We were able to remove all of the rocks from this and get it elevated, so she should have no problems healing this up.

In natural environments, they will actually shed on their own. They wouldn’t need trimming from humans, because the hoof has got a natural hydration level. As it starts to dry out, it’ll flake away and fall off the foot. On farms, they don’t get that natural shedding process. So the hoof on the bottom of the foot stays hydrated all the time, so it doesn’t fall away. And that’s why we trim them, to recreate the natural angles that they’re supposed to be.

Now, when it comes to lesions and things like that, they would heal themselves over time as well, but it just takes much longer to do that. So by a process that would normally take two to three months, maybe, to heal, we can make heal in week to 10 days. We can provide comfort almost immediately when we trim them. So that’s why we do that.