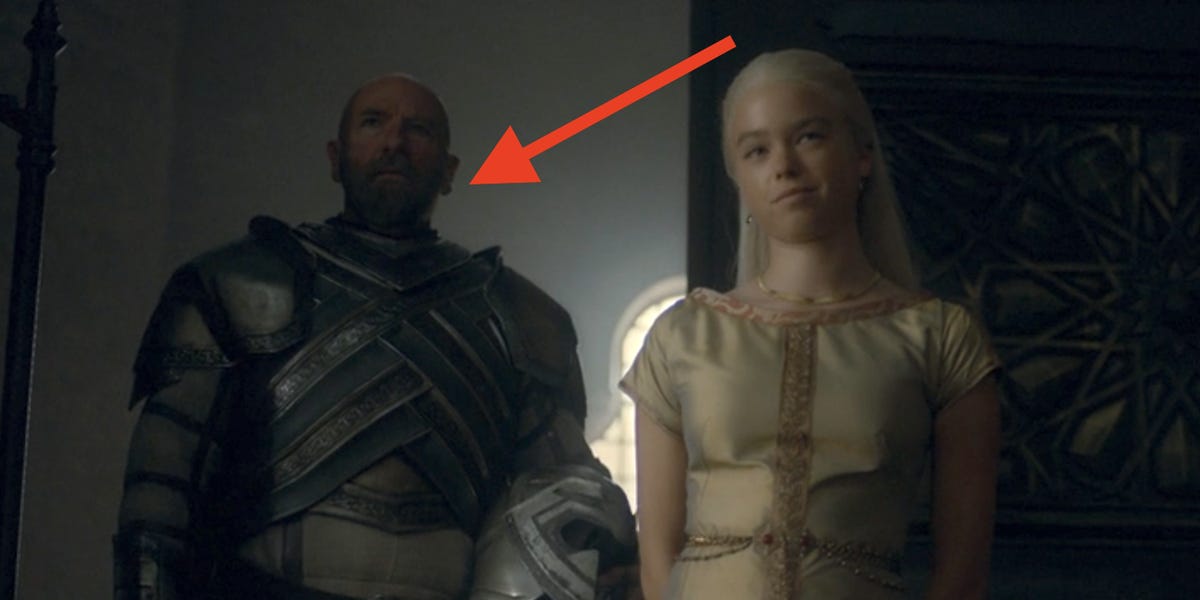 First up, where did Harrold Westerling go?

The Lord Commander of the Kingsguard, Ser Harrold Westerling, was last seen in episode nine: “The Green Council.” He refused the order given by Otto to kill Rhaenyra, Daemon, and their children.

Instead, Ser Harrold removed his white cloak and said he had no one to serve until there was a new king (or queen). So where’d he go? Did Otto let him leave the castle? Is he going to keep his oath to Viserys and Rhaenyra, or will he serve Aegon? Maybe he’ll choose neither, and vanish into Westeros, but either way we’d like to know his whereabouts in season two.

What did Otto do with the other lords and ladies who refused to bend the knee to Aegon?

Lord Caswell was executed by Otto’s men after he tried leaving the Red Keep to warn Rhaenyra about the usurping of her throne.

But what did Otto do with the several others lords and ladies who refused to bend the knee in the throne room? Are they imprisoned? Also dead? Being held for ransom?

Last we heard of Mysaria, Larys was telling Alicent that he could take care of the network of spies overseen by “The White Wyrm.” Then we saw Mysaria’s house on fire — but it’s highly doubtful that she’s really dead, especially since we never saw her body. So, where did she go? Who will she serve in the coming civil war?

Is Gwayne Hightower going to reenter the story at some point?

In the pilot episode, Otto’s son (and Alicent’s older brother) Gwayne Hightower jousted against Daemon Targaryen and took a hard fall. He never appeared again in season one, but could he come into play for season two now that Otto’s taking charge in King’s Landing? It seems like the Greens would use all the allies they can get.

And when will the show actually mention that Alicent and Viserys had a fourth kid?

As we noted in this analysis piece from earlier in season one, the opening credits now show four bloodlines coming from Alicent and Viserys. They had a fourth child together — a boy named Daeron who is currently living in Oldtown with his uncle Lord Hobert Hightower (Otto’s older brother).

“Fire and Blood” author George R.R. Martin said in a blog post that he and showrunner Ryan Condal hadn’t found a narrative place for him in the first season, but assured fans that we’d see Daeron in season two. We’re curious to see how they will incorporate that, and how they’ll explain Daeron’s lengthy absence during all the action in the first season.

For more on “House of the Dragon,” read our breakdown of the eight best details you might have missed in the season one finale.

Will Aegon ever learn about the prophecy inscribed on Viserys’ old dagger?

Alicent gifted the Valyrian steel dagger to Aegon on his coronation day. The blade, as Viserys showed Rhaenyra in episode four, has the prophecy from Aegon the Conqueror inscribed on it — a secret revealed when the dagger is heated with fire. The blade has been passed down through generations of Targaryen heirs, just like the secret prophecy Viserys spoke to Rhaenyra.

This little invention for the show doesn’t appear in “Fire and Blood” or the “A Song of Ice and Fire” novels, so we’re guessing there must be a good reason for its inclusion in the story. Perhaps Aegon (or Alicent or someone else) will discover the prophecy and decipher it at some point in season two.

Is there a chance Jason and Tyland Lannister swapped places in the Small Council?

OK, we know this is a little out there, but hear this out: The “Tyland” Lannister we saw at the Green Council meeting in episode nine seemed way too comfortable with spilling the beans about the “long laid” plans to Alicent. That behavior is more in line with Jason Lannister — the bumbling man who made overtures to young Rhaenyra during the stag hunt and presented the king with a flashy spear.

Tyland was also introduced during the Stag Hunt, but he was the twin who approached Viserys to talk about the war in the Stepstones. He was much more cautious and deferential.

Is Tyland off taking care of soldier-focused Lannister business while Jason enjoys conniving with Otto and others?

Or maybe both twins are simply prone to blabbing, and it really is Tyland Lannister on the Green Council.

Whatever happened to little Willem Blackwood?

This is a standout character we’d love to see return. In episode four, Willem Blackwood came to Storm’s End to offer his hand in marriage to the then-young Rhaenyra. Willem killed another young lord, Jerrel Bracken, when a spat broke out between the two young men, and we never heard of him again (though House Blackwood was mentioned later in references to the historical enmity between these two families).

Willem might make for a good ally for Rhaenyra — or perhaps the years would have soured his opinion of her since she simply left the room after his proposal while the fight was breaking out.

Did Viserys really send the moon tea to Rhaenyra?

At the end of episode four, Grand Maester Mellos brought moon tea to Rhaenyra’s room. This is a fictional beverage in Martin’s Westerosi universe that women can drink to prevent a pregnancy or abort an existing one.

Mellos said it was sent by King Viserys, but was it really? He had seemed to believe Rhaenyra when she told him nothing had happened (though in reality she did have sex with Criston — just not Daemon). Maybe he sent it to just cover all his bases.

Or maybe someone like Larys or Otto conspired to have it sent to Rhaenyra’s room. That way Larys could break the news to Alicent Hightower and sow further division between the two young women because they knew Alicent would respond negatively.