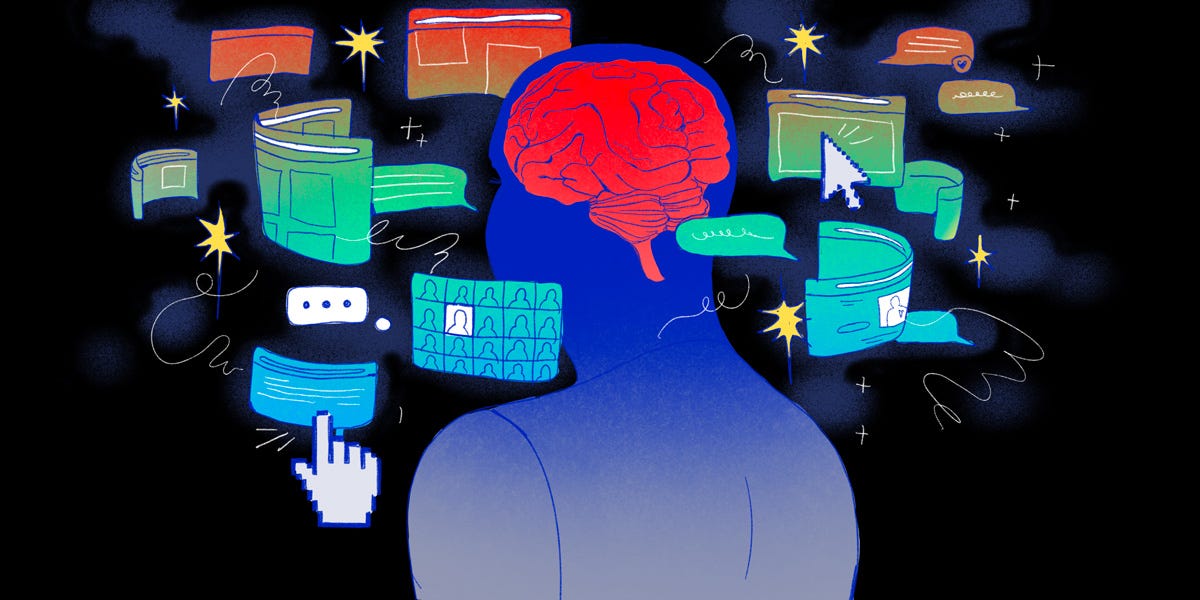 Philip O’Keefe does a lot of things around the house these days without lifting a finger.

He can turn the lights on and off in any room, pay his bills and shop online, see friends with Zoom, or play a game of solitaire or mah-jongg.

And he does it all using only his brain.

O’Keefe has amyotrophic lateral sclerosis, also known as ALS, which makes it nearly impossible to use his hands to type or text. But because of a new device implanted inside the blood vessels at the top of his head, he can harness his thoughts to propel a computer’s actions: Click, zoom in, move the mouse right, move it left.

The device is called a Stentrode, and it’s one of the very first implantable mind-reading brain-computer interfaces. O’Keefe, who lives in Melbourne, Australia, is one of fewer than 40 people worldwide to have a functioning BCI device implanted into their skulls.

To use his device, O’Keefe simply thinks about performing a certain movement with his body. As his brain lights up with electrical signals, the Stentrode — which is wired up in key blood vessels in O’Keefe’s brain — reads his thoughts.

It sends those neurological signals down a wire into his chest, where a Bluetooth transmitter about the size of a pacemaker wirelessly relays the signals from O’Keefe’s brain to a computer. The computer then decodes the signal, turning the idea into a useful action, like a mouse click.

“Whatever you can do on a computer, I can do,” O’Keefe told Insider using his BCI. “At this stage, I am a bit slower than you would be, but there is the ability to do almost anything — if I want to.”

O’Keefe had his Stentrode device implanted in spring 2020, thanks to Australia’s relatively lax, risk-based regulation of medical devices. The device arrived stateside this year after six years of regulatory back-and-forth between its manufacturer, a company called Synchron, and the Food and Drug Administration. On August 17, a man with ALS became the first US patient to have his Stentrode officially switched on.

The man, whose identity has not been released, is unable to move his arms, move his legs, or speak normally on his own. But after a few months of training at his home near New York City, he can use his brain-computer interface to send an email saying “hi” to his caregiver or search “pharmacies” on Google. Each task takes him roughly 90 seconds.

Soon, physical therapists and neuroscientists hope he’ll be able to develop a skillset similar to O’Keefe’s.

“It’s not an easy task to learn — it’s quite cerebral and challenging — but he’s doing great,” David Putrino, a longtime BCI expert who’s the director of rehabilitation innovation at Mount Sinai, said.

Stephen Hawking believed BCIs were the ‘future of communication’

When you consider that roughly 30,000 people across the US have ALS, it’s easy to see why Putrino calls this first US patient a pioneer. But he’s trying out BCI tech not just for others with his condition but also for millions of paralyzed people who’ve suffered strokes or been in car crashes, as well as those who struggle to use their hands because of diseases like Parkinson’s.

“I believe the future of communication is brain-computer interfaces,” the physicist Stephen Hawking, perhaps the most famous ALS patient, said in his final book.

For now, the reality of BCIs is far more mundane, and quite slow-paced. Thomas Oxley, the CEO of Synchron, said it was like “using your smart-TV control to change your Netflix password” — one character at a time.

In the decades to come, Oxley said he envisioned BCI surgery becoming more routine, with “a hundred million people” around the world using the implants to navigate conditions like arthritis, multiple sclerosis, and muscular dystrophy. As mobility wanes with the wear and tear of aging, Oxley said he imagined BCIs would be like LASIK eye surgery for communication.

“It’s going to help you exist in the world in a better way,” he said.

BCIs are supremely difficult to engineer because in addition to training the computer, technicians have to train the users to reliably employ the same thought patterns to get the computer to do exactly what they want. Each person’s brain works a little differently, using slightly different neural pathways and thought processes to achieve tasks.

“For the next 20 or 30 years, this is about giving people back control of the digital world,” Oxley said.

It’s a basic, “clunky” fix, Oxley said, but for the more than 175,000 people in the US who are “locked in” by spinal-cord injuries, and often unable to work as a result, this first US patient’s surgery could be revolutionary.

Implanting electrodes in the ‘natural highways’ of the brain

BCIs operate by reading signals from the primary motor cortex of the brain, which controls voluntary movements. They’ve been around since at least the 1970s, but until the late ’90s, they required users to wear large head caps and wires, making them useful only in clinical settings and labs — more of a high-tech science experiment than an assistive device.

Implantable devices are more practical for patients to use on their own, but they come with a set of risks from the implantation process, including infection. Oxley, a neurosurgeon by training, hopes he’s largely avoided that issue by using a routine, minimally invasive technique for his new implants: a small mesh tube called a stent.

Stents are tiny pieces of scaffolding (in this case, made of platinum) that surgeons insert into airways, blood vessels, or blocked arteries of the body. They’re often used to open up passageways in the heart or the lungs, but with Stentrodes, they allow a tiny network of electrodes to be implanted directly into people’s heads via a vein in the neck.

“The natural highways in the brain are the blood vessels,” Oxley said.

Synchron’s device (pictured below) uses just one wire, which travels from a pacemakerlike receiver in the chest of a patient up into key blood vessels in the brain, right next to the primary motor cortex.

The billionaire business magnate Elon Musk has often talked about performing similar work in people with his company Neuralink. In 2020, Musk said his tech for humans was going to be the “size of a large coin” and that it would “replace a piece of skull,” a design that sounds riskier and more prone to infection than Synchron’s, which requires no puncturing of the head.

Musk had said that he hoped to start human trials of his own brain-computer-interface devices by the end of 2022, but no such trials have been announced. The only beings we know of who’ve tried out Neuralink’s tech are a pig and a monkey.

In 2021, Neuralink’s president, Max Hodak, left the company, and in 2022, he became an investor in Synchron. In August, Musk reached out to Oxley about a prospective investment in Synchron, Reuters reported.

In addition to helping people with disabilities, it’s possible BCI technology, whether implanted or worn on a cap, will have military applications. Pilots could fly using only their brains, or soldiers could keep their hands free on the battlefield to multitask. Researchers at NASA have already used BCI caps to determine when pilots may be more likely to make mistakes, which could be useful for early alarm systems.

Some regulatory agencies, like the Federal Aviation Administration, are thinking about the future of BCIs. But that means privacy, ethics, cybersecurity, and insurance policies all need to be considered in a way they haven’t yet, said Karen Howard, an artificial-intelligence expert and the director of the Government Accountability Office’s science, technology-assessment, and analytics division.

When people think of BCIs, they imagine “science-fiction movies” and “cyborgs” that “control your brain,” Howard said. That’s the exact opposite of how these devices work now — the brain controls the computer.

In theory, things could shift the other way. Already, bidirectional BCIs can send electrical stimulation back to the brain for rehabilitation purposes, helping paralyzed patients regain movement. Someday, it’s possible the same technique could be used to treat people with seizure disorders, stroke victims, or other people with neurological issues or brain injuries, similar to what’s done with deep brain stimulation.

As technology advances, we’ll have to ask difficult moral and ethical questions about the use of BCIs.

“Might it be possible someday for a military, perhaps, to design a device that communicates with soldiers’ brains and reduces their fear level so that they’ll dive into a dangerous situation?” Howard said. “If agencies wait too long to think about this, when a device becomes available, it’s almost too late to start thinking about how to regulate it.”

In the coming months, Oxley hopes to include at least five more patients with severe disabilities in his US safety trial. If that’s successful, the neurosurgeon is envisioning how the same kind of system could be used as a diagnostic tool for neurological issues like Parkinson’s or even as a therapeutic delivering targeted stimulation to the brain for issues like depression and obsessive-compulsive disorder.

When pressed, Oxley acknowledged that there could be even wider, more mainstream demand for his device someday — when “you don’t want to keep picking up your phone or using your hands” to interact with the internet, he said. But it’s going to take decades to get there.

“I reckon that’s 2050 or later,” he said of the prospect of BCIs for people without disabilities. “Before that happens, there’s going to be, I think, millions of people getting BCIs who have severe disabilities.”

Even for that targeted, limited usage to become reality, the FDA needs to sign off on the Stentrode as a medical device for it to be marketed to people with severe forms of paralysis. That alone could take several more years of clinical trials.

In Australia, O’Keefe’s brain sends a recognizable signal out, and his device interprets it into a computer click. For him, this independence gained, however tiring and clunky, is unbeatable.

“There is no doubt from my perspective: Being involved in this gave me a reason to live,” O’Keefe said. “It gave me back a lot more enjoyment about life and gave me things to do. It gave me the ability to stay in touch with what’s going on.”