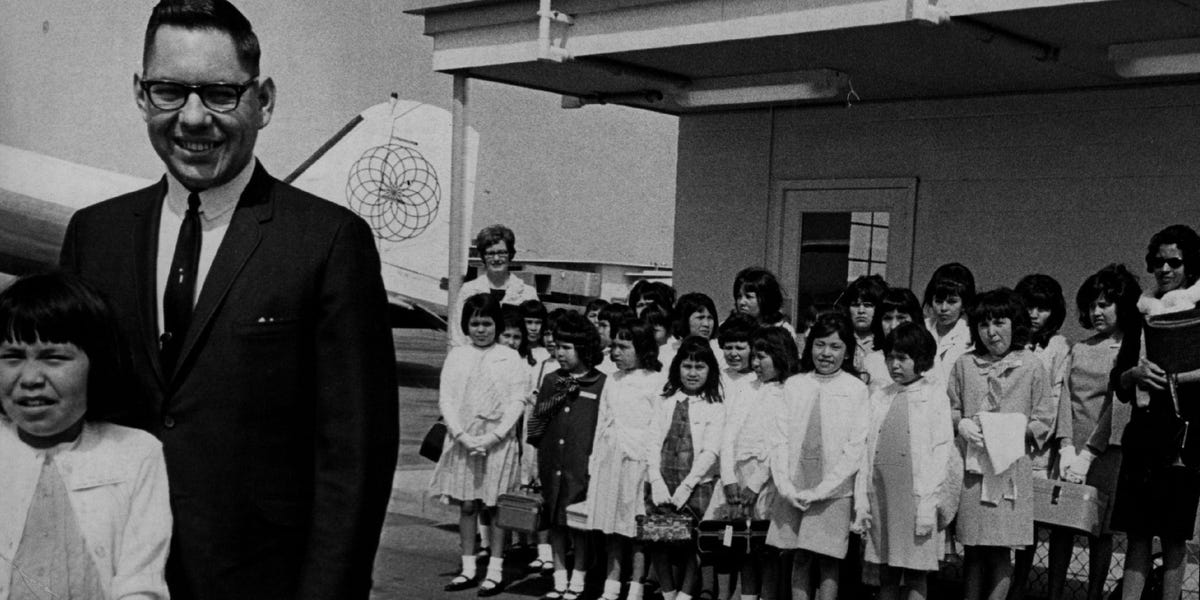 In January 2018, Chad and Jennifer Brackeen adopted a Navajo baby boy, winning a legal battle with the Navajo Nation after it sought to place the boy with a Navajo family. Soon after, the Texas couple looked to adopt his younger sister, but ran into more opposition: The girl’s extended family wanted to take her in, too.

The Brackeens again took things to court, suing to overturn an act that gives preference to Native families in child custody proceedings.

The case has wound its way up to the highest court in America. This fall, the Supreme Court is reconsidering the Indian Child Welfare Act (ICWA) of 1978, which protects Native American children from being removed from their families and tribes. It was enacted after studies in 1969 and 1974 showed that 25 to 35% of all Native children were separated from their families and placed into foster homes, adoptive homes, or institutions.

The studies also revealed that 85% of all Native children in foster care were living in non-Indian homes, even when they had fit and willing relatives.

ICWA emerged in response to a long history of government and private actors removing Indian American children from their homes, buttressed by policies that divested Native American tribes of sovereignty, according to Dan Lerewenz, assistant professor at the University of North Dakota School of Law.

“Indian children have been pawns in both federal and state policy for hundreds of years,” Lerewenz said.

Among those private actors — and among the opponents to ICWA — was the Church of Jesus Christ of Latter-day Saints (LDS Church). In 1954, the church started a program that placed Native children into members’ homes to educate and acculturate them into their way of life. An estimated 50,000 Native American children participated in the program.

Although the program began with good intentions, critics said the church’s attempts to convert and assimilate Native children amounted to “cultural genocide,” leading to the destruction of Indigenous culture, according to lawyer Craig Vernon. Several Native Americans who participated in the program have also sued the church, alleging sexual abuse.

“The ICWA was passed to try and stop what the Mormons, Catholics, and federal and state governments did for years, which was essentially cultural genocide,” Vernon told Insider. “It will be disgusting if the Supreme Court overturns ICWA and eviscerates all the progress people have fought so hard for.”

The removal of Native American children is rooted in colonization, according to Margaret Jacobs, professor of history at the University of Nebraska-Lincoln.

“Colonizers interfered with Native families and removed children, often for labor,” Jacobs said. “A lot of Mormon families brought Indian children into their families, ostensibly adopting them, but often using them more for labor.”

The practice was supported by state policies. In 1850, California passed a law that allowed white settlers to take in Indian children as indentured servants. In the late 19th and early 20th centuries, the US government paid states and religious groups to run Indian boarding schools that sought to eliminate traditional American Indian culture through assimilation and education. Many Native Americans recalled “torture and hatred” at these schools, according to the AP.

Both the government and religious groups employed “rhetoric of benevolence” to justify their attempts at assimilation, according to Jacobs.

“It was always the rhetoric of, ‘The poor Indian child needs to be saved from the impoverished reservation,'” Jacobs said. “Ironically, all the impoverishment was a result of colonization.”

The government retaliated against Native American families who resisted these programs by withholding a tribal community’s rations or even bringing in the police, Jacobs said.

The LDS Church’s Indian Placement Program adopted a similar “rhetoric of benevolence.” According to the Book of Mormon, Native Americans are descendants of the Lamanites, a group of people who had “hardened their hearts against” God and had been cursed with dark, “flint”-like skin as punishment — distinguishing them from those with “exceedingly fair and delightsome” white skin.

Part of the LDS Church’s mission was to help save Lamanites by acculturating them as their own. In the 1800s, the church’s second president Brigham Young advocated “purchasing” Native American children “into freedom” by buying them as slaves and then converting them into Mormons.

In 1954, the church launched its Indian Student Placement Program, which aimed to “provide Lamanite children with educational, spiritual, social, and cultural opportunities.” Church members went into Native American communities to recruit children. By the 1970s, around 5,000 Native children had been converted and were living in Mormon homes.

LDS leaders widely regarded the program as a success. At an October 1960 conference, Spencer Kimball, the chairman of the church’s Committee on Indian Relationships, claimed Native Americans who participated in the program were becoming physically lighter.

“The day of the Lamanites is nigh. For years they have been growing delightsome, and they are now becoming white and delightsome, as they were promised,” Kimball said. “These young members of the Church are changing to whiteness and to delightsomeness.”

Some experienced sexual and cultural abuse

Critics of the Mormons’ program argued that taking children away from their families harmed Native American culture, amounting to cultural colonialism, even genocide.

“It really alienated a lot of Native children from their families and their cultures. You hear about children returning to their families for the summer and feeling out of place,” Jacobs said.

In 2016, four Native Americans who had participated in the program sued the LDS Church, alleging sexual abuse. One of the plaintiffs, who goes by the pseudonym “RJ,” was ten years old when he was allegedly sexually molested by his stepbrother. RJ also “suffered physical, emotional, and cultural abuse by his foster mother,” including having his mouth washed out with soap whenever he spoke Navajo to other placement children in the home, according to the complaint. RJ was moved to two other foster homes, but was again sexually abused, the complaint alleged.

A LDS member who worked for the Indian Placement Program as a counselor said she had heard of similar instances from children as young as elementary students, court documents show.

“I did have two children tell me that the family wanted to see her tits is what they called it… They wanted to see the difference in colors, skin color,” the church member said in her deposition.

Joann Black, a member of the Diné people from the Navajo Mountain, was placed with her first foster family in June 1973. She said she “loved being on placement” because she found opportunities she couldn’t find on the reservation.

“Being on the reservation is way different than being raised in the Anglo community. They have piano lessons, dance lessons, and things like that for their kids,” Black told Insider. “But in our culture, we were lucky enough if we got to join a sport.”

The LDS Church’s program was dismantled by the 20th century, but its complicated legacy has reemerged amid conversations about the Indian Child Welfare Act.

Plaintiffs in the case before the Supreme Court argued that ICWA is racially discriminatory. But experts disagree.

“It’s not about race, it’s about Indian identity and culture. It’s that there is a benefit for a Navajo child to grow up in Navajo culture,” Jacobs said, stressing the importance of acknowledging the history of removals and how it damaged and traumatized Indian communities.

The Supreme Court’s ruling on ICWA could have a domino effect on other laws that protect Native American rights, experts said. If it rules that ICWA is racially discriminatory and thus unconstitutional, it could jeopardize laws that guarantee Indian lands and grant tribes self-governance, since they also rely on the definition of Native Americans as a legal — not racial — category of people, according to Lerewenz.