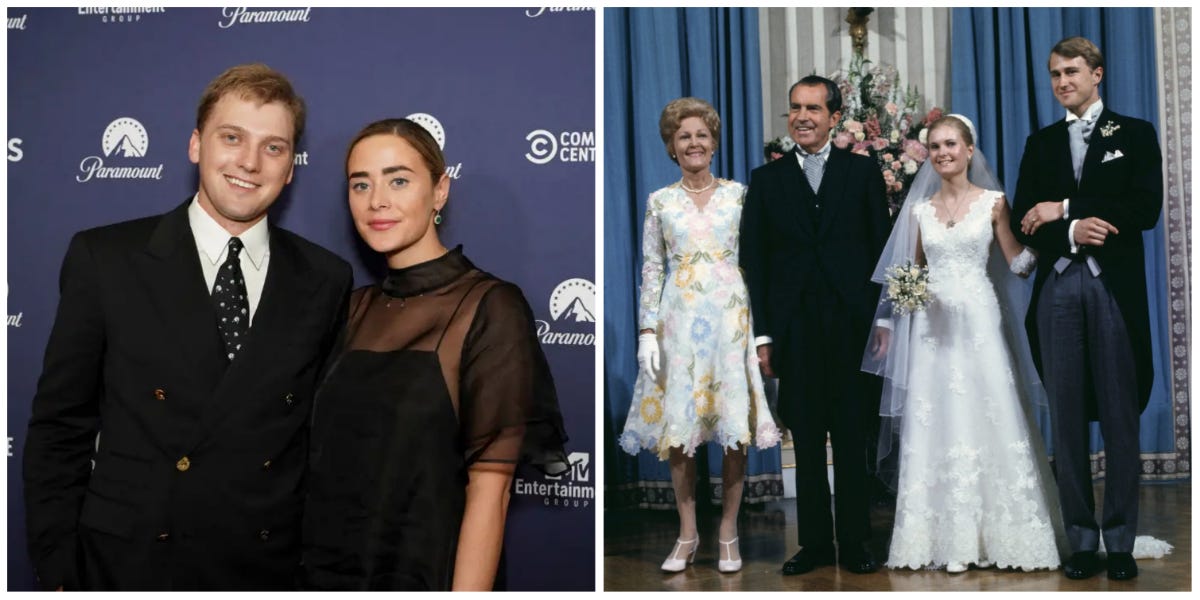 On November 19, the White House will become a wedding venue as President Joe Biden’s granddaughter Naomi marries Peter Neal on the South Lawn.

Biden and Neal’s nuptials will be the 19th wedding ever held at the White House. White House weddings began as private family affairs in the early 19th century, and gradually grew into events of widespread public interest that have shaped American history.

“The Nellie Grant wedding, the Alice Roosevelt wedding, the Johnson weddings, the Nixon weddings that have occurred — those are huge moments,” White House historian Lina Mann told Insider. “There’s tons of press coverage. You have Tricia Nixon featured on the cover of Life Magazine. People are reading about it, they want all the details. I think that all of these huge weddings, especially of presidential daughters, help set wedding trends.”

Myra Gutin, a professor at Rider University and author of “The President’s Partner: The First Lady in the Twentieth Century,” says that the level of public interest in Biden and Neal’s wedding remains to be seen given the current political climate.

“I really wonder at this point in time, with all of the political turmoil that has gone on, just how much focus will be placed on Naomi Biden’s wedding,” she said. “I don’t want to say that it seems like an afterthought because that doesn’t seem fair to Naomi Biden or her fiancé, but I wonder if it will have a little bit less historical significance this time around. It almost seems like something as personal as a wedding becomes trivial, but that’s just my take on it. There’s another possibility and it could actually be a nice respite from all of this chaos that we’ve all been witnessing.”

There’s no particular protocol in place for White House weddings, but certain traditions have developed over the years.

One tradition that could make an appearance at Biden and Neal’s wedding is cutting the wedding cake with a military sword.

“For Alice Roosevelt’s wedding in 1906, she cut her cake at her reception with the sword of a military aide,” Mann said. “Then, at Lyndon B. Johnson’s daughter Lynda Johnson and Charles Robb’s wedding in 1967, Alice Roosevelt attended her wedding, and Lynda ended up cutting the cake with Charles’s sword. That sword wedding cake cut is a tradition that I’m always waiting to see if it’ll be repeated.”

Mementos from White House weddings become part of history, as well. Amid the Smithsonian National Museum of American History’s archives: a wedding announcement from President Grover Cleveland and Frances Folsom’s nuptials in 1886, and a packet of rice given to guests to toss at Luci Baines Johnson and Patrick Nugent’s wedding in 1966.

“I believe the Smithsonian American History Museum also has a piece of [Johnson and Nugent’s] wedding cake in their collections, so that’s pretty wild,” Mann said.

Part of the historic nature of White House weddings is their rarity.

Not all first families have opted to hold weddings at the White House when they had the opportunity to do so. Gutin says the fact that the president and first lady are hosting their granddaughter’s wedding is a “testament to the fact that they’re a very close family.”

“I think that has always contributed to a sense of who Joe Biden is — the fact that he is so strongly rooted in his family and in those relationships,” she said.

Biden and Neal’s wedding on the South Lawn will be the first in nearly a decade, since President Barack Obama hosted a low-key ceremony in the Rose Garden for his official photographer Pete Souza’s marriage to Patti Lease in 2013.

“There have only been 18 weddings in our 200-plus year history of the White House, so I think that’s significant,” Mann said. “Not just everyone can get married at the White House. You have to have a very personal connection to the president, usually a family member. It’s not a typical wedding venue.”