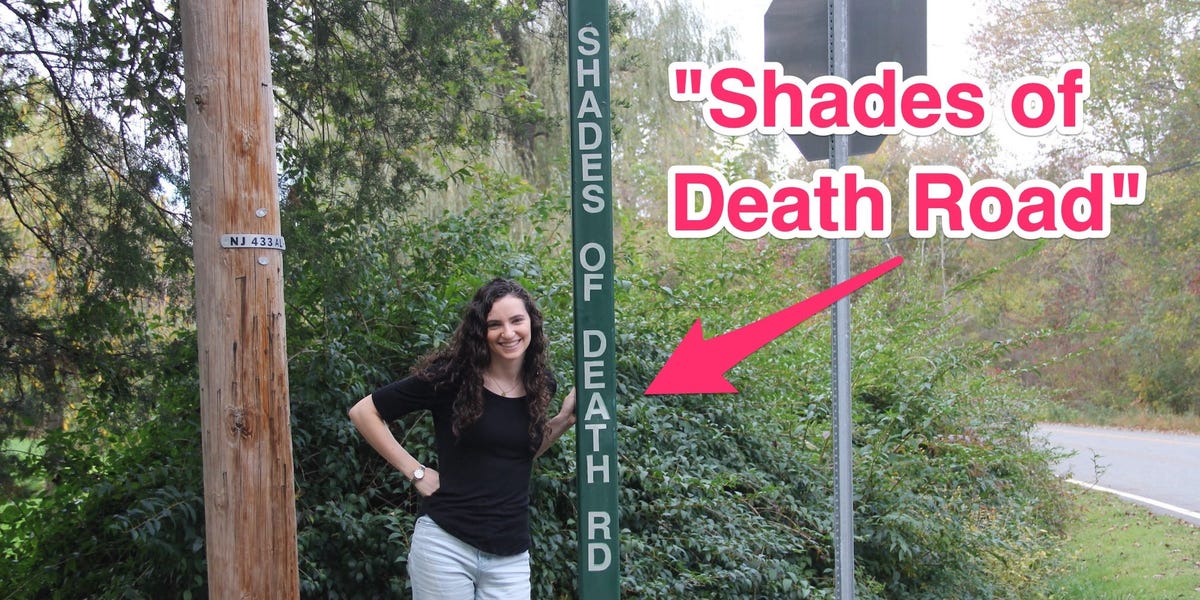 A few years ago, I wrote a story about the most haunted roads to drive in the US. I’ve been dying to visit them ever since.

Three of the spookiest roads — Riverside Drive (nicknamed “Annie’s Road”), Clinton Road, and Shades of Death Road — happen to be in New Jersey, within driving distance of New York City, where I live.

With the blessing of my editor, I embarked on a haunted road trip to check out the mysterious sites for myself. My partner came along to take photos so I wouldn’t have to walk through creepy streets in the middle of the woods alone.

The road is nicknamed for the ghost of a woman named Annie who, as legend has it, was hit by a truck and killed on her prom night in the 1960s.

Motorists have reported hearing screams, seeing mysterious fog, and experiencing interference in their phones and cameras.

A red bloodstain was also said to appear on the road until it was repaved in the early 2000s.

Some believe that the spirits of the cemetery also haunt the road with unusual fog patterns and screaming sounds.

Walking along “Annie’s Road,” we didn’t hear any screams or notice any signs of paranormal activity.

I did get some strange looks from passing drivers as I walked along the gate between the road and the cemetery.

I also didn’t notice any interference with my electronics.

I printed out driving directions in case my phone lost service, but everything seemed normal.

No unusual fog patterns, either.

Some have reported seeing figures emerging from clouds of fog.

I asked a few locals if they were familiar with the legends of “Annie’s Road.” A woman named Denise said she’d never seen anything there, but she warned us about our next stop, Clinton Road.

Denise said she’d visited Clinton Road with her niece about five years ago and warned us that it’s “super haunted.”

“I’m telling you, we went on that road one night because it was Halloween,” she said. “It scared the s— out of me, I swear I saw something. I literally thought I saw somebody watching us in the woods and run across the street right before our headlights hit.”

As we drove towards Clinton Road, I couldn’t help but feel like that character in a horror movie who is warned against visiting a haunted place but decides to go anyway.

You know, those characters that make you yell “Don’t go inside!” at the screen.

It seems obvious that if a place is said to be haunted, you should stay away, right? But something about ghost stories continues to draw people in.

After about half an hour of driving, we reached Clinton Road in West Milford, New Jersey.

The road contains the remains of an abandoned iron furnace, as well as several bridges where there have been reported ghost sightings.

According to local folklore, “The Ghost Boy of Clinton Road” will return coins people throw into the brook that runs alongside it.

Some visitors have reported seeing the boy’s reflection in the water. Rumors of aliens and Satanic cult activities also keep visitors on edge.

First, we stopped by Clinton Furnace, an abandoned iron furnace from the 19th century.

The furnace was established by William Jackson in 1826 and closed in 1852. The crumbling structure is still visible from the street.

The woods surrounding the abandoned furnace were full of “no trespassing” signs, so we couldn’t get a closer look.

The furnace was also fenced off.

We stopped at a nearby bridge to see if it was home to the haunting spirit.

The bridge was near the abandoned Clinton Furnace, and it featured a surprisingly high drop into a gorge.

The bridge had a pentagram spray-painted on it, so it seemed like a good place to start.

The pentagram symbol has many historical uses and associations. Today, it’s often used in modern-day practices of witches, pagans, and occultists (those who believe in supernatural beings).

I tossed a few coins into the brook to see if the local ghost boy would return them.

Visitors have reported seeing a boy’s reflection in the water after throwing in coins, or hearing coins hit their car as they drove away, according to Weird New Jersey magazine.

I didn’t get my change back, nor did I see any signs of a ghost boy.

A small price to pay for the adventure.

We continued on to another bridge on Clinton Road, situated on a sharp turn nicknamed “Dead Man’s Curve.”

“Dead man’s curve” is a ubiquitous name for a dangerously sharp turn. There’s even a 1964 song called “Dead Man’s Curve” by the rock duo Jan and Dean.

I tossed the last of my coins into the brook and waited.

Once again, there were no signs of paranormal activity.

While we didn’t see any ghosts (or get our coins back), Clinton Road features several gorgeous hiking trails that I’d visit again.

Fall is a great time for road trips to enjoy all of the foliage.

At last, we began the 50-minute drive to our final destination: Shades of Death Road in Warren County, New Jersey.

Yes, that is the real name of the street. It was amusing to hear my GPS chirp in its peppy voice, “Turn right onto Shades of Death Road.”

As if the name “Shades of Death” wasn’t scary enough, some say it’s derived from a series of grisly murders that occurred there in the 1920s and ’30s.

By other accounts, the road is named for malaria outbreaks that occurred in the 1850s.

For such a spooky name, Shades of Death Road is actually pretty quaint.

Country shops and well-manicured homes line the street, as well as horses and cows grazing in their enclosures.

Like Clinton Road, the surrounding woods warned against trespassing.

Perhaps one too many ghost hunters have been found wandering in the woods.

We ducked into a store to ask locals about the road. I kid you not, the news playing on the radio inside announced that a body had been found nearby.

I froze. It was straight out of a horror movie.

According to the radio report, police were investigating a murder after the body of a 30-year-old woman had been found in the woods. I contacted the Warren County Sheriff’s Office to learn more.

Rich McQuade, an investigator at the Warren County Sherrif’s Office, told me he wasn’t aware of any such ongoing investigations.

“I remember several deaths on that road,” he said. “It’s probably an old story if I’m not mistaken.”

While we didn’t see any ghosts or experience any paranormal activity on our haunted road trip, the legends remain fascinating bits of folklore.

I do love a good ghost story.