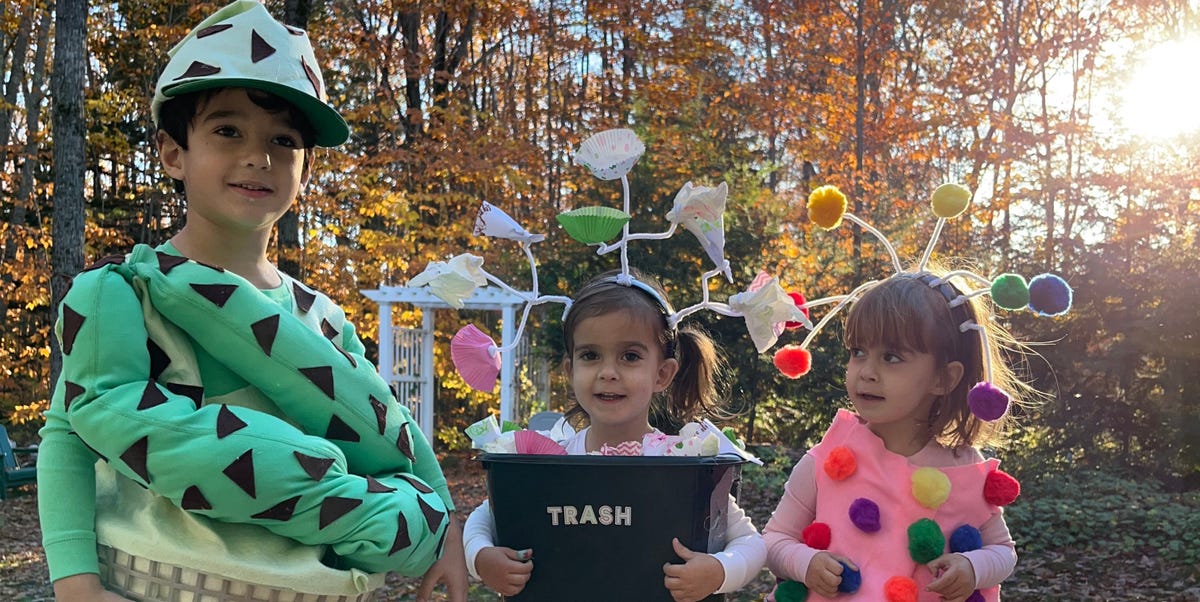 When my 4-year-old son asked to be a sand dune for Halloween last year, I consulted one of my favorite parenting groups on Facebook to see if anyone had ideas to pull it off. Most comments told me to ask him again in a couple of days because toddlers change their minds all the time, especially when it comes to costumes. I did ask him again, and he was set on being a pile of sand. This time he added, “with a seagull on my head.”

The costume was a hit, both online and in person as we went down our street trick or treating. My 2-year-old twin daughters were dressed as sand buckets to go along with the dune, and my husband and I were towels.

We had such fun that this year we asked early what our kids wanted to be, knowing that they would all come up with weird toddler ideas. They didn’t disappoint.

This year my son will be a mint chocolate chip ice cream cone, one twin will be a cupcake with sprinkles, and the other twin is a trash can full of cones and cupcake wrappers. To tie in the family costume my husband and I will be ice cream scoopers.

Since last year’s costumes were so easy to make and such a hit, we reached out again to Nguyen Le, Primary’s free costume concierge, for help. She came up with the drawings for our costumes and suggested the household items we could repurpose for each costume.

We asked a professional costume designer to help us out

Le’s drawings are equal parts cute and easy to follow. Because I’m not the craftiest person and have been known to burn my fingers with glue guns before, my husband took over the actual making of the costumes.

Le previously told Insider that she recommends parents keep it simple and use items they have lying around instead of buying store-made costumes that will be outgrown by the next Halloween.

For the ice cream cone, we used a laundry basket that we spray painted beige so it would look more like a cone, and cut a hole on the bottom so my son’s legs could go through. Then we used green pajama bottom to create the swirl effect of ice cream, and used safety pins to attach it to a green shirt.

The trash can was fairly simple. We used a plastic garbage can, cut a hole in the bottom for feet, and my husband attached a t-shirt on the top opening so we could have our daughter “wear” the costume instead of holding it or using straps. Last year we used straps with the sand buckets and it was a fail. By the second house, my kids were done with their costumes.

For the cupcake we used a plastic container we had lying around and never used because it was an awkward size, cut the bottom so the other twin could walk easily. Then we used cardboard to line the plastic to make the cupcake wrapper. For the actual cupcake, we used pink felt to create a similar shape to the ice cream cone, and then glue tons of pompoms for sprinkles.

My kids are excited to show off their Halloween costumes

While the prospect of candy at the end of the day might excite any kid, mine are particularly excited to show off their costumes, which brings me so much joy. They’ve told everyone they have encountered in the days before Halloween about their costumes.

I also like to think this is a lesson for them to think big. They wanted these original costumes, and we helped make them happen. Whether it is by using a hot gun or talking them through the steps, we are here to make their dreams come true.