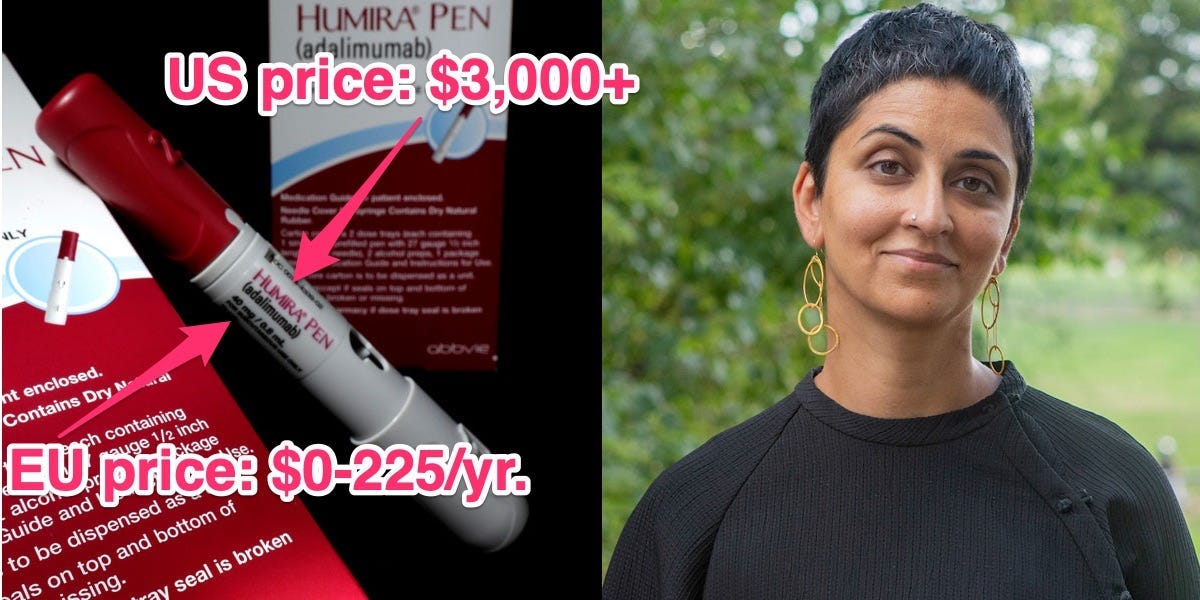 Patients in the US are paying a sticker price upwards of $3,000 per pen for blockbuster arthritis drug Humira, the country’s top-selling drug. Meanwhile, prices in Europe have decreased dramatically, ever since Humira’s principal patent expired in 2018.

In the US, Humira’s manufacturer, AbbVie, has used what are sometimes called “patent thickets” to prevent generic versions of the medicine — an anti-inflammatory which treats several debilitating diseases, including severe arthritis, Crohn’s disease, and ulcerative colitis — from entering the market. By creating a vast thicket of patents which aren’t protecting much that’s integral to the way the drug works (for example, changing the dose, or tweaking the way the product is manufactured) drugmakers like AbbVie are able to hold on to their drug monopolies for decades after they should’ve expired.

Priti Krishtel, a leading health justice lawyer and cofounder of the Initiative for Medicines, Access, and Knowledge (I-MAK), told Insider these patent thickets are a clear distortion of the way the US patenting system was designed to work — and they must be weed-whacked out if the country is ever going to achieve fairer prescription drug prices for consumers.

Patents are far from the only reason that there’s such a big price difference for this treatment between the US and Europe – but advocates like Krishtel believe it is an important one. The US doesn’t really regulate or negotiate the prices of drugs like countries in Europe do, so the main way American drug prices become lower over time is through generic competition. What AbbVie is doing with Humira subverts that system, Krishtel said. (Abbvie did not respond to Insider’s requests for comment.)

Krishtel won the MacArthur Foundation “genius” award in October for her decades-long work building a worldwide movement to illuminate and contest what she sees as predatory drug patenting.

About one in four Americans say they skip or skimp on prescriptions for themselves or their immediate family members every year, because of how much their drugs cost, according to Kaiser Family Foundation polling. Insurance or manufacturer coupons may lower the cost of prescriptions substantially — but the system doesn’t always work. Sometimes, the steep cost of medicines in the US is fatal.

“I just don’t think that people should have to pay their life savings for life-saving medicines,” Krishtel said.

In Europe, generic forms of the drug formerly known as Humira (adalimumab) have been on the market for four years. Users on that continent now routinely pay up to 90% less than they used to, whether they still choose to buy the brand name version of the drug, or pick up one of its new off-brand competitors.

Humira prices in the US, however, have skyrocketed by more than 500% since the drug first hit the market 20 years ago, and have increased by 60% since its primary patent expired, ballooning Medicare spending on the drug.

And AbbVie is far from the only manufacturer playing this patenting game.

Drugmakers routinely file new patents related to their bestselling old drugs, changing how they’re dosed, released or manufactured, even though no significant changes have been made to how they work. This enables big drugmakers to continue their monopolies on the market, for many years after their original patents expired — “exploiting” the patent system, as the US House Committee on Oversight and Reform reported in 2021.

‘Basically the same drug,’ but more expensive than ever

Now that cheaper generics compete with Humira in Europe, one injection pen may cost a patient nothing (in places like Scotland, where all prescriptions are taxpayer-funded), $10 (in Germany, where there’s a strict cap on co-payments) or $225 a year (in Sweden, where co-payments vary, but are also capped), according to an independent report published in 2021.

Humira’s primary US patent expired in 2016, but no generic is available yet, and the brand-name drug is so expensive that some US employers fly their Humira-users across the border to Mexico or Canada, just to save on prescription costs, Bloomberg Law reported in 2020. (Of course, the price any US patients actually pay for their prescriptions fluctuates dramatically, depending on their insurance coverage.)

The CEO of AbbVie told Congress in 2021 that “the drug is basically the same drug” it has always been. And yet, from 2016-2021, the price of Humira shot up more than four times faster than inflation, according to I-MAK.

Humira certainly isn’t the only drug “gaming the US patent system” she added, it’s just the “worst offender.” Similar issues exist for other medicines, including life-saving cancer drugs, HIV therapies, and diabetes treatments, according to a recent I-MAK report titled “Overpatented, Overpriced.”

“Basically, the higher the percentage of the company’s revenue that the drug makes up, the more incentive they have to play these patent games and extend their control of the market,” she said.

Krishtel isn’t naive about how the US patent system might be reformed — she doesn’t think that the US can just replicate how Europe does healthcare.

“We’re going to have to design a health system that works for Americans, and that is designed by Americans,” she said.

That might include more legislation from Congress, or more oversight of the patent and trademark office, she said, offering a few suggestions.

But “central to any vision of health equity for our country has to be patent reform,” she said. “There’s no way around that.”