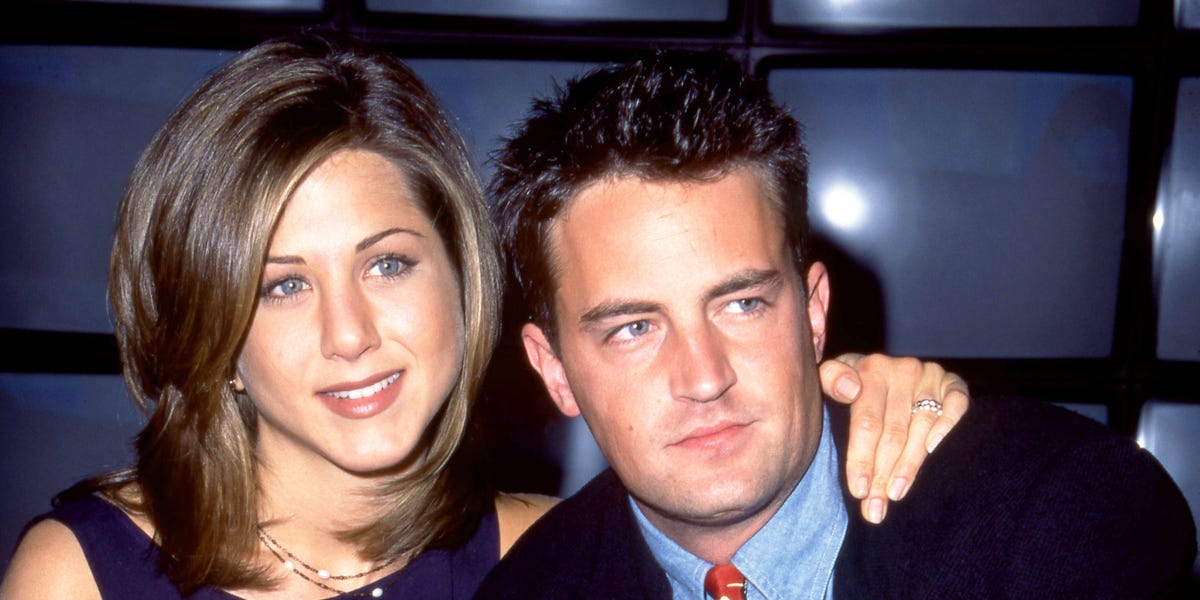 Matthew Perry said that it was “devastating” when “Friends” costar Jennifer Aniston confronted him about his alcohol addiction on the set of the hit sitcom.

In his memoir titled “Friends, Lovers, and the Big Terrible Thing,” released on Tuesday, Perry detailed his rise to fame and years-long struggles with alcoholism and drug addiction. The actor most notably played the sarcastic Chandler Bing on “Friends,” which ran for 10 seasons between 1994 and 2004.

Perry said that he “was never high while I was working,” but he revealed that season nine was “the only year I was completely sober for a ‘Friends’ season.” It was also the only season he was nominated for an Emmy for best actor in a comedy.

“You can track the trajectory of my addiction if you gauge my weight from season to season — when I’m carrying weight, it’s alcohol; when I’m skinny, it’s pills. When I have a goatee, it’s lots of pills,” he said.

Perry said that he got pancreatitis when he was 30 years old and spent “30 days and nights” in the hospital, being fed fluids through an IV. The actor said he was given “regular amounts of a drug called Dilaudid” to ease the pain, and it quickly became his “new favorite drug.”

He said that he was “high and happy” and signed the contract for seasons six and seven of “Friends” with “a feeding tube in my arm and Dilaudid flowing through my brain.”

Perry said that after leaving the hospital, he resumed using Vicodin and drinking.

“I returned for the next season of ‘Friends’ high as a kite, and everyone knew that something had to be done,” he said.

“I had been told that methadone had no side effects,” he recalled. “This was not true. In fact, it was the beginning of the end. Otherwise, everything else was going great. ‘Friends’ was still as successful as ever.”

Perry said that one day, Aniston (Rachel Green), who he previously had a crush on, went to his trailer and told him, “I know you’re drinking.”

“I had long since gotten over her — ever since she started dating Brad Pitt, I was fine — and had worked out exactly how long to look at her without it being awkward, but still, to be confronted by Jennifer Aniston was devastating,” Perry wrote. “And I was confused.”

The “17 Again” star asked Aniston how she could tell that he wasn’t sober since he “never worked drunk” and had been trying to hide his addictions from the cast and crew.

“‘We can smell it,’ she said, in a kind of weird but loving way, and the plural ‘we’ hit me like a sledgehammer,” Perry said.

In his book, Perry said that he “never worked high, but I certainly worked hungover” and would need someone to drive him to set.

The actor said that even though people caught on to his addictions, the show was too successful to be derailed by his unhealthy habits.

“Everyone would ask me if I was all right, but nobody wanted to stop the ‘Friends’ train because it was such a moneymaker, and I just felt horrible about it,” he said.