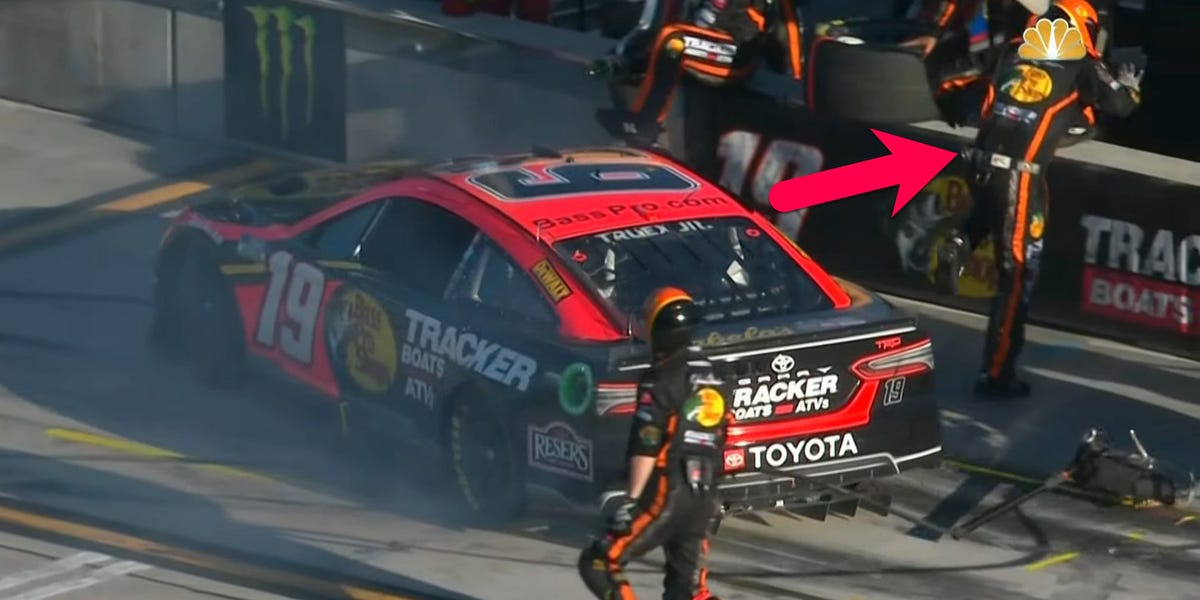 For the second time in a month, NASCAR narrowly avoided a major disaster as a car came close to hitting crew members working on pit road.

On Sunday, with 21 laps to go in the NASCAR playoff race at Homestead-Miami, race leader Martin Truex Jr. entered pit road during a caution, with defending champion Kyle Larson behind him. As Truex neared his pit stall, he quickly veered to the left, and Larson hit him from behind, causing Truex to spin.

While the move was unfortunate from a race perspective — Larson went on to win the race, and Truex finished sixth — everybody was fortunate that Truex’s crew members were able to scramble out of the way of his car, with one hopping over the wall just in time.

Initially, members of Truex’s team, including team owner and NFL coaching legend Joe Gibbs, were visibly upset, feeling that Larson was at fault. However, after the race, Truex admitted that he struggled to see with the sun directly in his eyes, suggesting he almost missed his pit stall.

“It’s really hard to see through these windshields right now with the sun like that and all the stuff covering it,” Truex said after the race. “I did see my box late for sure, so I slowed down before I turned out of the way of [Larson] there. Obviously, partly on me. I didn’t expect to get turned around. I’m glad nobody got hurt there.”

NASCAR and the crew members got lucky

What makes this situation even scarier is that the cars are traveling much faster than they may appear on television. While they are going much slower than their race speeds (170-180 mph), they are still reaching 50-55 mph on pit road, which is not far off from many highway speeds for passenger cars.

We saw a similar incident one month ago at Texas Motor Speedway, where rookie driver Ty Gibbs — grandson of Joe Gibbs — lost his cool on pit road.

Gibbs was traveling down pit road and was hit by Ty Dillon as he exited his pit box. Gibbs retaliated by slamming into Dillon’s car and forcing him to brake hard to avoid hitting NASCAR officials and pit crew members working on the broken car of Chris Buescher.

In the most recent incident, drivers will typically move to the left into the second lane before slowing down. This didn’t happen here, as NASCAR driver David Ragan explained on FS1’s “NASCAR Race Hub.”

“I see Kyle Larson really not doing anything wrong,” Ragan said. “He gives Martin Truex a foot or two going down pit road. He’s watching his [dash] to make sure he is right at that speed limit. But Martin really made a pretty quick, evasive left-hand [turn], and he slows down in that outside lane [in front of Larson]. Typically what you do is you find your pit stall and start blending over a little early so you can start decelerating.”

If you watch the replay in the video above, you can see Truex’s right-rear tire momentarily lock up from hitting the brakes while he was still in front of Larson.

“I just think this is a racing accident,” said TJ Majors, host of Dirty Mo Media’s “Door Bumper Clear” podcast. “If there is one bad thing about Homestead, it is the glare down the front stretch for the drivers. It is hard to see. So I chalk this up as a racing deal.”

Larson noted that it is more than just the sun in the drivers’ eyes.

“It’s hard to see down this pit road,” Larson said after the race. “I don’t know if fans and people realize, when you’ve got debris all over your windshield, the sun is shining straight in your face, it’s hard to see your stall. So hate that that happened. He was definitely the one I was going to have to beat.”

There is no easy solution

“The pit crew did a great job getting out of the way,” Fox Sports host Kaitlyn Vincie said on “Door Bumper Clear.” “That could have been really bad.”

“Thankfully, his pit crew was able to jump out of the way,” Ragan said. “They were really quick on their feet. It could have been a lot worse.”

What nobody has offered is a potential solution. In the case of Gibbs, he was fined $75,000, and NASCAR hopes that will be a message to everybody not to mess around on pit road. But in this incident, most agree that it was just bad luck and collectively shrug their shoulders.

“If Larson’s pit stall is down in Turn 4, further towards [the pit entrance], it doesn’t happen,” Majors said. “Things lined up just right for this accident to happen, and one little slip, and ‘bam!’ There’s no room for error.”

NASCAR has already upgraded the gear worn by pit crew members with full helmets required for anybody over the wall working on a car. After that, the only thing left might be to lower the speed limit on pit road. But as “Door Bumper Clear” host Brett Griffin noted, there is always going to be some risk for the crew members.

“The crew guys’ lives are at risk,” Griffin said. “Their health is at risk … They have got a freakin’ tons of car, tons of weight coming at them at 50 mph. These guys risk their bodies every single pit stop.”