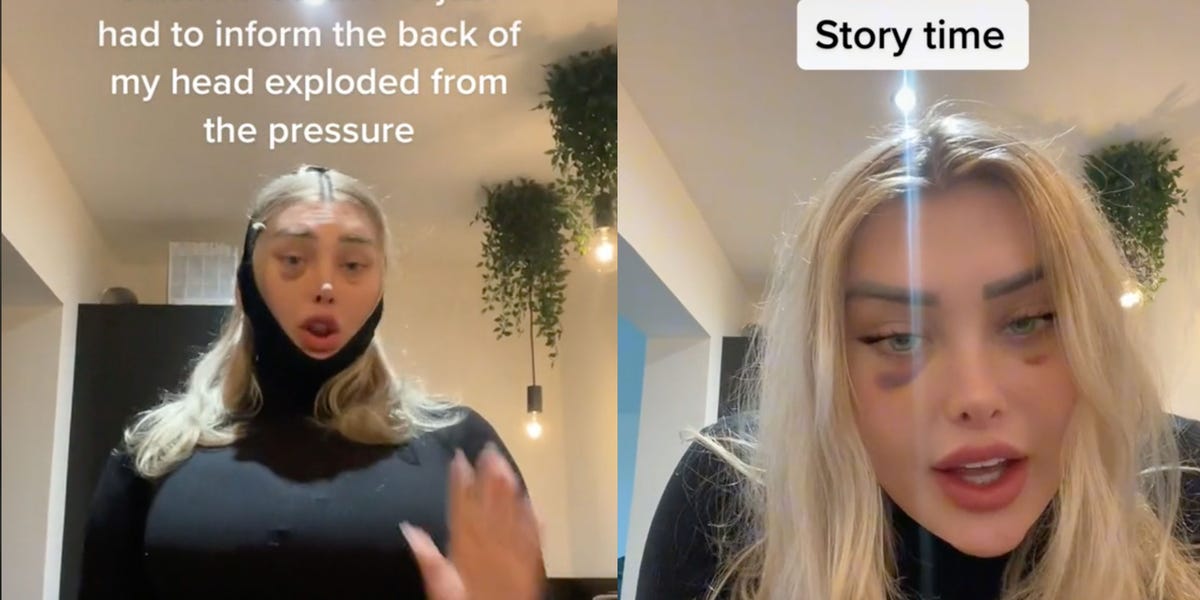 OnlyFans star Weronika said her head “exploded” during an airplane ride after a neck lift and cat-eye cosmetic surgery (which she detailed on her Instagram). The October 21 TikTok has since been viewed almost 7 million times.

In a series of storytime posts, Weronika explained that she had fallen asleep on the plane from Turkey to the UK and woke up to a lot of pain in her ear and the back of her head, where she had stitches from the top of her ear to the back middle part of her head.

“Like, my actual ear was in pain as well and I was like, ‘How is that possible? I can’t even feel my ears yet,” she said.

“Everything was really hurting, I got up, went to the toilet, and I heard this audible pop,” Weronika said, mimicking the sound of her incision popping open.

“Immediately after, I start feeling this hot liquid dripping down my neck, and I grabbed some towels and started wiping it up,” she explained.

“Obviously, it was blood but — I don’t know if anyone’s had lipo — the fluid that comes out of you is like yellowy with blood and like bits,” she continued, adding, “it smells so bad.”

Weronika explained that she’d had a drain removed from behind her ear post-operation, and assumed that’s where most fluids had accumulated after her surgery. “So, obviously, all of that must have not drained out, and when I got on the plane, it swelled up to the extent that the skin was pulling apart, and the nylon stitches couldn’t hold it anymore,” she said, hypothesizing that the cabin pressure and swelling forced her incisions to burst apart, and “all the fluid just gushed out all in one go.”

Weronika stuffed tissues into the compressive headwrap she had on to sop up the fluid and returned to her seat, where she told her boyfriend what had happened. Deciding to keep the compression wrap on and wait until they could view it post-flight, she waited. “I was in so much pain for the rest of the flight,” she said, “it felt so hot. All that liquid was draining into this tissue. It was honestly disgusting.”

Upon arriving home, she showered the dried blood off and sent photos to her surgeon, saying she was panicking about the hole in her head. Based on her doctor’s recommendations, she said, she left the wound alone and continued taking antibiotics. Unfortunately, she told viewers, the wound did end up getting infected. In the caption, she wrote that “it’s clearing up now, and it’s all good.”

Weronika, who runs a surgery prep and aftercare business called “Sculpted by Weronika,” which offers services such as stretch mark advice and a compression guide, told viewers she made the original TikTok to “inform people about the unpredictable complications after surgery.”

Some commenters suggested she might have a lawsuit on her hands.

“Sue who?” she asked viewers. “No one did anything wrong.” Weronika clarified that she was cleared to fly by both her doctor and airport medical staff and that no one was to blame: “Things happen.”

Weronika did not immediately respond to Insider’s request for comment.