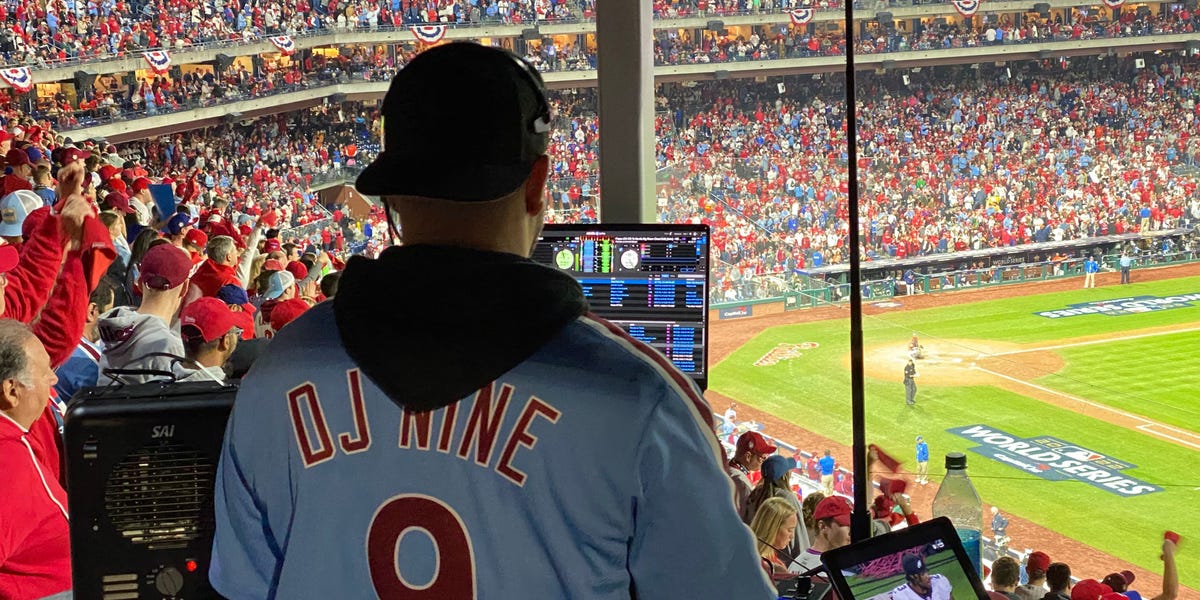 PHILADELPHIA — The Phillies’ unlikely run to the World Series has been fueled by big bats and good vibes.

This team hits homers, and after wins, celebrates by blasting a cover of Robyn’s “Dancing On My Own” through the streets of the City of Brotherly Love.

After winning their first playoff series against the Cardinals, the team’s locker room celebration was quickly embraced by fans on social media.

But for a team riding so high on vibes, having songs blasting in the postgame locker room is not enough.

Thankfully for the Phillies, they have a pair of DJs they can rely on to keep the mood high at home, from batting practice all the way through nine innings of baseball.

On Thursday night at Citizens Bank Park, DJ N9NE and DJ SCOOTER were working the turntables as the Phillies took batting practice. Both work as DJs for Philadelphia hip-hop station Q102, as well as working shows and nightlife venues around the city and country.

But this year, they took on a new task — DJing for the Philadelphia Phillies. Heading into the season, players were tired of going through their pregame routines with just another Spotify playlist blasting through the loudspeakers.

So they brought in some professionals.

“We play strictly for the players,” DJ N9NE told Insider during batting practice on Thursday. “They wanted us, which is why we’re here.”

The first task of the night is setting the right mood for the players before the game.

“Batting practice, it’s all player preferences,” DJ SCOOTER explained. “It’s always rotating. We talk to them during BP throughout the season. We’re always updating. Whatever is going to help them win, we’re down for it. It could be Earth, Wind, and Fire, it could be Lil Uzi Vert. Today it’s Uzi.”

While it’s clearly not the same type of gig as working a nightclub or an afterparty, some parts of DJing stay the same — see what gets the people moving.

“It was a guessing game early on,” DJ N9NE said. “Then we got to know the players a little bit. We see what they’re dancing to. That helps a lot.”

As players work through their routine, they’ll come up and make requests, with both DJs happy to oblige. Centerfielder Brandon Marsh is one of their most frequent visitors.

“I stick to one genre. I’m a hip-hop rat,” Marsh told Insider before Game 5. “There’s a lot of other guys that have more variety.”

Asked who had the best taste in music on the team, Marsh deferred. “[Kyle] Schwarber’s good. Gibby [Kyle Gibson], he’s great. Stubby [Garrett Stubbs] controls the mic a lot. Bohmer [Alec Bohm] does too. Everyone’s got good taste on this squad,” he said.

After batting practice, the duo packs up shop and heads to section 210 of Citizens Bank Park, located between third base and the right field pole.

The view gives them a solid view of the audience of more than 45,000 Phillies fans they’re in charge of keeping amped up. From up there, they play another set as the stadium goes from a smattering of fans surrounded by empty blue seats and slowly swells into a sea of red.

During this set, the music is noticeably more crowd-pleasing, giving fans who might not necessarily be deep hip-hop heads plenty to sing along with.

That said, the mixes are ambitious and fun — Dua Lipa’s “Levitating” was played over the backtrack of Sister Sledge’s “We Are Family,” before transitioning into ABBA’s “Dancing Queen,” which got plenty of people in the stands grooving.

When Whitney Houston’s vocals on “I Wanna Dance With Somebody,” were played over Rihanna’s “We Found Love,” multiple fans were dancing despite there being an hour and 17 minutes before the first pitch.

Across the stadium, their effort is appreciated.

“They’re good. It’s their first year here, and they bring a lot of energy to the stadium,” Corey, a security worker at Citizens Bank Park, said. “They’re going harder than usual tonight.”

Once the game finally begins, the DJs still aren’t done, charged with keeping the crowd going as the game broadcast goes to commercials. While in regular season, the music had to contend with many mid-game commercials and promotions inside the stadium, during the postseason, the intensity has turned up.

There’s far less “Follow the baseball under the cap” and “Which subway train will win the race?” games on the Jumbotron. Instead, the space is given to the music, to keep the crowd up.

“It’s a lot more on us to DJ,” DJ SCOOTER said of the postseason. “They take out a lot of the advertising, the commercials. They just want us to bring high-energy music.”

It’s a huge task, but for DJ SCOOTER, it’s a labor of love.

“I played baseball my whole life, and so it means a whole lot more than just a gig,” he said. “It’s one of the most special experiences of my DJing career, and I’ve been doing it a long time.”

As Calum Scott and Tiesto’s cover of “Dancing On My Own” became an anthem for the team, the DJs have started to use it in their sets outside the stadium as well.

“It’s given us, as DJs that play in the city at nightlife venues, a new anthem kind of like ‘Dreams and Nightmares’ was for the Eagles,” DJ SCOOTER says. “Now the Phillies have their own thing. It’s really made it special to be able to play that at any point in the night and have people in Philadelphia love it.”

Game 5 of the World Series was the last one to be played in Citizens Bank Park this year, but both DJ SCOOTER and DJ N9NE plan on being back for the 2023 season. With the team making such an unexpected run to the World Series in their first year playing for the club, the answer was easy.

“We’re in for next year. Already locked and loaded,” DJ N9NE said. “How could we not? I think we’re a good luck charm.”