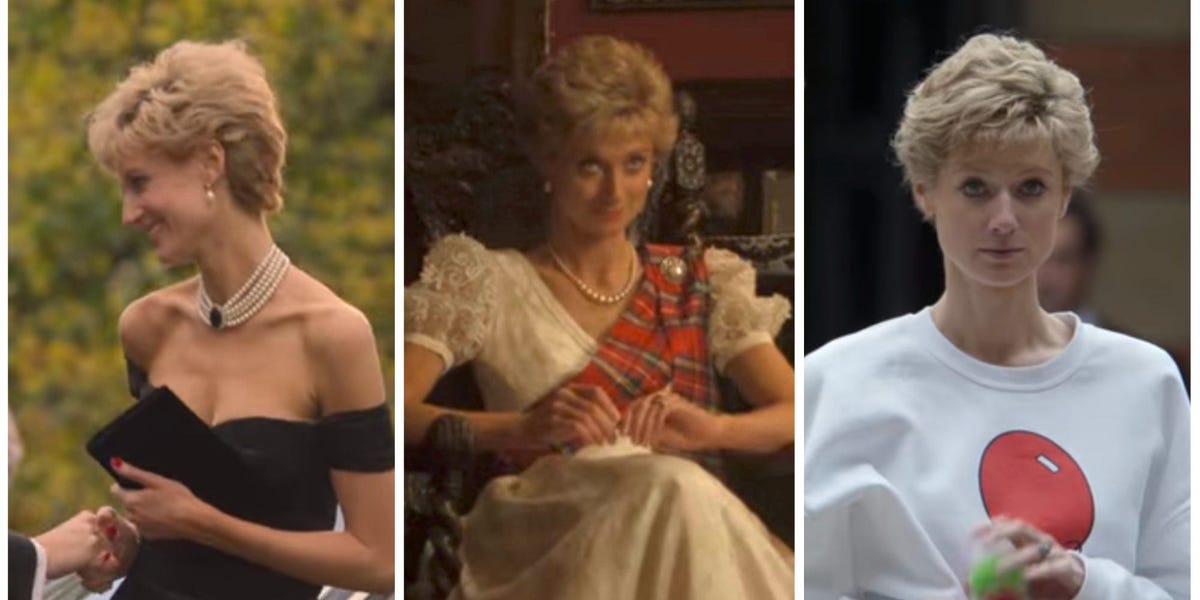 The first episode of "The Crown" shows Elizabeth Debicki in a floral print dress that's similar to a number of dresses Princess Diana wore in the 80s and 90s.

In the first episode of season five, which takes place in the summer of 1991, Charles (Dominic West) and Diana (Elizabeth Debicki) sail on a private yacht around Italy with their children and a group of family friends.

During the vacation, which the couple refer to as their "second honeymoon" in the episode, Debicki wears a floral print dress that's a similar style to many dresses Diana wore in real life during that time period. One outfit the series may have taken inspiration from was the blue floral dress Diana wore to a polo match in 1988.

Debicki stunned in a ball gown and tartan sash, which is strikingly similar to what Princess Diana wore at Balmoral Castle in real life.

While no photos of Diana attending the ball have been made public, there is a video of the princess at the ball on YouTube. In the clip, Diana can be seen wearing a white ball gown and tartan sash as she dances with the Queen and members of the royal family.

Debicki wears a Harvard sweatshirt in episode two, which is similar to one the princess famously wore leaving the gym in 1997.

In the series, the year is 1991 and Diana wears the Harvard sweatshirt while talking on the phone at her royal residence, Kensington Palace.

In real life, however, Diana was pictured wearing a Harvard sweatshirt while leaving a gym in west London in August 1997, according to Getty Images.

Also in the second episode, Debicki wears a red balloon sweater that Princess Diana wore to a polo match in 1988.

Debicki wears a British Lung Foundation sweater with a red balloon that appears identical to one Princess Diana wore to a polo match in 1988.

In real life, Diana styled the sweater with a black blazer, a baseball cap, boots, and hoop earrings. "The Crown" takes a more simple approach, as Debicki doesn't wear any accessories with the outfit.

In episode three, Debicki wears a lilac two-piece suit that resembles one Diana wore during a visit to Washington, DC, in 1997.

Diana styled the suit with a pearl necklace and a white Chanel handbag, according to the Daily Mail, which is also what Debicki was styled in while filming "The Crown."

Diana famously appeared at a royal engagement wearing what is now known as the "revenge dress" — an off-the-shoulder black gown by Christina Stambolian — on the same evening Charles admitted to having an affair in a TV documentary in 1994, The New York Times reports.

Debicki wears a replica of the dress in episode five, complete with a choker necklace similar to the one worn by Diana.

Debicki wore an oversized blazer and white shirt for a recreation of Princess Diana's "Panorama" interview in episode seven.

"The Crown" recreated Princess Diana's conversation with Martin Bashir in 1995, right down to the outfit she wore for the televised "Panorama" interview which aired on the BBC.

Diana famously spoke to Bashir about Charles and Camilla's affair, saying "there were three of us in the marriage, so it was a bit crowded."

Following the interview, Diana's brother, Charles Spencer, alleged Bashir showed Diana fake documents to persuade her to take part in the interview. As Insider reported, the BBC apologized in May 2021 after an inquiry showed "deceitful" tactics had been used to secure the interview.