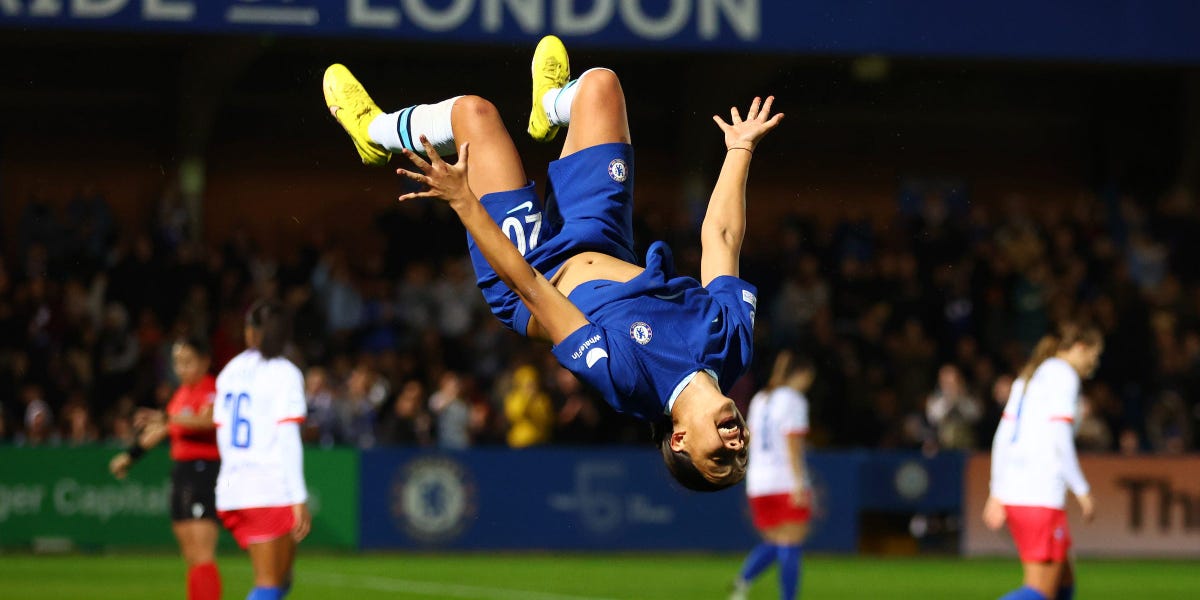 The sensational Australian striker — who already owns the all-time scoring record in America’s top women’s soccer league, the National Women’s Soccer League — has taken Europe by storm in her two years with The Blues. And her latest feat may be the most jaw-dropping yet.

In Chelsea’s Champions League group stage match on Wednesday, Albanian club KFF Vllaznia Shkodër had no answers for Kerr. She netted a whopping four goals in the team’s 8-0 win, and then celebrated the feat with her signature on-field backflip.

Kerr scored the first and second goals of the lopsided affair, both of which came off of clean looks from crosses into the box. The floodgates opened from there, with fellow international superstar Pernille Harder — who ended the night with a hat trick of her own — finding the back of the net just two minutes after Kerr secured her brace.

The 29-year-old didn’t let up in the second half; in the 57th minute, Chelsea’s Fran Kirby delivered a perfect corner kick into the six-yard box, where Kerr rose up and headed the ball past Vllaznia’s keeper to record a hat trick.

Then, a mere three minutes after that, she added one more for good measure. She used her left foot to bury another cross into the open net, then pulled off her high-flying hijinks.

Kerr’s four goals made her the first in UWCL history to score four or more goals in a group stage match. And only a handful of superstars — including Christiano Ronaldo, Robert Lewandowski, and Zlatan Ibrahimović — have ever pulled off the same feat on the men’s side.

Check out all four of her goals below:

Kerr and The Blues have several Barclays Women’s Super League matches to attend to in the coming weeks before playing their next Champions League game. On November 23, Real Madrid — quarterfinalists in 2021-22 — will head to Kingsmeadow to face Chelsea in a high-profile clash of titans.

Fans worldwide will be able to watch the entire match on YouTube via DAZN.