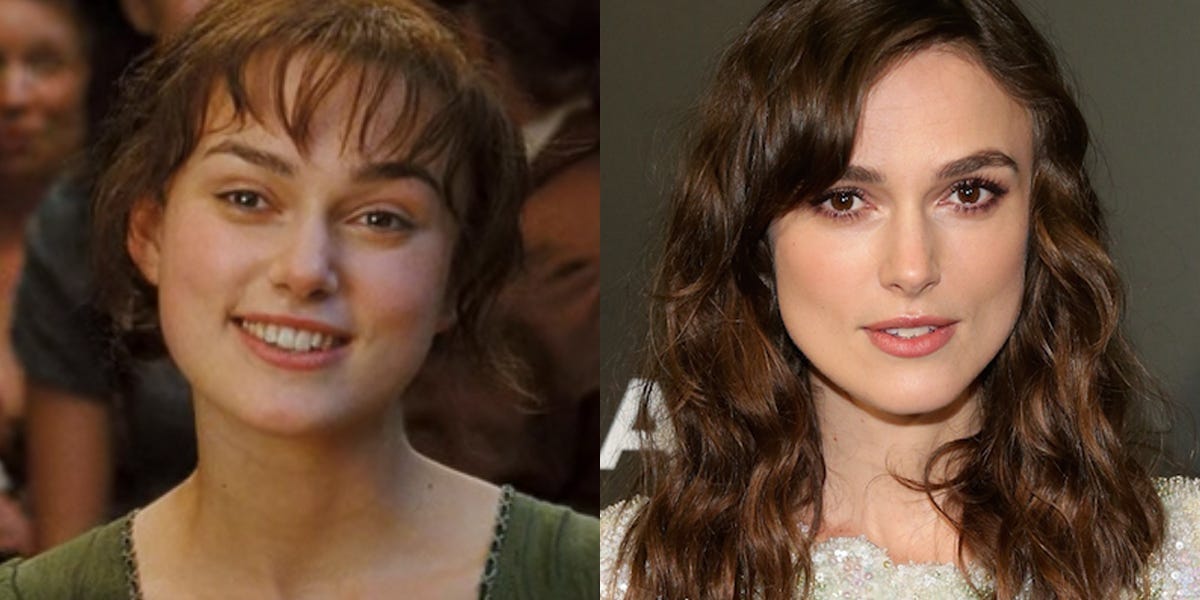 Knightley continues to act, primarily in film, and has been nominated for two Academy Awards.

After earning an Academy Award nomination for her performance in “Pride and Prejudice,” the actress continued her work in the “Pirates of the Caribbean” series as noblewoman-turned-pirate Elizabeth Swann.

In 2015, Knightley was nominated for another Academy Award for her performance in “The Imitation Game” (2014).

Her recent acting projects include the dramedy “Misbehaviour” (2020) and the holiday film “Silent Night” (2021).

Although Macfadyen had appeared in stage productions, on a handful of TV miniseries, and in several films before “Pride and Prejudice,” his portrayal of the classic Austen love interest Mr. Darcy brought him worldwide attention.

Macfadyen is currently on HBO’s “Succession.”

Not long after starring in “Pride and Prejudice,” Macfadyen appeared in a lineup of hit films, like the political drama “Frost/Nixon” (2008) and the dark comedy “Death at a Funeral” (2010).

He also was on BBC One-BBC Two’s show “Ripper Street,” among other projects.

In 2018, he gained fame for his supporting role as Tom Wambsgans on the critically acclaimed series “Succession.” He has continued his work on the show and, in 2022, he won the Emmy for outstanding supporting actor in a drama series

Prior to her role in “Pride and Prejudice” as Mr. Darcy’s controlling and judgmental aunt, acclaimed British actress Dench had made a name for herself in theater and film.

Her role in the James Bond film “Goldeneye” (1995) helped catapult her to international fame, further solidifying her status as one of Hollywood’s A-list actresses.

Dench continues to maintain her legacy by starring in theater productions and films.

After over 60 years in the business, Dench continues to work, starring in films and theatrical productions.

After appearing in “Pride and Prejudice,” she went on to earn Academy Award nominations for projects like “Notes on a Scandal” (2006) and “Philomena” (2013).

She also continued to appear in the “James Bond” franchise and in hit films like “The Best Exotic Marigold Hotel” (2012), “Miss Peregrine’s Home for Peculiar Children” (2016), and “Murder on the Orient Express” (2017).

In 2019, Dench starred as Old Deuteronomy in the film adaptation of the Andrew Lloyd Webber musical “Cats.”

On top of her busy schedule, Dench made history by appearing on the June 2020 issue of British Vogue, making her the oldest person to grace the cover of the magazine at 85 years old.

She recently appeared in “Belfast” (2021), and received an Academy Award nomination for her performance.

Before appearing in “Pride and Prejudice” as the scheming mother of five, the classically trained actress made her mark by joining the Royal National Theatre.

Blethyn continues to act in both film and television.

Following her performance as Mrs. Bennet, Blethyn appeared in the Australian comedy “Clubland” (2007) and joined her “Pride and Prejudice” costar Knightley in the period drama “Atonement.”

Blethyn transitioned to television after appearing on several miniseries like ABC’s “Anne Frank: The Whole Story” in 2001 and “War and Peace” in 2007.

She’s since worked on Disney’s animated series “Henry Hugglemonster” and on the ITV shows “Vera” and “Kate and Koji.”

Pike currently stars on multiple television series and was nominated for an Academy Award for her role in “Gone Girl” (2014).

Pike also starred alongside Ben Affleck in “Gone Girl,” and her performance as the vengeful wife Amy earned her an Academy Award nomination.

She has worked on multiple animated series and was nominated for a Primetime Emmy for her performance on the Sundance TV comedy series “State of the Union.” She also starred in the 2020 thriller “I Care a Lot.”

More recently, the actress portrayed Moiraine Damodred on Amazon Prime’s adaptation of  “The Wheel of Time” and did voiceover work for “Moominvalley.”

Riley was on HBO’s “Westworld.”

After playing Mary in “Pride and Prejudice,” Riley grew into her career as an actress by starring on the E4 miniseries “Nearly Famous” and in several films, including the comedies “St Trinian’s” (2009) and “The Boat That Rocked” (2009).

Fans may also recognize her from her appearance in “Inception” (2010).

More recently, she played Angela on the hit drama “Westworld” and appeared in the holiday comedy “Father Christmas Is Back” (2021) alongside Elizabeth Hurley and Kelsey Grammer.

Acclaimed Canadian actor Sutherland had established himself as a successful star long before he played the Bennet family patriarch.

Sutherland continues to add to his Hollywood legacy.

With a career that has spanned over 50 years, Sutherland has appeared in a variety of successful pictures after the 2005 hit.

He notably played the sorrowful grandfather in “Aurora Borealis” (2005) and President Snow in all four “Hunger Games” films.

In 2017, he received an honorary Academy Award to celebrate his vast achievement in Hollywood.

More recently, he appeared on HBO’s “The Undoing” and Roku Channel’s “Swimming With Sharks.”

Following her role in “Pride and Prejudice,” Mulligan starred in a handful of television series, but her breakthrough performance in the 2009 film “An Education” solidified her fame and earned her an Academy Award nomination.

In addition to dabbling in TV work, she continued to star in successful films like dystopian romance “Never Let Me Go” (2010), Baz Luhrmann’s film adaptation of “The Great Gatsby” (2013), dark comedy “Inside Llewyn Davis” (2013), and historical drama “Suffragette” (2015).

Malone continues to work in film and on television.

Dabbling in both mainstream and indie pictures, Malone has continued her successful career as an actress.

Some of her most notable projects since “Pride and Prejudice” include playing Johanna Mason in the “Hunger Games” series and appearing in films like “Into the Wild” (2007), “Sucker Punch” (2011), and “Nocturnal Animals” (2016).

Some of Malone’s more recent projects include her role as Diana on Amazon’s 2019 miniseries “Too Old to Die Young” and starring alongside Janelle Monáe in the 2020 horror film “Antebellum.”

She was recently in the movie “Swallowed” (2022) and has a few films in post-production.