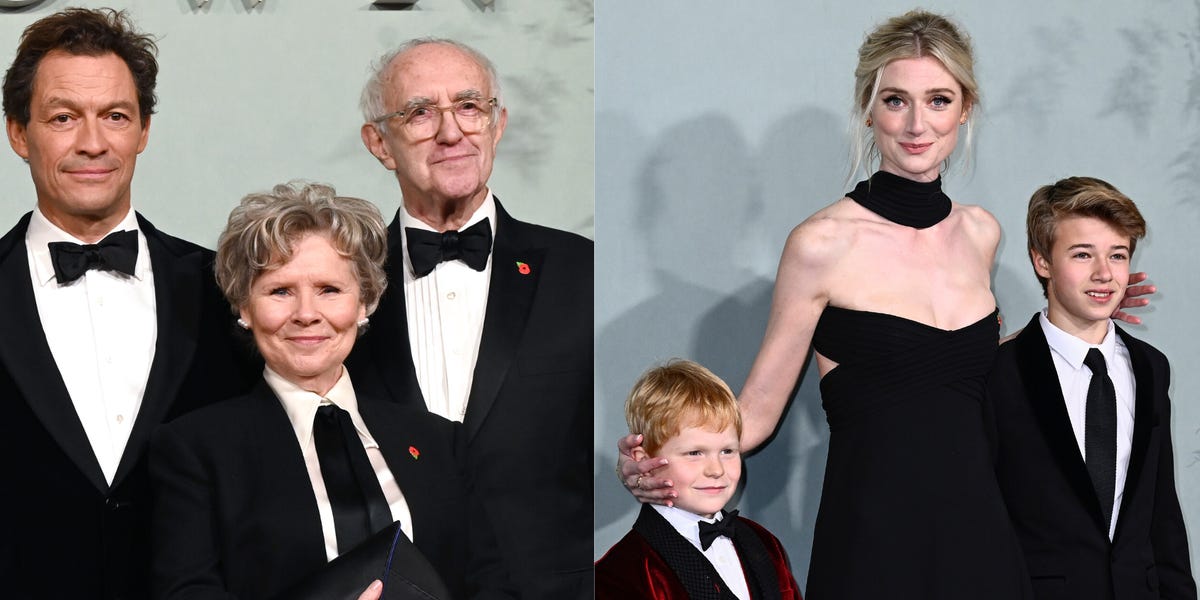 The stars of season five of Netflix's "The Crown" gathered at the Theatre Royal Drury Lane in London to celebrate the release of the new season.

Peter Morgan's latest installment of the historical drama picks up in the early 1990s and follows the royal family through a number of turbulent events, including the Windsor Castle fire, the separation of the Prince and Princess of Wales, and the breakdown of two other royal marriages.

Imelda Staunton cut a sharp figure in a velvet suit, complete with a matching tie.

The look was so far from the sort of outfits she is seen wearing in season five as she takes on the role of the Queen, who famously was only photographed in trousers a few times in her life.

Dominic West also opted for an opulent velvet tuxedo suit for the event.

It seems both wanted to bring a bit of royal touch to the night's proceedings in their choice of material.

It has also been speculated that the stars chose to mostly wear black as a nod of respect to the late Queen Elizabeth, who passed away on September 8 at the age of 96 and whose life the series is based on.

Elizabeth Debicki, who plays Princess Diana in the new season, wowed in black.

The actor cut a glamorous figure on the red carpet in a black sleeveless gown by Dior.

She was joined by her two young costars, Teddy Hawley, 7, and Timothee Sambor, 12.

Debicki posed beside her on-screen sons.

Debicki checked in on the two, who take on the roles of the young Princes Harry and William, as they posed for the cameras.

She comforted them and had her arms around the two of them as they posed together.

They were then seen smiling as Debicki leaned down to whisper some comforting words in their ears.

Both Hawley and Sambor make their acting debut in the new season and it's possible that the glamorous event was their first experience of being on a red carpet.

If you're wondering why the actor is shown leaning down so much when talking to her costars, it's because she stands at an impressive 6 foot, 3 inches.

Staunton was seen with her on-screen husband, Jonathan Pryce.

Pryce takes over as Prince Philip in seasons five and six.

West was joined by his whole family for the event, but had a special reason to pose with his eldest son, Senan.

Senan makes his acting debut as a teenage Prince William in the latter half of the new season.

Olivia Williams, who plays Camilla Parker Bowles in the new season, also made an appearance.

The actor stood out from the crowd in a red double-breasted suit with feathering.

She takes over the role of Princess Margaret from her predecessor Helena Bonham Carter.

Prasanna Puwanaraj, who plays journalist Martin Bashir in the new episodes, also posed for the cameras.

Puwanaraj has a significant storyline in the new season, as it dramatizes how Bashir landed the infamous 1995 Panorama interview with Diana.

Khalid Abdalla and Salim Daw, who play Dodi and Mohammed Al-Fayed, posed together on the red carpet.

How the lives of the Al-Fayeds and the royal family first crossed paths is also explored in the new episodes.

Gillian Anderson, who portrayed Margaret Thatcher in season four, also came out to support the event.

Although she does not appear in the new episodes, Anderson walked the red carpet in a black sleeveless gown.

Marica Warren, who plays the Queen Mother, also came out for the event.

She accessorized her red carpet look with a crown-shaped clutch.