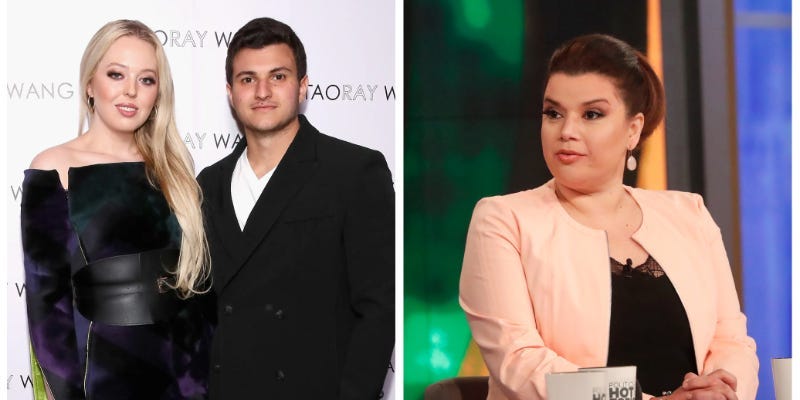 Tiffany Trump’s wedding to businessman Michael Boulos on November 12 was a hot topic on Monday’s episode of “The View.”

The lavish affair, hosted by former president Donald Trump at his Mar-a-Lago resort in Palm Beach, Florida, took place days after the GOP’s “red wave” failed to materialize in the midterm elections.

“The View” co-hosts Alyssa Farah Griffin, Ana Navarro, Sunny Hostin, and Sara Haines began by discussing how Ivanka Trump had cropped Donald Trump Jr.’s fiancée Kimberly Guilfoyle out of photos from the wedding in an Instagram post (though she later included the full photo with Guilfoyle in her Instagram story).

Griffin, a former Trump White House aide, suggested that Guilfoyle’s black dress may have been the issue when surrounded by lighter shades of blue and silver worn by other family members.

“I stand with Ivanka on this. Kimberly didn’t understand the assignment,” she said. “It’s a Florida wedding in November. All the women clearly knew what the palette was, what the look was, and she was dressed like she was going to a MAGA funeral or something. I’m gonna be honest, I probably would have cropped her too.”

Navarro, a political strategist, added: “Maybe it’s completely the opposite. Maybe she did get the assignment because it was a MAGA funeral,” to uproarious applause.

Republican analysts, including Griffin, are blaming Trump for the party’s disappointing performance in the midterms. In a CNN interview, Griffin blamed the failures on the poor quality of the candidates Trump championed.

“Are they going to continue to nominate poor-quality candidates to appease Donald Trump?” she said of Republicans.