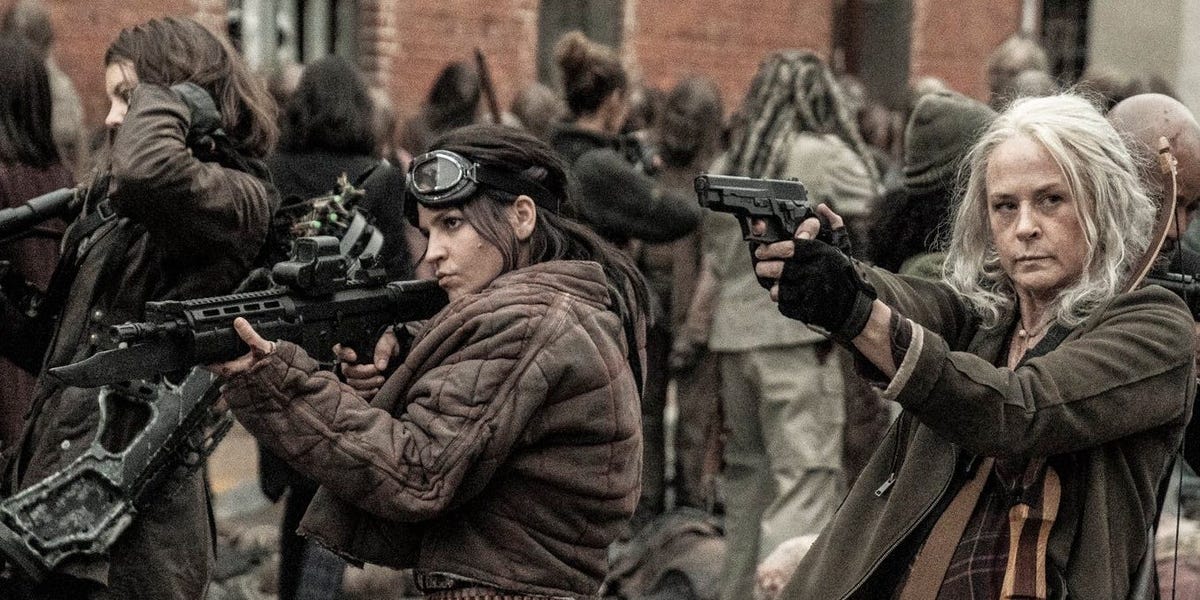 AMC released over 30 teaser photos for its upcoming series finale of “The Walking Dead.” At least three of them, including a now-deleted image from the network’s press site, appear to spoil two big reveals from the show’s final episode.

Warning: There may be potential spoilers ahead.

Among the many teaser photos are two of Judith Grimes (Cailey Fleming) appearing alive and well.

That’s a pretty shocking reveal since the series’ penultimate episode ended on a cliffhanger with Judith shot and Daryl racing through zombie-filled streets to get her medical attention.

However, these images could be a clever misdirection on AMC’s part.

Perhaps she’ll have an out-of-body experience on the finale, much like her father, Rick, did on his final episode of the series.

The third photo has the biggest potential spoiler.

At first glance, it looks like a normal photo of Maggie (Lauren Cohan), Carol (Melissa McBride), and Princess (Paola Lázaro).

But fans were quick to spot online that it appeared to give away a character’s death. If you look closely, it appears that Luke (Dan Fogler) is on the ground.

The photo has since been removed from AMC’s press site, but not before fans could start sharing it online.

Fan account @TWalkingDWorld threaded all of the photos on Twitter before it was pulled from the site.

Fans expressed their disappointment and disbelief that it looks like the network may have spoiled a character’s death nearly a week ahead of the show’s finale.

Maybe Luke’s just injured, but it seems pretty telling that the photo is no longer available for download.

It wouldn’t be the first time AMC spoiled a major reveal in press photos. Earlier during season 11, Insider spotted a character reveal episodes early because of photo captions labeling someone as “Decoy Stephanie.”

“TWD” finale will air Sunday at 9 p.m. ET on AMC. It will stream simultaneously on AMC+.

You can follow along with more of our “TWD” coverage here.