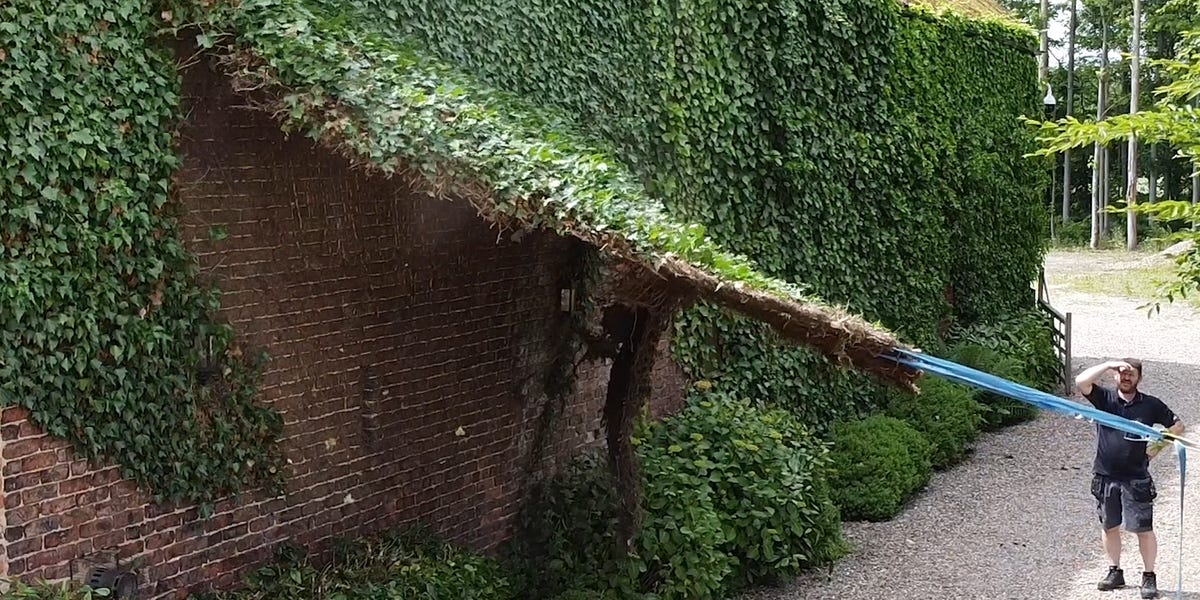 Following is a transcript of the video.

– I’m Andy, and I work for Renovate Innovate. And today we’re going to be seeing some ivy removal.

When we’re first seeing it here, it’s covered in ivy. It’s English ivy. We guessed by the age of the property that the ivy was going to be intrusive into the building. We went inside, and we could see it was growing through cracks in the bricks and cracks in the doorway. So, yeah, we knew that it had to come off.

It grows, I think, up to a meter in a year. About 5 meters up, I’m guessing, something. But it’d been growing for years and years to spread like that.

We started to remove the ivy from around the CCTV cameras and the lights first, because as we pulled the ivy, the ivy could have been stuck to the cables. We didn’t know if there were any cables there or not. So we had to cut through the roots. They were quite thick. They were a couple of inches thick. Reason for that, we didn’t want to cause any damage to the foundations of the property.

We’re cutting around all the lights and the windows so that when we do pull this off with the machine, it’s not pulling on any electrical cable. So we assessed for electricity cables or any other utilities that were there and made sure we cleared all the ivy around that.

We used a reciprocating saw. The blade reciprocates, goes backwards and forwards, and it has a lot of teeth, big teeth and that. And that’s great for cutting through the roots. We also used an ax in there as well, just to try and break the roots. We had to get that digger attached to the ivy and pull it off as much as we can. We knew it might cause damage. So the smaller tools were just in preparation for us to clear a space.

The digger’s moving really slowly as it pulls. It took the strain on the straps. Oh, the ivy was heavy. I’m going to suggest hundreds of kilos from that whole side of the house. We knew that what we’d have to do is pull from as close to the roots as possible. So we knew we had to get these straps around the bottom of the ivy.

How ivy grows on walls? Well, it has very shallow roots. So it roots very easily, and it likes to spread out, but it also likes to climb. It has sticky roots, and the roots stick to everywhere. And as it grows, it continues to stick to whatever it grows to.

It’s classed as an invasive plant. So it can kill off other plants that are around and other trees, but not so much invasive on properties. Unless you’ve got an old property where then it can just, it can attack weak mortar.

The house likes to breathe, as they say. The brick soaks up the water from the rain, and then it releases it slowly. And the ivy being in the way, it’ll stop that from happening. So it’ll keep any moisture from the rain trapped into the building and won’t let it out. So, yeah, more likely to get damp issues if you’ve got a lot of ivy. Especially on an older property.

The blowtorch was just for removing the residue of the tendrils of the roots from the brick. The wire brush just really takes off those last little bits of residue that are on there.

In this case, the customer is getting all this media blasted. If you were to do it yourself, especially on this, go and get yourself a bigger torch. It’s a great way to get off all those little tiny little bits that are left, stuck on the bricks.

And the final results, I think, speak for themselves. Looks fantastic. It shocked us all, how clean it came off and how well it looked. Yeah, we were really happy. And we were glad we didn’t have to sit there for hours with a little scraper, scraping it off. Yeah, yeah. It looks great.