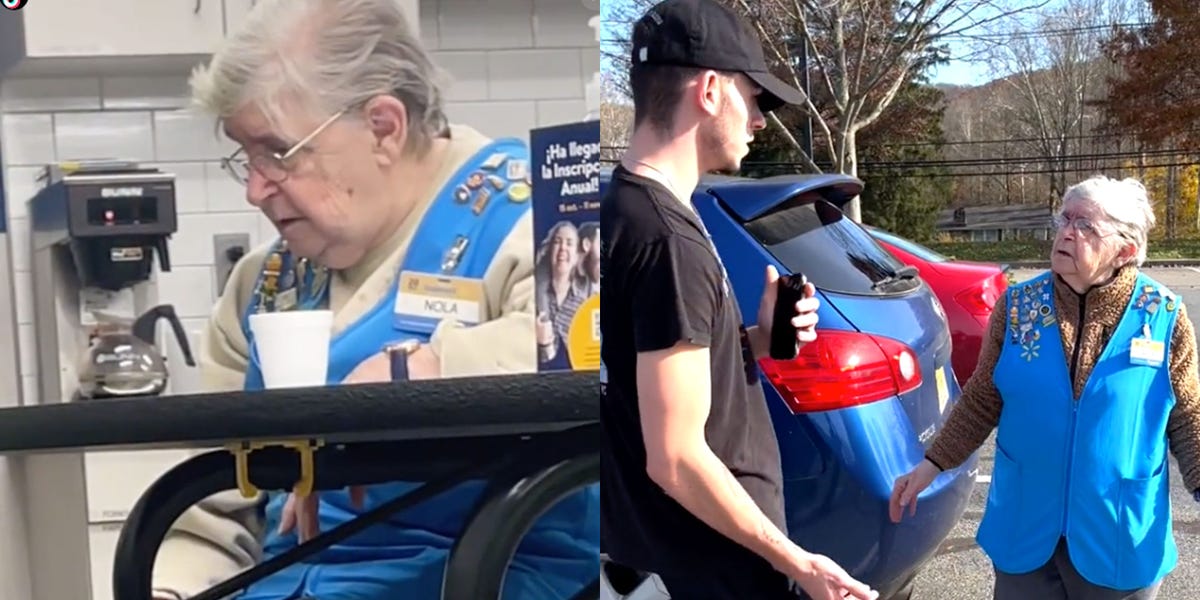 TikToker Dbon973_ — real name Devan Bonagura — recently posted a November 3 TikTok of a Walmart worker, identified by her nametag as Nola, as she sat alone in the Walmart break room. (Bonagura later said he didn’t work at Walmart but for a third-party company that sells products at the retailer). “Life shouldn’t be this hard,” he wrote in text over the video, which has since been viewed more than 24.1 million times on the app.

In response to encouragement from commenters, Bonagura set up a GoFundMe the same day for the worker. In 24 hours, it had raised over $100,000.

He also posted a video of himself on November 5 meeting up with Nola to transfer the account over to her shortly after.

“They saw that you’re a very hard worker, obviously,” he told the woman. “We are all super proud of you, and we wanted to offer you the $110,000 that has been raised for you.”

“I’d accept it, but I’d still have to work until I get the other $60,000 paid off the house,” she told him, seemingly nonplussed at the donations raised. She agreed that the sum would help, noting that the mortgage would “go way down” and it wouldn’t “take long now” to save up the remaining amount.

Walmart’s average wage is $19 for hourly workers, and saving $60,000 would likely require Nola to work several additional years. If she were working 40 hours a week, she’d be making $39,520 a year before taxes and day-to-day expenses like food and transportation factored in.

At the time of writing, the GoFundMe is now at $168,800, close to the grand total Nola estimated she needed to retire, which she said she planned to do “as soon as I get it. That’s what’s holding me at work — the house.”

Retirement is not a given for millions of US workers. According to a September 2021 Boston College study, 36% of older Americans don’t have the savings to take care of themselves for even a year. A single elderly person with a mortgage and in good health in New Jersey, where the Bonagura appears to live, would need $43,788 per year on average to afford retirement, according to the University of Massachusetts-Boston Elder Index.

According to Bonagura, Walmart told him they were receiving threats because of his videos.

“They’re getting a lot of backlash, so they told me I need to delete the video and delete the GoFundMe and return all the money to the people that donated it or they’re going to get the cops involved,” he said in a November 4 video. “So, I told them to do what you have to do because I’m getting this money to this woman one way or another.”

In a separate November 5 video, Bonagura told viewers his employer had suspended him with pay. He did not immediately respond to Insider’s request for comment.

Walmart did not immediately respond to Insider’s request for comment.

Bonagura has posted additional philanthropic content — including a video where he tips a waitress $500 for a cup of water — to his 132K followers after Nola’s video, but the TikToker’s acts of charity are on a relatively smaller scale when compared to major online creators. Mr. Beast (who Bonagura tagged in other videos) grew a massive 110 million following for filming gameshow-like money giveaways and philanthropic acts in which he gave away millions of dollars.

But, critics say filming people experiencing poverty and benefit ting from “acts of kindness” can dehumanize the subjects by focusing solely on their perceived pain and, while useful in the short-term for collecting funds, oversimplifies the root causes of the societal ills they depict.

Email tips on all things internet to [email protected].