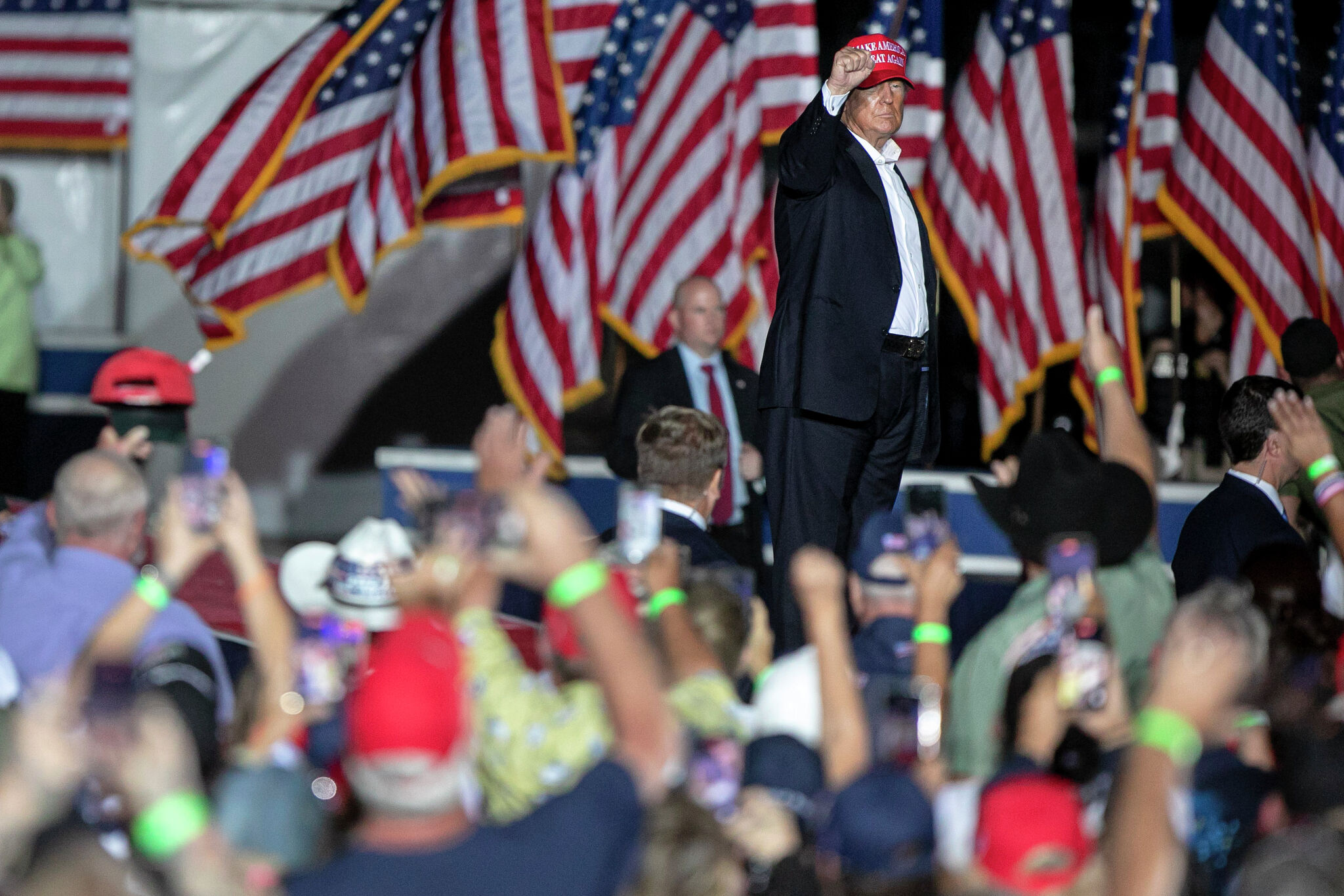 ROBSTOWN — Former president Donald Trump hammered away at Beto O’Rourke and predicted Texas is “not going blue” during a wide-ranging speech before a packed crowd of supporters just outside Corpus Christi on Saturday evening.

Texas Republicans are hoping Trump’s visit will fire up their large base of conservative voters ahead of the November midterms, when Democrats are trying to overcome rough national conditions to unseat Abbott and other statewide Republicans, including Lt. Gov. Dan Patrick and Attorney General Ken Paxton.

During his speech, Trump repeatedly singled out Paxton, one of the most dependable supporters of Trump’s false claims that rampant voter fraud cost him the 2020 presidential election.

“Ken Paxton shouldn’t even have a race. He’s done such a good job,” Trump said. “I would have been proud to have him in the White House.”

Abbott, Patrick and Paxton have consistently led their Democratic foes in statewide polls, while Democrats are banking on massive turnout they believe is not being fully captured by pollsters. Trump mentioned each of the GOP trio’s opponents by name, labeling Patrick’s Democratic challenger, Mike Collier, a “Biden-loving radical Democrat” and calling Paxton’s opponent, Rochelle Garza, an “ultra-leftist.”

Paxton is generally considered the most vulnerable of the three, as he faces a long-running indictment for felony securities fraud charges, along with an FBI investigation into claims by former top aides that he took bribes and abused the power of his office to benefit a friend and campaign donor.

“I know he’s a little controversial, but he’s tough,” Trump said of Paxton, before adding, “They know it already, Ken, they know it!”

While Abbott skipped the event for a “pre-planned fundraising trip to Florida,” Patrick and Paxton spent several hours at the rally, delivering their own speeches in the afternoon before Trump invited them back onstage during his evening address. Patrick urged the crowd to support GOP candidates up and down the ballot, singling out a handful of local Republicans in the Corpus Christi area.

Among the Patrick-promoted candidates was Adam Hinojosa, the GOP nominee in an open race for the state Senate seat held by retiring Democrat Eddie Lucio, Jr. As lieutenant governor, Patrick presides over the 31-member Senate, where he is hoping to expand Republicans’ current 18-13 advantage. Hinojosa later was endorsed onstage by Trump, who said his endorsement was “approved by Dan Patrick.”

MORE ON THAT: Trump reveals Lt. Gov. Dan Patrick is his pipeline to Texas politics

Patrick also predicted there would be few midterm voters who split their tickets by supporting a mix of Democratic and Republican statewide candidates.

‘Belly of the beast’

While Trump’s visit could rev up Republican turnout, some GOP strategists said the former president’s visit could also fire up Democrats, who are eager to make the election more about Trump than President Joe Biden, whose approval ratings continue to lag in Texas.

Trump showed no sign of moderating his tone, however, spending a large portion of his speech attacking Biden’s immigration policies and, at one point, calling his former Democratic foe “cognitively impaired.” He also repeatedly took aim at the “crooked people” on the House committee investigating the Jan. 6 attack on the U.S. Capitol.

The panel issued a subpoena to the former president on Friday, demanding that he testify either in person or by videoconference, and hand over an array of documents and records, including personal communications.

Trump’s first visit to Nueces County came under much different circumstances, when the then-president traveled to Rockport and other areas slammed by Hurricane Harvey following the 2017 storm. That was the first of 18 times Trump would visit Texas during his presidency, followed by another eight since he left office in January 2021.

He last visited the state in May for the NRA’s annual meeting in Houston.

Nueces County has flipped between Democratic and Republican control the last few elections and is up for grabs again this year. Trump narrowly carried the county in 2016 and 2020, while Democrat Beto O’Rourke won it in his 2018 Senate run against Republican U.S. Sen. Ted Cruz.

Bianca Gracia, a Robstown native and president of the Latinos for Trump group, said Trump’s rally here was, by far, the biggest Republican campaign event she had seen in her hometown — a suburb of Corpus Christi home to about 11,000 residents.

“We’ve never had anything like this here, ever,” Gracia said. “It’s amazing to see all the Latinos and Hispanics, Tejanos, out here. This is what it’s about. When you go and do outreach and engagement — and that’s what President Trump understands — you’ve got to go to the belly of the beast and you talk to people about hope and faith.”

Saturday’s rally, held at the Richard M. Borchard Regional Fairgrounds, took place about 20 miles from the edge of two South Texas congressional districts being targeted by Republicans, who are bullish on their chances of competing in historically Democratic South Texas.

Midway through the rally, Trump singled out the Republican nominees in the two nearby districts: Monica De La Cruz, who is running against Democrat Michelle Vallejo in Texas’ 15th Congressional District, and U.S. Rep. Mayra Flores, who is trying to keep the 34th Congressional District under Republican control after she flipped it in a special election earlier this year.

Trump touted the gains made by Republicans in South Texas in 2020, when he was the first Republican presidential nominee to carry Zapata County since Warren G. Harding did it 100 years ago.

“Hispanic Americans are joining our movement by the millions,” Trump said. ““These are hard-working people. And you know what they want? They want security.”

Republicans are most optimistic about De La Cruz’s race, though they are also setting their sights on a third district: Texas’ 28th Congressional District, where U.S. Rep. Henry Cuellar, a moderate Democrat, is facing Republican Cassy Garcia. (Trump also gave Garcia a shoutout during his speech.)

But the 15th district is far more favorable for Republicans, after the GOP-controlled Legislature redrew its boundaries last year in the hopes of electing a Republican. Anchored in Hidalgo County, the district stretches from McAllen all the way north to Guadalupe and Wilson counties, cutting through a long sliver of mostly rural Texas.