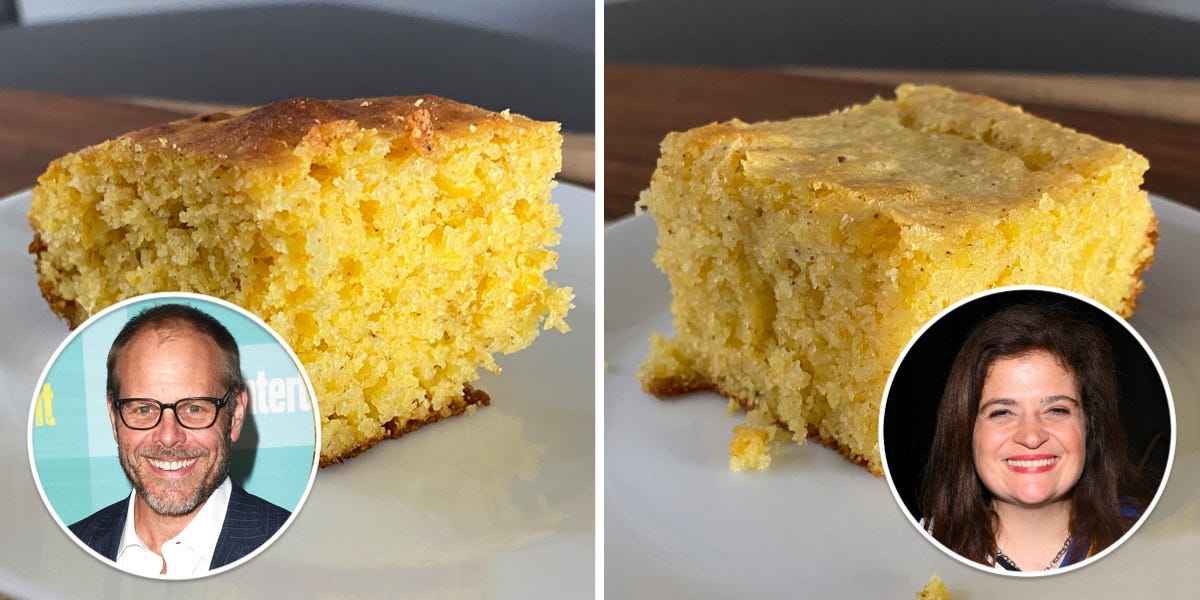 Cornbread is a fairly simple staple to make at home — and if you’re tired of grabbing the premade mix at the store, you can rely on a celebrity-chef recipe to help you prepare the delicious side dish from scratch.

It calls for just seven ingredients, and you can either make your own creamed corn or use a canned alternative, which is the option I chose to save a bit of time and money.

My skillet didn’t seem to get hot enough, but I hoped for the best

The process for making this cornbread was very easy. I mixed the dry and wet ingredients in different bowls, then combined them to create a thick batter.

While preparing the batter, I heated a cast-iron skillet in the oven. Once the oven was to temperature, I removed the pan and added canola oil, then I poured in the batter.

The recipe explains that the batter should sizzle in the oil when it’s first poured — mine did not. I think I forgot to test if the oil was hot enough first.

The oil pooled around the top of the cornbread, but I hoped it would still turn out OK.

This cornbread was fluffy and delicious

After about 25 minutes in the oven, I could smell the cornbread and I was excited to dig in.

The top was much more golden than any of the other recipes I tested and had some cracking in the spots where oil had pooled. The bread also gained a lot of height while baking.

The flavor was incredible — despite there being no butter in this recipe, the cornbread was buttery and the flavor of the sweet corn really came through. The texture was soft and fluffy.

I enjoyed everything about this recipe: the easy-to-follow instructions, the texture, the flavor, and the versatility.

Although the bread is on the savory side, it would go great with honey, butter, or my favorite chili.

Yearwood, by far, has the simplest of all of the recipes.

Of the three ingredients it requires, one is self-rising cornmeal mix. I couldn’t find this at my neighborhood grocery store, but a quick online search told me to add about 1 teaspoon of baking powder for each cup of cornmeal to make my own self-rising base.

The recipe also calls for corn oil or bacon drippings. I don’t eat bacon, so I opted for the first option.

The recipe came together in no time

The batter was as simple as mixing everything together in one bowl.

The recipe calls for 2 to 3 cups of buttermilk and says the consistency should be quite thick but still easily pourable — my only challenge was trying to strike that right balance.

I used 2 1/2 cups of buttermilk and it looked slightly too thin in the bowl.

But when I poured it into the hot cast-iron skillet, I quickly realized it was too thick … but it was also too late to do anything about it since the batter was already sizzling in the pan.

I cooked the cornbread batter on the stove for about a minute before transferring it into the oven for 22 more minutes.

As it turns out, looks can be deceiving

When I pulled it out of the oven, this cornbread looked and smelled delicious.

The top was slightly golden with a few darker brown areas and slightly crisp edges. But when I took a bite, I was underwhelmed.

This cornbread turned out dry and dense, and it tasted like eating plain cornmeal.

I checked the recipe reviews to pinpoint where I went wrong, but overall, many people who tried this recipe thought it needed eggs to improve the texture. I thought a bit of sugar might also help the flavor.

Guarnaschelli’s cornbread calls for butter instead of oil

Almost every recipe I tested called for oil, but Guarnaschelli’s cornbread required butter.

I was nervous about the swap because butter has a lower smoking point than oil, and I definitely didn’t want to end up with burnt cornbread.

Aside from the potential butter debacle, I also couldn’t find the coarsely ground cornmeal this recipe asked for at the grocery store, so I used regular yellow cornmeal.

Although I didn’t burn the cornbread, I nearly burned myself with the butter

Like the other recipes, this one was very simple overall. Leaving 1 tablespoon of melted butter on the side, I whisked the dry ingredients in one bowl and the wet ones in another, then combined.

The mixture was slightly thick and poured easily.

The biggest issue, however, was how the butter started aggressively popping and sizzling when I poured it into the cast-iron skillet that I had heated in the oven.

I had to work quickly and keep my distance to avoid being scaled by the splattering butter.

Following the recipe, I then lowered the oven’s temperature to 375 degrees Fahrenheit and baked the cornbread for 25 minutes.

Unsurprisingly, this cornbread was super buttery

The cornbread came out with a golden top, and the bottom was browned and crispy without being burnt.

The texture was spongy and soft, and the center was as buttery as it tasted. This wasn’t surprising considering the recipe required an entire stick of butter.

With a little honey on top, this cornbread would be a complete knockout.

Brown is well-known for his interest and knowledge in the science of cooking. His recipes can sometimes be complex, but his cornbread recipe was surprisingly simple.

This was another easy recipe to make

To make Brown’s cornbread, I mixed the dry and wet ingredients separately, then poured the dry mixture into the wet one to combine.

After I warmed the skillet in the preheating oven, I carefully swirled canola oil in the pan, then poured in the batter, which immediately sizzled. I put it in the oven for about 23 minutes.

As with all of the recipes, I didn’t turn the pan at all while it baked. For most of the recipes, that didn’t matter, but for this one, I definitely noticed that one side became more golden than the other.

Aside from the uneven coloring on top, the cornbread looked great. The bottom was evenly browned but not burnt, and the texture was fluffy and pillowy but held together well thanks to the slightly crispy bottom.

I tasted more savory notes from the cornmeal that complemented the sweetness of the creamed corn and sugar.

Fuller’s recipe spices things up with a bit of jalapeno

I loved that Fuller’s recipe added jalapeno to the mix. In total, it asked for 10 ingredients, including frozen corn and a lot of sour cream.

A food processor was my best friend for this recipe

Without a food processor, this recipe would probably be tricky — but with one, making this batter was easy.

I blended the corn and eggs together, added in the rest of the ingredients (minus the butter and jalapeno), and warmed the butter in the cast-iron skillet.

Once the butter had melted, I carefully poured it into the batter and folded in the chopped jalapeno.

Although there were more steps in this recipe than the others, it was still a simple process. I cooked the cornbread in the oven for about 25 minutes.

The cornbread didn’t get quite as golden on top as I would have liked, but it did smell good coming out of the oven.

Fuller’s recipe turned out excellent. It was a little dense, but it was still soft and moist.

There was a pretty strong corn flavor, but the jalapeno added a nice contrast and just a slight amount of heat.

I’d pair this cornbread with a little bit of butter and a generous drizzle of hot honey for an added kick.

I’d make nearly all of these recipes again

It was hard to choose a favorite because all of the recipes were quick and easy, and most of them nailed both texture and flavor.

Just by the slightest margin, I’d say Hall’s cornbread took the cake for me. The texture was so fluffy, and it had a picturesque golden crust and slightly savory flavor that could be dressed in honey, butter, or that last bit of soup or chili.

For me, Yearwood’s recipe was just OK — it needed something else to help soften the texture and give it a little more flavor. Aside from that one, I would happily make the other recipes again.

Click to check out the other celebrity-chef recipes we’ve put head-to-head so far.