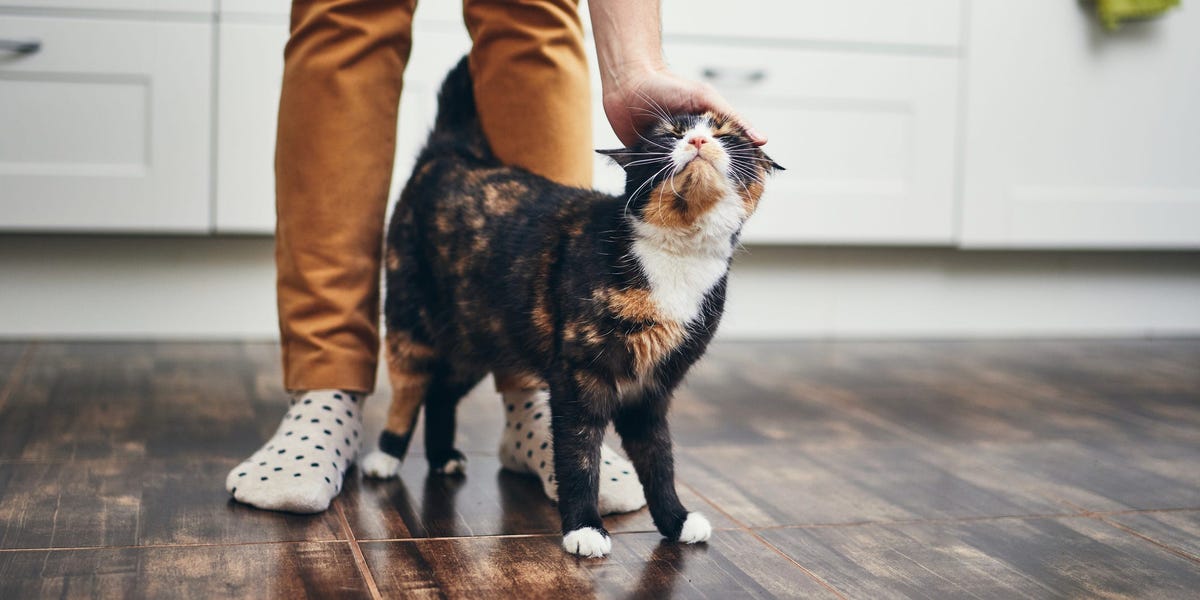 Cat body language can be tough to read. Some days, you might swear your cat is saying “I love you” when they head-butt, or “bunt,” your hand. Other days, it may seem like they’re trying to trip you by weaving between your legs.

But your cat rubbing against you could mean a number of different things — and it usually comes down to their pheromones.

Pheromones are chemical messages only members of the same species can understand. Humans can’t smell cat pheromones, and neither can dogs. So, when your kitty rubs against something, they’re depositing these pheromones and delivering cat-specific messages like “This is my territory,” or “I’m looking for a mate.”

Below, you’ll find an in-depth exploration of the driving forces behind this adorable cat behavior that might just help you better understand your feline friend.

Why your cat rubs against you

Cats have five unique pheromones. While researchers don’t understand the purposes of all of them, three main pheromones and their functions include:

More specifically, your cat may share their pheromones by rubbing you because:

1. They consider you part of their group

Feral cats often live together in social groups called colonies. When two cats belong to the same colony, they’ll rub against each to share their F4 pheromones and create one mega “group scent.”

Pet cats do this, too: If you have more than one cat, you may have seen this behavior when they rub or head-bunt each other — and taken plenty of cute photos as evidence.

“We don’t really see cats bunting up against other cats they have a hostile relationship with, so it’s not a huge stretch to assume cats are treating us as they would other cats that they like,” says Joey Lusvarti, cat behavior consultant at Class Act Cats.

In other words, your cat’s head-bunting could mean something like, “You’re part of the pride, human.”

Note: Cats only deposit the pheromone F4 when they feel calm and safe. One study found that cats acted calmer when their owners were in the room. So when your cat rubs their cheeks against your hand or legs, this may mean they feel safe with you around.

When you get home from work or school, your feline friend may rush to the door to greet you. You’re not alone there — 83% of cats like to rub against their owners following a separation.

This could partly relate to the fact that your cat’s pheromones don’t last forever — they can wear off as you go about your day. So, rubbing their face against you when you come home helps your cat re-mark you with the familiar colony scent so you still smell like part of the group.

Additionally, when your cat rubs against you, they take in the scents you have on your clothes and body.

These scents let them know where you’ve been and what you’ve been up to that day,” says Dr. Chryrle Bonk, veterinarian at Excited Cats.

So yes, your cat might know when you’ve spent some time hanging out with another cat or even (gasp) a dog.

Note: Cats also like to touch noses as a greeting. When your cat nose-nuzzles you, it could mean, “Welcome home, human.”

You might have trained your cat to rub against you without even realizing it.

“Cats are constantly learning what gets them what they want,” Lusvardi says.

Your response to your cat’s rubbing might train them to associate it with something they want — like food, pets, or going outside.

Female cats can change their behavior when they go through heat — often by acting more frisky.

“They can rub against you much more than usual, be more vocal, and sometimes lift their tail a little too close to your face while rubbing on you,” Finn says.

While spayed cats don’t experience heat, if your intact female cat suddenly amps up her affectionate rubbing, that could mean she’s entered her heat cycle.

Note: Female cats can start having heat cycles as early as four months old. After that, they have them every few weeks, usually between January and late fall. Vets recommend keeping intact female cats indoors and away from intact male cats to avoid unwanted pregnancies.

You can temporarily suppress your cat’s heat cycles through medication — but spaying your cat will stop these cycles altogether and remove all chances of pregnancy.

Is your cat rubbing against you ever a cause for concern?

Most of the time, rubbing is typical cat behavior, though some cats may do it a little more often than others. However, when your cat won’t stop rubbing or trying to catch your attention, that may indicate that something is off — especially if it comes in combination with a new behavior.

“Any behavior change in cats, especially if it’s sudden, could be a cause for concern,” Lusvarti says.

For example, if your cat likes to bunt you when hungry, and you notice they’re bunting more often than usual, that could mean they have an increased appetite for some reason.

According to Bonk, cat behavior to pay attention to includes:

If your cat suddenly starts rubbing more, combined with another unusual behavior, it may be worth scheduling a check-up with your vet.

Cats communicate through their pheromones, a scent-based, cat-exclusive language. When your cat rubs against you, they’re sharing their pheromones with you — a high honor in the cat world.

According to Bonk, this rubbing typically happens as a sign of affection. “Cats are only going to rub on someone they’re comfortable with and want to claim as part of their group,” Bonk says.

In other words, when your cat weaves between your legs, they’re probably not trying to make you fall down the stairs. They most likely view you as a part of their trusted inner group — and want to make sure you smell like it. Tripping is just one of the prices you pay for kitty love.