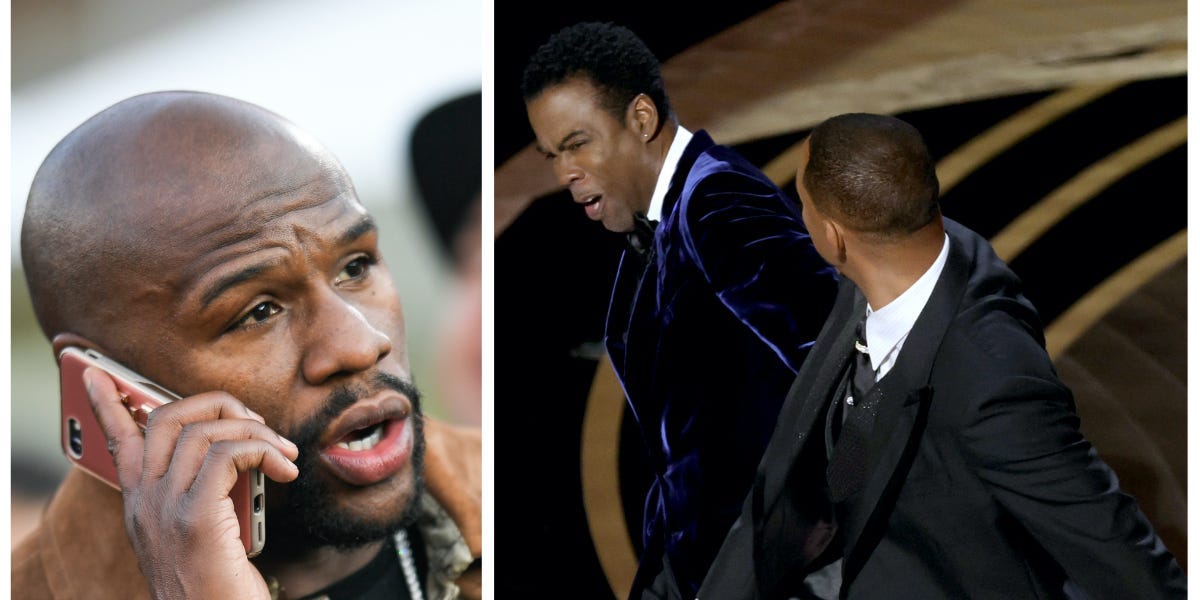 Will Smith said Floyd Mayweather called him every day for 10 days straight in the aftermath of Smith’s now-infamous slap of Chris Rock at the Oscars in March 2022.

While presenting an award for best documentary at Hollywood’s biggest event, Rock made a joke about Smith’s wife, Jada Pinkett Smith, and her hair. Pinkett Smith has suffered hair loss due to alopecia.

Smith responded by storming the stage and hitting Rock across the face with an open-palm strike, before returning to his seat to shout: “Keep my wife’s name out of your mouth.”

The BBC reported the following month that Smith had been banned from the Oscars gala, amid backlash to the incident.

The UK broadcaster added that big studios like Sony and Netflix had paused their projects with the Hollywood actor.

While a low ebb for Smith, he received support from an unlikely ally.

Mayweather, Smith said during a private screening for his film Emancipation, routinely called him to check in and ensure he was OK.

“I want to say something also about Floyd,” Smith said. “We’ve met each other, we’ve seen each other around, but we weren’t, like, friends.

“And, the day after the Oscars, for 10 days he called me every day.”

Smith continued: “That was every day he called me, and it’s like, that’s my dude forever right there.”

Mayweather participates in a boxing exhibition this month

Mayweather remains a focal presence in boxing and returns to the ring November 13 at the Coca-Cola Arena in Dubai for a DAZN pay-per-view exhibition against content creator Deji, organized by Global Titans.

At a Las Vegas press conference at the Mayweather Boxing Club in Las Vegas last month, Deji said: “I’m here to have fun and showcase my skills. We’ll see what happens in the ring on November 13.

“I always want to encourage people to never give up. I was a guy who people always doubted. But I made sure that I worked hard and carried on, because I’m never going to give up.

“I want to show Floyd that I’m really bringing something to the table with this fight.”