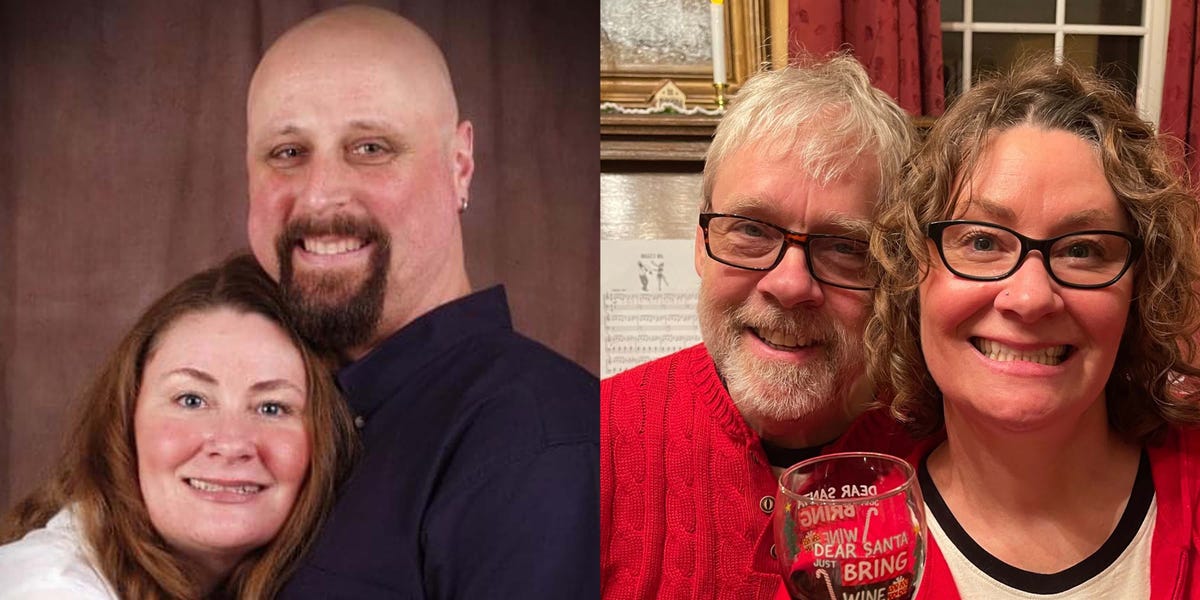 Deirdre Fagan was sure Bob would be her last husband.

Her first marriage was all about passion, her second was too friendship-focused. As soon as she met Bob, while they studied together as graduate students at the University at Albany, something clicked. This is what it feels like to have the right combination of both qualities, she thought.

In 2011, nearly 10 years after they married, Bob was diagnosed with the terminal illness amyotrophic lateral sclerosis (ALS), and given less than a year to live. He was just 43 years old.

“It was as though somebody pulled up in the driveway and said he’d been killed in an accident. I mean, the news hits you in the same way,” Fagan, whose brother and father died in a car crash, told Insider.

She couldn’t eat, and remembers drinking a lot of wine, picking up a cigarette-smoking habit, and crying. They had necessary, heart-wrenching conversations about finances, funeral plans, the day-to-day lives of their two young children.

But it was Bob who nudged her to consider the elephant in the room: the life she would have without him. He suggested that she find a new partner in his final year. That was important to Fagan; she wanted her new lover to know Bob, too.

“I loved him so much and he was so central to my life and always will be, so it made me sad that he would just be stories for somebody else, and they could never know him themselves,” Fagan, who writes about the family she created with Bob in her upcoming book “Find a Place for Me,” told Insider.

Though the process was messy and emotionally overwhelming, it resulted in Fagan falling in love with her co-worker Dave. They’ve been married for more than seven years and together for 10.

Grieving her husband while he was still alive

According to Fagan, she and Bob didn’t subscribe to the idea of soulmates. Instead, they felt grateful to have met each other after growing from past relationships. That shared perspective on love gave her hope.

When Bob was first diagnosed with ALS, also known as Lou Gehrig’s disease, on December 29, 2011, Fagan wrote that she went through the “deepest denial” she’s ever experienced.

She didn’t want Bob to be reduced to a story she tells. Fagan already experienced that with her siblings and parents, who all died by the time she was 36.

It took her four months, the halfway point between Bob’s diagnosis and death, to accept the reality, she said. By this point, Bob’s fine motor skills and energy began to weaken, and his speech started to become strained and slurred. He couldn’t pick up his children, open water bottles, or hold a sponge to clean dishes, Fagan wrote.

“It made me sad to realize the next person I would fall in love with would likely not know either of my parents, my siblings, or Bob. I wished that wasn’t the case, but I also knew I had no control over that,” Fagan, who was 42 at the time of Bob’s diagnosis, said.

Her new lover didn’t compete with her husband

Once Fagan reconciled with the understanding that Bob would not be around anymore, she asked her late brother’s best friend if he’d consider a relationship with her, and being a father to her children. He already knew her, her kids, and Bob. He said he’d rather just be friends.

During the last few months of Bob’s life, Fagan grew close to her co-worker Dave at a colleague’s dinner party. It happened organically, and almost by accident, Fagan said.

She and Dave spent a lot of time together — at the school where they both worked as professors, and when he would stop by during his bike rides and between her caregiver duties. He would help out with housework, and they’d talk for hours. Dave would console Fagan when she cried, and laughed at Bob’s jokes about his nice-looking butt.

When they first got together, Fagan said she would default to mentioning how Bob would act, especially if she was upset. Dave always called her out, she said, which was something she appreciated.

Her husband could see their blossoming love, and encouraged it

Over time, Fagan noticed she longed for Dave’s presence. One day, she brought it up with Bob. He said: “I could see it,” and encouraged her to pursue the relationship.

It scared Fagan at first, but that fear dissipated as she saw Dave and Bob getting to know each other, and building a genuine bond. Dave never tried to replace Bob. He also had a clear appreciation for how much love Fagan had for Bob. In fact, that was one of the reasons Dave fell in love with her, she said.

She didn’t have her first kiss with Dave until Bob died. Now, she says Dave is the second love of her life. Together, they parent the two children she had with Bob.

“That special place that only two can occupy, where the world goes away when you are together and the two of you are in your own little couple world, Dave and I have created that, just as Bob and I did,” Fagan said.